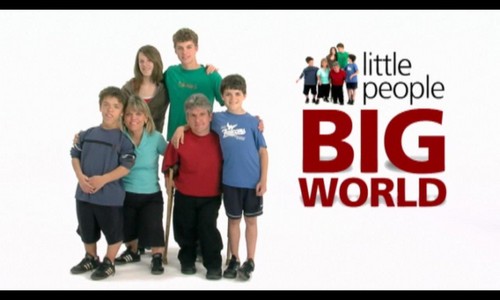 Tonight on TLC Little People, Big World continues with an emotional special that finds the Roloffs facing big changes at the farm: After 26 years of marriage, Matt and Amy have entered into a trial separation.

The series chronicles the lives of the six-member Roloff family farm near Portland, Oregon. Many of the episodes focus on the parents, Matt and Amy, and one of their sons, Zach, who are diagnosed with dwarfism.

On tonight’s episode it’s the holidays and the Roloff Kids are home to celebrate, but the family dynamic has changed dramatically. Matt has moved out of the main house and into the bridal suite, hoping the change will give him and Amy space to work through their issues.

Despite their separation, they are focused on providing their kids with as festive a holiday as possible, and move forward with planning an elaborate party to celebrate New Year’s Eve. Joined by family and friends, Matt and Amy reflect on the importance of their relationship, but wonder if the coming months will bring the changes they each need to see in on order to make the marriage last.

Tonight’s episode is going to be filled with drama and you won’t want to miss it, so be sure to tune in for our live coverage of the show tonight at 9 PM EST! While you wait for our recap check out the sneak peek video of tonight’s special episode below.

On tonight’s episode of Little People Big World, the Roloff is celebrating their first New Years since Matt and Amy separated.  Matt and Amy decided they should throw a huge New Years party while the kids are home to take their minds off the separation.

Matt, Jared, and Zack head out to the garage to build a huge ball  to drop at the party like the ball in Time Square.  They end up with a ball of wire wrapped in Christmas tree lights, and a broken fishing pole.  Their ball needs some work.

Matt’s parents arrive in town for the New Years party, Matt gives them a tour of his new house where he has been living since he and Amy separated.  He tells his parents that hopefully his absence makes Amy’s heart grow fonder.  His Mom points out that if he’s not living at home her heart may grow fonder of someone else.

Molly, Jeremy, and Jacob head over to their brother Zack’s house, he shows them around and then makes them hamburgers for dinner.  They all sit down and eat together and discuss their parents and their lives.  Molly can’t wait to get her own house like Zack and move out of the college dorms.

Matt is having a poker night and has invited some guys over to hang out with him and his Dad.  His Mom heads out to visit some friends while she is in town.  Matt’s Dad lectures him about separating from Amy.  Matt heads over to his house to get some ice trays and a chip bowl from Amy’s house.  He jokes to Amy that he should get “half of their bowls.”  Amy thinks that Matt is “running away from his problems” by moving into a different house.

Amy is getting dressed and going out for a “night on the town” with her friends.  Molly approves of her Mom’s outfit.  Meanwhile, over at his own house Matt is playing poker with his buddies.   Matt confesses that he knows he is being selfish by “wanting his own space” away form Amy.  He has no intention of getting a divorce, he is just “rehealing” and doesn’t want to fight with Amy every day.

Amy heads out to dinner with her two friends Lisa and Lisa.  Amy reveals to her friends that Matt decided to move out, and they are officially separated, after 26 years of marriage.  She is scared because they don’t have a plan, and Matt has already been gone for a little over a month.  She tells her friends she is going through a grieving process, and she has no idea what she is doing.

It’s almost time for the Roloff’s New Years Party, The whole family comes together to clean out the garage and decorate and build props.  The boys are building a photo booth for guests to take pictures inside, and they are making another attempt at a New Years Ball to drop.

Molly and Amy head to the kitchen to make a New Years Eve cake.  Jared and his girlfriend Aubrey are busy building a wall for their friends to write their New Years resolutions on, and they still have to build the backdrop for the photo-booth.  Matt decides to surprise his kids and dress up as “Father Time” for the night.  He is disappointed when his costume “isn’t a hit” with his kids, so he heads home to change.

The party begins in 1 hour, Matt arrives at the garage and all of his kids are gone and the decorations still haven’t been set up.  The guests begin to arrive and help them finish hanging the balloons.  Matt is annoyed, and tells Zack that the kids didn’t have their “act together.”  Zack is annoyed because his Dad hasn’t been living at home, and he doesn’t realize how “they roll.”  Matt realized that there were a lot of logistical problems trying to coordinate between his house and their house and who was doing what for the party.

Finally the party kicks off and everyone has a good time, Matt realizes it is about the “big picture” and making sure the kids have a good time.  He makes A New Years resolution not to “sweat the small stuff.”

Midnight is only 5 minutes away, Matt gathers all of their guests outside and plugs in the ball.  But, he blows the breaker, and all of the lights turn off.  One of the kids flips the breaker switch and the ball turns back on.  They countdown to midnight and slowly lower the ball, the party-goers love it.  After the ball drops Matt asks Amy for a kiss, and she says “no.”

The next day Matt parents head over to Amy’s house to spend some time with their grandchildren before they head home.  Matt even comes over and they all sit down for dinner together.