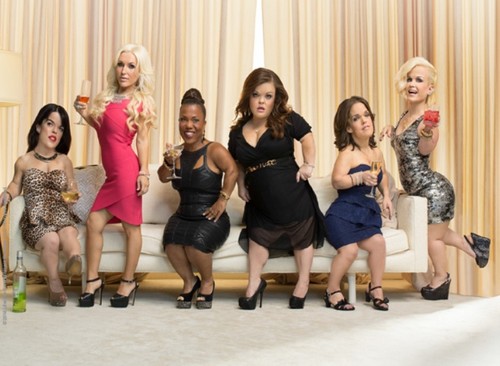 Tonight on Lifetime LITTLE WOMEN LA airs with their season 1 finale episode called, “Here Comes the Bride.” On tonight’s episode, Christy finalizes her last minute wedding details, from the dress and flower arrangements, to the venue and quickly realizes her mother is a “momzilla.”

On the last episode the little women visited “Sin City” and they were determined to give Las Vegas a run for its money while celebrating Traci and Christy’s bachelorette parties. The women bought Traci a few drinks to see if they can loosen her up and were blown away by her hidden wild side. The men joined the ladies in Vegas and in a spur of the moment decision Christy decided she wanted to elope, but would Todd go along for the ride?

On tonight’s episode, Christy finalizes her last minute wedding details, from the dress and flower arrangements, to the venue and quickly realizes her mother is a “momzilla.” With wedding bells in the air, Terra and Joe feel pressure to discuss if they are really meant to be together. The ladies speculate why Elena isn’t drinking…could there be a baby on the way?

Tonight’s episode is going to be a fun one, which you won’t want to miss. So be sure to tune in for our live coverage of Lifetime’s Little Women LA Season 1 Finale— tonight at 10PM EST!

Tonight’s episode of Little Women LA begins with Christy and her friends headed to the dress shop to get fitted for her wedding dress, Briana thinks that she looks elegant. Christy confesses that the dress is actually a short dress on an average sized person. She goes over her venue and wedding plans with Briana and Elena. Christy is nervous because she is going to meet Todd’s parents for the first time tonight, they are flying in from Ohio.

At Terra’s house she invited some of “the gang” over to relax in her pool. They all gossip about Todd and Christy’s wedding. Tonya will be bringing her Trevone with her to the wedding. Terra begins questioning them about whether their relationship is official, Tonya is annoyed that Terra is always in in her business. So, she puts Terra and her boyfriend Joe in the hot seat and ask them when they are going to get married, after all they already live together. Joe and Terra begin arguing about why or when he is going to propose.

Christy is sitting at the restaurant with her parents, waiting for Todd to arrive with his parents. She lectures them and tells them not embarrass her. As soon as Todd arrives with his family, Christy’s mom begins telling them about when Christy used to work in Las Vegas and guys would shove tips down her shirt. As if that isn’t embarrassing enough, she begins telling Todd’s parents about how rotten Christy’s ex-husband was, and says that she wishes she had hired a hit man on him. Todd’s parents are sitting there staring at Christy and her parents, in awe. Finally they warm up to Christy’s crazy parents, and begin bonding over how they found out their children were little people.

The next day Christy has all of her friends over to help her set up for the rehearsal dinner. Elena refuses to drink alcohol, and confesses that she is trying to get pregnant. They begin discussing what it is like for little women to have sex with average sized men. Elena says she likes to be picked up and “spun like a top.”

It’s a day before the wedding, and Christy and Todd are shopping. Christy wants to buy gifts for her bridesmaids, but Todd is annoyed she is spending so much money on the wedding. She asks him if he has written his vows, he confesses that he got them off the internet, but insists they are perfect. Christy freaks out, because vows are supposed to be for the rest of their lives, and says that she thought she “meant more to him.”

It’s time for the rehearsal dinner, and all of Christy and Todd’s family and friends show up. Elena isn’t drinking again, and Briana is convinced she must be pregnant. Meanwhile, Christy confesses to her guests that her brother lives five minutes away and refuses to come to her wedding. Her brother is “old-fashioned” and thinks that it is a sin that she and Todd were living together before she got married.

It’s finally Christy and Todd’s wedding day. The bests begin arriving on the beach where they will be getting married. Terra shows up without Joe and tells everyone he has an upset stomach, Elena isn’t buying it though. She thinks Joe just didn’t feel like coming and that Terra deserves a better man in her life.

Christy heads down the aisle to Todd and they begin the ceremony. Todd recites the vows that he memorized off from the internet, and then Christy takes out her cell phone and reads the vows to him that she wrote herself. When they are done with their vows they kiss and exchange rings, and they are officially married.

At the wedding reception everyone wants to know where Joe is, Terra is really disappointed that he didn’t come with her. They begin asking Terra when she and Joe are going to get married. Terra said that she wants children more than she wants to get married. Elena isn’t buying it though, she knows that deep down Terra wants a wedding. Terra gets upset and leaves the table and all of her friends gossip about her relationship with Joe.

Later on Tonya corners Elena’s husband Preston and asks him if they are going to have a baby. Elena flips out on her and tells her it is weird that she is asking her man personal things like that. They make up eventually and Elena tells her that if she is pregnant she will be the first to know.

At the end of the reception, Todd and Christy ride off in their “Just Married” car, and wave goodbye to their friends and family.