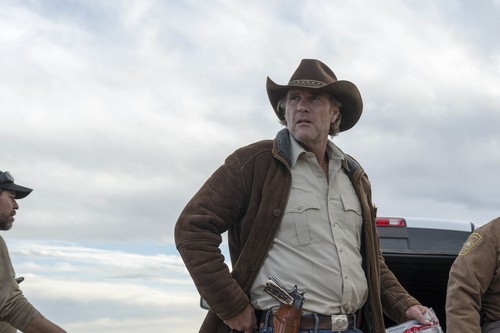 Longmire returns to A&E tonight with its season 3 premiere. On tonight’s episode called “The White Warrior,” in the season three premiere, Walt (played by Robert Taylor) shares with fellow lawman Vic (Katee Sackhoff) the truth about the circumstances of his wife’s death, which was not due to cancer but at the hands of a killer.

For those of you who are not familiar with Longmire, the show centers on Walt Longmire, a Wyoming county sheriff who returns to work after his wife’s death. Assisted by his friends and his daughter, Longmire investigates major crimes within his jurisdiction, while campaigning for re-election.

On tonight’s episode in the season three premiere, Walt deals with the aftermath of Henry’s arrest and Branch’s shooting. The search for the shooter however is complicated by Deputy Branch’s insistence that it was someone known to be dead.

Tonight’s episode begins with Longmire bringing Branch to a res clinic as he is in need of serious medical attention for help, dropping him off to a clinic and helping to stitch him with fishing wire. When asked what he had done to him, Longmore replied “I did what I could.”

Shortly after, Longmire is riding next toi Officer Mathias and orders him to pull over. He won’t stop, flipping Longmire off. Mathias finally pulls over and Longmire tell him he wants to talk to Henry. He wants to help him. Just when he is getting information out of Henry and Henry shares that he didn’t want Longmire to take the blame for a murder her didn’t commit, Mathias continues to transport him for extradition.

Longmire returns to the station and everyone asks what the hell happened there as something obviously went down. Everyone is upset. He asks Ruby to get him an attorney. When Vic calms everyone down, she tells Walt to open up to her and tell her what is going on. He tells her that his wife didn’t die of cancer, she was murdered by a man named Miller Beck. He claims he is already dead.

Walt shares that Branch got shot, and lost a lot of blood. He and Vic head to the hospital to see him and are met by his father, who is very upset at Longmire for putting his son in harm’s way. While waiting in the hospital, the surgeon comes out and asks Longmire to follow him. He shares that he found a crow feather that was placed under his muscle tissue. Longmire confirms someone must have placed it there.

Later, Branch wakes up and sees his nurse get pulled from a man behind a curtain who puts a knife to her throat. Just then, however, he wakes up to find his father there. He shares that Longmire is there to ask questions. He asks Branch about something he said after he was shot. He wondered what he meant by being shot by a dead man. He says he was shot by David Bridges, the guy from the suicide video. The same man he just envisioned killing his nurse. He describes the eerie scene and creepy Ridges. He shares that David had feathers on him. While Longmire confirms that David is dead, Branch says he is not crazy, and that Davis is alive and the one who shot him. He asked if Longmire picked up the evidence Branch collected from the scene, but Longmire shares he was too focused on getting him help. Branch tells him that he needs to get that evidence.

Longmire goes to see Jacob. Jacob shares that he knows he must be there to talk about the conversation he had with Branch about David. He says that what he did was purely out of honoring David’s wishes. Longmire counters that burning his body on the platform doesn’t fall in line with Cheyenne tradition, but Jacob shares that David followed all types of beliefs and traditions. Longmire tells him that Branch said he threatened him, but Jacob chooses his words carefully and calls it a “warning.” When Longmire asks if he shot Branch, he claims he did not and tells him he has an alibi if needed. Longmire pushes, “How about David, did he shoot branch?” Jacob tells him that David has an even better alibi…he is dead. Longmire says that Branch saw him and described how he looked. When Jacob hears the description his face goes white and his jaw drops. He mutters, “The White Warrior.” Jacob asks if Walt is religious. He then says he burned David’s body and he saw him dead. He says that he saw him come back and that he travelled through time. He tells Jacob to keep the information about the location to himself, because although Jacob claims it is a sacred burial ground, Longmire shares that it is also a crime scene.

Back at the station, Vic says that she is sorry to hear about what happened to Walt’s wife. He tells Vic to get out to where Branch got shot. Ferg and Longmire head out to the scene as well and begin searching for clues. Mathias comes up very upset, claiming that this is sacred ground and his jurisdiction. He tells him he must leave now and he won’t press charges. Mathias warns them not to come back, because he is not leaving. They didn’t leave empty handed, though. Ferg has evidence that stuck right to the bottom of his shoe.

Longmire is on his way to see Henry in jail. Ruby chastises him for not keeping her apprised of his whereabouts. Ruby connects him with the doctor who was on the line holding for him. He shares that Peyote was in Branch’s system. Longmire believes the feather was laced with it. At the jail, Henry is brought out to talk to Longmire. Henry shares he didn’t feel it was necessary to keep fighting and this is why he signed the extradition waiver. Longmire tells him that even if he is not willing to fight for himself, he needs to do it for his wife. Henry tells Longmire to get a lawyer. He can use Henry’s money that is in a safe. He tells Longmire there should be $40,000 in a safe. Longmire tells him there is only about $1,200. In there.

Henry is shocked. Longmire asks if anyone else has the combination to the safe. Looking betrayed, Henry says, “Deena.” He asks why Longmire was covered in blood and he tells him that Branch was shot. When he pries for details, Longmire gives the description Branch gave him and Henry confirms as Jacob did…The White Warrior. He tells Longmire he is dealing with some very bad medicine. Just then, Longmire is told that time is up.

Coming up on a crime scene, Vic is told that Hector escaped. He is gone. Shortly after, Longmire meets with Jacob and he asks where Hector is. Jacob said they haven’t had a relationship in a while. Jacob tells Longmire that he has a feeling this is about Henry. He tells Walt not to wait by his phone for him to call with any information. Longmire, on his way out, happens to see a sort of ornament with crow feathers. Jacob yells at him not to touch it.

Longmire goes to visit Branch. His father opens the door and talk about Branch’s mother, who he hasn’t talked to in a while until now as she called to yell at him for what happened. Longmire tells him that he doesn’t have any leads, but he has a notion. He believes Branch was not the target, but that someone was using Branch to get to his father. Just then Branch’s father pulls out a gun and tells Walt to get to whoever it is before he does.

In the hospital, Branch thinks he is confronted by David and begins choking him, but then snaps out of it to realize that it was Katie. She is very freaked out but Branch tells her not to say anything. Longmire shows up and tells him that while he believes he is not lying and believes he thinks he saw David, he was not in the right frame of mind because he was on Peyote. He tells Branch he cannot investigate any further because he is no longer allowed on the res. Branch tells him he must not believe him or he’d keep fighting.

Walt heads back to the crime scene. He waits a while and then heads to Mathias’ house after seeing something going on near the funeral parlor. He asks for permission to be allowed on the grounds. Mathias is very upset and tells him his request is denied, then closes the door on him. Longmire persists and tells him what he saw, but Mathias is still not budging. Finally, Mathias agrees to go with him to see what is going on. There is a ritual of some sort going on and they force their way in and stop the ceremony and question the men with painted faces about David and Jacob. Vic brings Branch to the scene so that he might be able to identify the one he saw. Branch looks at all the men and confirms that the man who shot him is not one of the men they are questioning. They set them free. Walt tells Branch that the ashes Branch collected were David’s. Branch remains firm, telling Longmire, “I know what I saw.” For now, we are left to wonder if the it was a ghost or a man who shot Branch. This is a great season opener!

What did you think of the first episode of the new season? Tell us below!