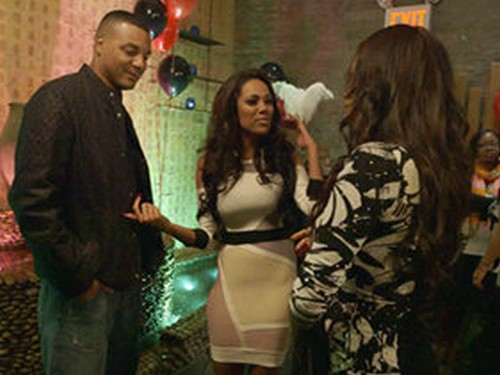 Tonight on VH1 LOVE & HIP HOP continues with a brand new episode called, “Red Alert.”  On tonight’s show a territorial battle ensues between Erica Mena and a new rival.  Did you watch last week’s show?  We did and we recapped it here for you.

On last week’s show Tahiry and Rashidah clashed while Erica Mena and a new rival fight for territory. Joe decided to stake his claim as Tara and K. Michelle took the plunge on a double date. Rich finally admitted his love.

On tonight’s episode Joe proposes to Tahiry in Times Square as Rich confronts Cyn and Erica Mena at her book premiere. Saigon and Erica Jean get a blessing while Peter and Amina have a kid crisis. Yandy stays strong while Tara calls it quits.

Joe went down on one knee and proposed to Tahiry. And her answer was “no”. She said he went from zero to a hundred with her. He never worried about the in between moments because he was trying to skip them. He hasn’t put in any work to get her to trust him again. As a matter of fact it was two weeks ago he was seen hanging around with a stripper. How is a ring supposed to suddenly change that?

Tahiry turned him down and Joe calmly walked away. He thought the ring would be enough and it wasn’t. Even though it’s what Tahiry had been dreaming about for year too much has gone by.

Saigon and Peter were hanging out when they began talking about their home lives. Peter felt Tara showing up at Rich’s party was for his benefit. He said she showed up dressed in the tightest outfits just to make him jealous. And some of it must have worked seeing as he’s still talking about her. Saigon on the other hand talked about his son and Erica Jean. He told Peter he invited Erica to live with him. He said he wanted to get to know her as well as have their son grow up in a loving atmosphere. Peter feels like maybe he should man up too. His home life had been crazy with Amira and Tara.

Saigon knew that he had to make peace with Erica Jean’s father. The other man had stepped up and taken care of his daughter during her pregnancy while Saigon made he was busy elsewhere. Saigon went to the older man and asked his permission to live with Erica Jean and their son. The older man agreed to give his consent. He liked that Saigon showed him respect and he appreciated how much Saigon wanted to be a father.

Erica is planning a party for her girlfriend, Cyn. Cyn has had her fill of jewelry and wanted to feel special. So Erica is throwing a hug and lavish party in her honor. Before she can do that though she has to focus on launching her newest book.  Rashidah helped her throw a launch party and Erica just happened to have invited Rich to it. She did it out of courtesy but she actually expected him to show up. She only got Cyn to believe in her recently. She had to promise she wasn’t on the fence and was fully committed to Cyn.

Then Rich shows up. It was awkward after confessed his feelings last time and she wanted them to be friends again. She told him how she’ll always love and nothing was going to change that. Even if she did turn him down. They were only talking when Cyn interrupted them. She said  she needed to have a talk with Rich. What she did was basically insult him over and over again. With a don’t cross the line in the studio. There was only so much Rich was going to take before he attacked.

He went off on Cyn accusing her of being a piece of trash Erica picked up one day. He was tired of her calling him names and Erica was refusing to check her. Erica pulled him out of the club to talk when he began kissing her. He tried to show her he was the one she should be with. Erica told him to leave instead. But would she have told him differently if Cyn hadn’t once again interrupted? Within the next couple of days, Erica and Rich were joking and laughing like nothing happened.

Tara wasn’t trying to make Peter jealous. She wanted to move on without having to see him and in all honest left the party earlier just she wouldn’t run into him. Tara is over Peter and Peter is thinking about the choice he made. He and Amira were looking at apartments when he told her he didn’t want to buy it yet. Amira had freaked him out when she began assigning rooms as baby rooms. Out of nowhere, he begins thinking about how he has kids in all of these houses and he’s never really been by himself. He’s always hopped from one relationship to another. So having more kids are big deal to him. Amira listens to him and realizes he isn’t ready to commit fully to her. She tells him he needs to figure out what he wants and maybe she’ll still be there when he makes a decision.

Saigon and Erica are moving in together and they are in a fully committed relationship. As in their officially exclusive and Saigon wants to start having sex again. Since proving himself to her he hasn’t been with any other women.

Tahiry went to see Joe’s mom. Joe and his family were hoping that Tahiry didn’t mean “no” forever. They thought maybe she meant until he won back her trust. When as it turns out Tahiry did mean they’re over. She just didn’t realize it until she spoke to his mom. She gave Joe 9 years and she doesn’t want to give him anymore.

Peter went over to Tara’s. He wasn’t trying to her back or anything like that. He simply wanted to apologize. He knew how much he must have hurt her in order for her to call it quits. He told her he was sorry and that he wasn’t going to hurt her again. That’s it. No please give me another chance. He said sorry and then he left.

But let’s see what he’ll do next week.