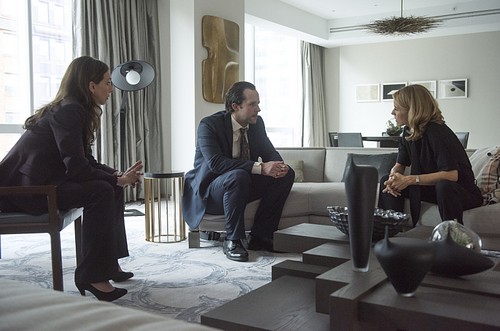 Tonight on CBS Madam Secretary airs with an all new Sunday November 16, season 1 episode 9 called, “So It Goes.” On tonight’s Elizabeth [Téa Leoni] , Henry [Tim Daly] and Isabelle [Marin Hinkle] launch their own investigation into the plane crash that killed former Secretary of State Vincent Marsh. Meanwhile, Nadine [Bebe Neuwirth] reenters the dating scene after agreeing to go out with a NASA scientist.

On the last episode, when the President approved Henry’s reactivation into the NSA, he lied to Elizabeth about his continued involvement in the spy game. Meanwhile, Matt and Daisy’s antagonism toward one another began to affect the entire office. Did you watch the last episode? If you missed it, we have a full and detailed recap right here for you.

On tonight’s episode as per the CBS synopsis, “Elizabeth, Henry and Isabelle launch their own investigation into the plane crash that killed former Secretary of State Vincent Marsh. Also, Nadine takes a step back into the dating pool when she agrees to go on a date with a NASA scientist.”

Tonight’s episode of Madame Secretary kicks off with a flashback to six months ago, Matt, Daisy, and Nadine are briefing Marsh on talks with the Iranians.  After he excuses them he asks Matt about the status of a speech he requested.  Matt warns him that the administration isn’t happy with the policies.  After he leaves the office, Nadine corners Matt and wants to know what their secret pow-wow was about.

Nadine heads back in to Marsh’s office once the coast is clear and he takes her hand and apologizes to her and says that he has to cancel their weekend.  Nadine thinks it is because of his wife, he reassures her he has to deal with a personal family estate matter involving a cattle ranch and they kiss.

Marsh boards a plane heading to Colorado – the plane hits turbulence and the power begins going out and the passengers are being thrown about.  He heads to the pilot’s cockpit, and the pilot informs him he has lost all control of the plane and they are going down.  Marsh replies calmly, “And so it goes.”

Elizabeth and Henry are listening to the tape recordings of the pilot the night that the plane went down.  George was convinced that it was sabotaged, and someone tampered with the plane, and she is beginning to think he is right.  There are five maintenance men who had access to the plane and could be responsible.

In bed later that night Elizabeth begins to have second thoughts.  She is afraid that whoever sabotaged Marsh’s plane will come after her next, and she is worried about the kids.  Henry reasons that it isn’t safe for their family not to look in to it – she needs to learn who her enemy is and who took out the last secretary of state.

The next morning Henry and Elizabeth head downstairs where the kids are getting ready for school.  Henry tells Alison that he can’t make it to her soccer game and she whines it is the quarter finals.  Elizabeth announces that she will go – Alison reminds her that her security guy said she couldn’t go to her games, but Elizabeth doesn’t care.

Elizabeth heads to work and Russell is waiting for her in her office. He wants to know why she was snooping around the Marshall report and the maintenance guys that worked on the plane. He warns her not to go sticking her nose where it doesn’t belong – and she throws him out of her office.
Elizabeth’s head of security, Fred, is not happy that she is planning on going to her daughter’s soccer game.  He looks at a map of the field’s location and says it isn’t happening.  Elizabeth tells him to take whatever embarrassing security precautions necessary – she has to be at the game.

Elizabeth tells Matt and Nadine to cancel her meeting with the Naroons and call in the Israel delegates.  They are in an uproar and have no idea how they are going to pull it together in less than a day.  Matt receives a mysterious text and says he has to go – he meets Russell under a bridge.  Matt informs him he isn’t spying on Elizabeth like he did Marsh because Elizabeth isn’t doing anything wrong and isn’t conspiring against the president.  Russell promises him an office in the West Wing if he spills what she is up to.

Henry has a theory, he thinks that maybe the faulty screw  is what actually caused the turbulence.  No one investigated the crash because the pilot reported turbulence – but what if the faulty plain part that was tampered with is actually what caused the pilot to lose control and he mistaken it for turbulence.

Elizabeth heads to work the next day and is surprised by Glenn, the administrator of NASA.  He announces he needs her help with time travel.  They are launching a new telescope that will be able to see backward in time – they have to place it on a remote island exactly on the equator in order for it to work.  And, they had planned to place it in Nauru, but now the Nauruans are threatening to cancel the contract because Elizabeth cancelled their meeting.  He ask Elizabeth to make it right with Nauru.

Elizabeth meets with the Isreal delegates.  She remembered in 2003 that Israel caused a plane accident similar to Marsh’s crash.  She takes aside one of the men after their meeting and asks him about the 2003 Dubai crash.  He confirms that they removed the same screw that was damaged on Marsh’s plane so that the pilot would report it as turbulence – just like Marsh’s pilot did.

Elizabeth gets a lead on the feuling technician on Marsh’s plane – and learns that John Castalano has a hidden bank account in the Cayman Islands – and a day before Marsh’s crash $500,000 was deposited in to the account from an untraceable party.  Elizabeth is certain that if she gets Castalano into a room she will be able to break him ad get him to confess to causing Marsh’s accident.

Glenn stops by Nadine’s office and thanks her for “making nice” with Nauru.  Now the telescope is back on track and the president and prime minister are “over the moon” about the launch.  Glenn flirts with Nadine and asks her out to lunch – but she explains she doesn’t have any time…ever.  Glenn takes the hint and realizes she isn’t interested.

Elizabeth arrives at her daughter’s soccer game, with a parade of undercover security guards in tow with baseball hats and sunglasses.  They have a tent set up by the field – Elizabeth takes Allison inside the tent and says that she has to ask her for a favor.  Afterwards, Fred and Elizabeth rush off.

Elizabeth arrives at a hotel where Laura has tricked John Castalano in to coming for an interview.  John is noticeably shaken when Elizabeth shows up and she cuts right to the chase and demands to know if he killed Secretary Marsh.  Elizabeth promises John that if he tells her who ordered him to sabotage the plane she will make sure he is treated fairly.  John cries that he got a phone call telling him that his daughter was in danger, and they sent him a video of his four year old daughter with lasers pointed at her in a school play.  He has no idea who the people are – and he didn’t even touch the money that they sent them.  Elizabeth says that she is going to let him go, as long as he promises not to tip off the person that ordered him to assassinate the secretary.  She will have Barnes search his phones and computer for clues to who the mysterious person was that gave him the orders.

Nadine receives a bouquet of flowers with a sweet card from Glenn.  Elizabeth returns to the office and Matt corners her and says he needs to talk to her.  He confesses that he spied on Marsh for Jackson – and Marsh was planning on running against Dalton and Jackson didn’t take the news well.  Jackson paid Marsh a visit and promised him that there would be consequences, and when Jackson walked out after threatening him he said “and so it goes.”  Matt confesses that he thinks that Jackson and the president might have had something to do with Marsh’s crash, and now Jackson wants Matt to start spying on Elizabeth.  Elizabeth tells Matt to spy on her for Jackson – she is going to use him as a double agent.