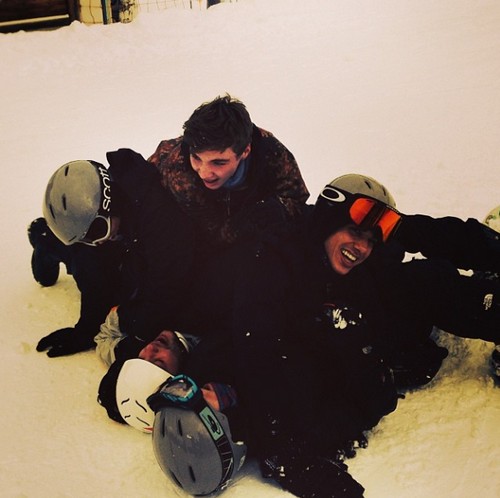 See, this is the issue with celebrities. They live in their little bubble of self-containment, and they never think they’re ever wrong. In this particular scenario, Madonna was [rightly] criticized for posting pictures of her very young son with alcohol.

Madonna is currently vacationing with her family in the Alps, and she Instagrammed a picture of her 13-year-old son Rocco and his friends holding bottles of alcohol. Again, for effect – Rocco is 13! She captioned the picture, “The party has just begun! Bring it! 2014.”

A lot of people understandably criticized Madonna for promoting underage drinking, with kids holding alcohol bottles, especially with someone who isn’t even technically a teenager, but she doesn’t seem to think she’s done anything wrong. She ended up hitting back at her critics, writing, “No one was drinking we were just having fun! Calm down and get a sense of humor! Don’t start the year off with judgment!”

Right, no one was drinking. And that’s why they were holding bottles of alcohol? Also, children drinking or even holding bottles of alcohol has nothing to do with getting a sense of humor. As a celebrity, Madonna should realize that she’s setting an example for many others who look to her as a role model. She’s setting a terrible example by showing pictures of her kids with alcohol, whether they actually drank it or not.

Also, she would have been better off apologizing, instead of trying to fight the critics. There’s no way she’s going to win this, regardless of how much she tries to pretend as though she didn’t do anything wrong.

What do you guys think? Should Madonna have been criticized for uploading those pictures and even allowing her kids to hold bottles of booze? Let us know your thoughts in the comments.