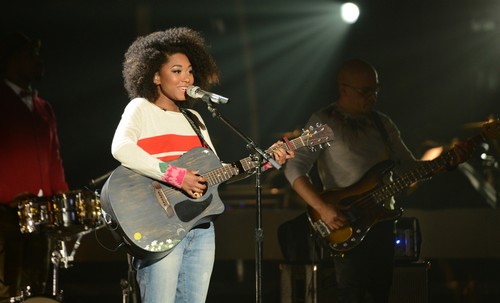 Majesty Rose sang, “Shake It Out” by Florence And The Machine for her song choice for the “(I’m With The) BAND!”– themed performance show. The IDOL hopefuls will act as the lead singer for Rickey Minor and his band, performing their favorite songs. Did you watch tonight’s performance show?  Just in case you missed tonight’s show we have you covered and you can read our full and detailed recap here!

On last week’s episode Majesty sang “Wake Me Up” by Avicii/Aloe Blacc and Jennifer liked her rendition saying, –  “Tonight I saw something in you I have never seen before, fear. I think last night really affected you, but you gotta come back the next time and you can’t let it effect you. Half way through you were the Majesty we love to hear, I don’t ever wanna see that other girl again.”