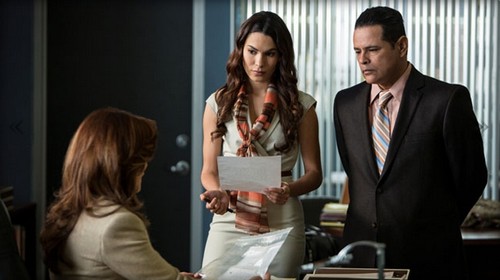 MAJOR CRIMES TNT’s hit drama series returns tonight with a brand new episode called, “Return to Sender Part 2.”  On tonight’s show in the conclusion of the two-part story the squad inches closer to catching a menacing serial killer in the Season 2 finale.  Did you watch last week’s episode?  If you missed it we did and we have a full and detailed recap, right here.

On last week’s show the squad must work quickly to track down a serial killer before he struck again. Meanwhile, things got dangerous over a game of chess. Malcolm-Jamal Warner guest starred.

On tonight’s show the squad inches closer to catching a menacing serial killer in the Season 2 finale. Also: Rusty takes a brave stand, and the team clashes with a morally challenged attorney (Jeri Ryan).

Tonight’s season finale of Major Crimes opens with Rusty running through the woods, he is being chased by a man in a ski mask. Rusty wakes up on a couch covered in plastic, and realizes he is in the room with the man that tried to kill him for Philip Stroh. He tries to get up and run but he is glued to the plastic on the couch. It was all just a nightmare, Rusty wakes up and realizes he is with Leo on Lt. Provenza’s couch.

Rusty is scared that the killer is going to come after him again before he takes the stand. Provenza reassures him they have the suspects DNA, prints, and the bullets from his gun, and they are going to find him.

Meanwhile the suspect is at work, it looks like he is a counselor for troubled boys. His boss is urging him to take a vacation, and stop worrying about a troubled boy named “Tyler.”

Linda Rothman, Philip Stroh’s attorney, pays Raydor and her team a visit. Rothman says she has heard a “deranged young man is trying to kill their material witness.” She wants to cut a deal with them, and she says she may know who the killer is. She gives them a list of six names, and hints that one of them is the man that tried to kill Rusty. Rothman gives Rios a copy of the deal she is trying to get them to accept.

Rios turns down her offer, because they have found a hit in the DNA database. The killer’s mother is serving a 20 year drug sentence in prison.

Rusty and Lt. Provenza are at court, getting ready to go before the judge. Rusty is upset because he has to go into the court room by himself, and Provenza can’t accompany him. Rusty just wants to go home. Provenza tells Rusty to be “completely honest,” if he tells any lies Stroh’s lawyers will be able to discredit him. Rusty heads into court and stakes the stand. DDA Rios begins questioning him.

Meanwhile Raydor is interviewing the mother of Ryan Mills. She is coming up for parole, and Flynn tells her if she doesn’t cooperate she will serve another five years in prison. She reveals that she met a man named Henry Jinx, and he took her and Ryan in. She confesses that she let Henry sleep with her son, who was only 14, in exchange for drugs. After a while Henry stopped bringing home drugs, he gave her $20,000.00 to leave town and give Ryan to him. And, she did. She came back a few months later to try and find Ryan, but Henry had taken him and moved away.

Ryan Lewis, the killer, has found Tyler the missing boy he counsels. He tells Tyler that he “has to leave LA.” Ryan tells Tyler that “there is a guy he owes a favor to, but he couldn’t do it.” Tyler wants Ryan to take him with him.

In court DDA Rios is showing the judge the letters that Rusty and Sharon received. The judge refuses to let her enter the letters into evidence. Rios is done questioning Rusty, it’s Stroh’s lawyers’ turn.

Rothman begins questioning Rusty, and makes him admit that he lied to the police about his age, and that he was having sex with men for money.

Meanwhile Raydor and his team are still trying to find Ryan Lewis. They have tracked down all of the couch covers that Ryan used on his murder victims to a homeless shelter where teenage boys live. Sharon and her team head to the shelter. An employee at the shelter directs them to Wade Weller’s office. It is definitely Ryan Lewis’s office, they find the same pencils he uses to write Rusty letters. Sharon pulls his employment records for his address.

Ryan is already back at his house, and he has brought Tyler with him. Ryan is packing his bags, while Tyler sits on his couch and plays plastic video games

Rothman is still questioning Rusty, and trying to prove that he is not mentally stable. Rothman wants to know why he was seeing a therapist, he confesses it was because off the letters he was receiving. Rothman’s plan has backfired, the judge orders to see the letters and add them into evidence.

Sharon Raydor has half of Los Angeles shut down with roadblocks, they are trying to locate Ryan Lewis.

Ryan is stuck in a traffic jam with Tyler in the car. The police issue an Amber Alert for Tyler, and everyone receives it on their cellphones, including Ryan Lewis. He panics and hops out of his car, with his bag, leaving Tyler in the car. Lewis makes a run for it, and Tyler chases after him. Ryan is surrounded by police. He pulls a gun on Tyler and tries to take him hostage. Provenza shoots him directly in the head.

Rusty gets out of court, and Provenza reveals to him that Ryan Lewis is dead. Rusty thanks him for everything he has done for him. Rusty is obviously distraught though, Sharon tries to talk to him. Rusty tells her that he doesn’t think he should live with her anymore. Rusty thinks he is just like Ryan Lewis. Sharon comforts Rusty and tells him that he is coming home with her, he is nothing like Ryan Lewis, and she loves him.