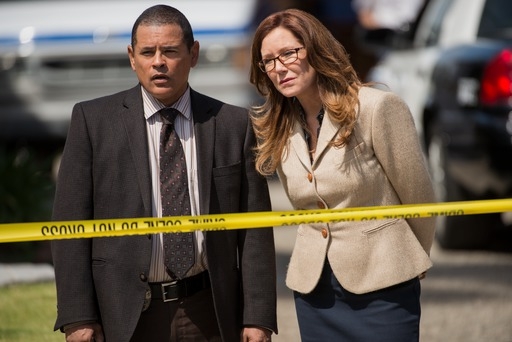 Tonight on TLC Major Crimes airs with a brand new episode. On tonight’s episode “Personal Day”, family secrets surface when a father and his two children go missing. Also, trust issues come into play when Rusty takes suspicious trips on his own.

On the last episode when a father and his two young children went missing, the squad had to work quickly to find them, while uncovering a slew of terrible family secrets along the way. Meanwhile, Raydor did her best to trust Rusty as he begins to take suspicious tripped out on his own. Kathe Mazur guest stars. Did you watch the last episode? If you didn’t we recapped it for you here.

On tonight’s episode Shortly after being released from prison, a man who proclaimed his innocence is found murdered. The victim’s case is reopened and the squad works hard to solve a seventeen-year old murder. To the surprise of Raydor, Rusty confesses the reason behind his recent suspicious activity.

Dante Gomez is being released from prison early. He was given a 20 year sentence and only served 17 for the murder of his girlfriend Anna Escobedo. However, it’s not only his victim’s family that wants him to stay in prison. The real culprit also wants him to be silenced.

Dante was killed a few days into his release.

Before his death, Dante had claimed he was busy robbing a convenience store at the time of Anna’s murder and so he turned to Sanchez to find the real guy. His grandmother is dying and he didn’t want her to die still believing he’s a murderer. So he had asked Sanchez to clear his name. But the squad was overall forced to go slow during their investigation because of their protective witness. They have a witness that swore then and now that Dante was behind Anna’s death.

Caesar said he saw Dante and Anna arguing that night and when he turned away – he heard a gunshot. And Anna was lying on the ground by time he turned around. So, technically, he didn’t actually see the murder just the fallout. Which Raydor was quick to pick up on even though Sanchez had remained doubtable.

Sanchez was on the case back then and he was the one that fingered Dante as the guy. So he also feels partly responsible for Dante’s murder. And why shouldn’t he be seeing as Dante’s grandmother also blames him. Regina Gomez has lost two sons and now a grandson to violence so just like before she’s not expecting much from the police. There isn’t justice for people in her neighborhood.

Leading up to his death, Dante went to everyone in his old neighborhood, appealing his innocence. And he got beat for it. Though that didn’t stop him. For a man that admitted to the murder all those years ago – his sudden change of heart wasn’t believable.

But there was a reason Dante took the rap years ago. He had a robbed the store with his best friend and because he didn’t want to give Hector a third strike – he confessed to a murder he never committed. Only realizing later that he let the real killer free. And Dante’s sacrifice was for nothing. His friend, Hector, lasted less than a year on the outside without him. So he soon joined his friend in prison and out of gratitude protected him while he was in there. Yet Dante’s death changed things. It meant Hector didn’t have to hold on to their secret anymore.

Hector told the detectives he was Dante’s alibi and with his confirmation of events their witness ended up being pushed under the microscope. Caesar account of that night is a complete lie and once confronted with the truth – he told the police that it was Anna’s brothers that made him pretend to be a witness. Which was another lie.
Anna’s brothers beat up Dante, but they weren’t going to risk going to jail over him. And from what they remember about Caesar, they told the police how back in the day that scrawny kid used to be in love with their sister. They even remember how “Shrimpy” showed up at their house the night she died in tears.

Caesar pension for lying though came to an abrupt end when the squad intentionally showed his face to Hector. Knowing he could die if he didn’t have police intervention was what finally pushed him to admit he murdered Anna. He killed her using Dante’s gun all because she rejected him. Anna wanted to be Dante’s girl and no one else’s, but Shrimpy couldn’t live with that.

Then when Dante came out and started asking questions, Caesar killed him too.

He got the protection he wanted, but the damage he left behind was massive. Sanchez went back to Regina Gomez’s place and he told her that her grandson was innocent. Then he told her that he was re-opening the case of her murdered sons. It was time someone finally brought her justice.

As for Raydor, Rusty’s mother is in rehab. Though its court mandated and she didn’t want to burst Rusty bubble with what that could mean. Raydor, even though she doesn’t think rehabilitation is going to work out, tried to be positive for him.

Together they’ll see how Sharon Beck’s addiction will go!