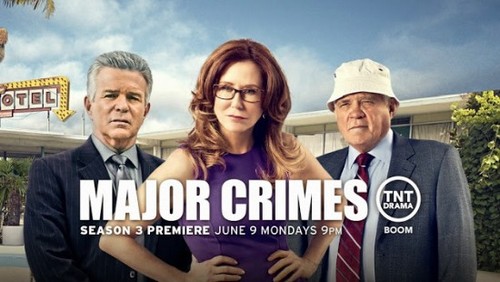 Tonight on TLC Major Crimes airs with a brand new episode. On tonight’s episode called “Jane Doe #38”, a young runaway is murdered, leading the unit on a long, perplexing odyssey to find her killer and discover her identity. Elsewhere, Raydor reaches out to her husband (Tom Berenger) to discuss a big proposition involving Rusty.

On the last episode when a foreigner was found murdered inside his hotel room, the squad had to work quickly to find the killer while avoiding any international repercussions when a U.S. diplomat became involved in the case. While everyone was busy with the case, Rusty tried to figure out how to share a big secret with the squad. Did you watch the last episode?  If you missed it we have a full and detailed recap, right here for you.

On tonight’s episode after finding a young runaway murdered and thrown in a trashcan, the Major Crimes unit is led on a long, puzzling hunt to find the deceased girl’s killer and her identity. Meanwhile Raydor consults her husband (guest star Tom Berenger) about a big proposition she has for Rusty.

Someone had tried to discard a body by shielding it among garbage. Luckily, the garbage collector noticed it before he finished his run.

While the area is considered a rich neighborhood, the victim had bargain basement clothes on. She was just a kid but she was obviously not a rich kid. Her hands had callouses on it and when they eventually found her book bag – they found out she lied about her address. Alice was homeless.

She had most likely run away from home. It appears that someone was abusing her and that could be the reason why the fifteen year old fled. The coroner told the team that the victim was missing several teeth (probably forcefully knocked out) and that she also had cigarette burns on her back. So if she did leave then it wasn’t because she wanted to come out to the coast and find stardom.

Alice death was ruled a drowning. She drowned in someone’s pool and seeing as there was a recent robbery at the neighborhood her body was found – it looks like she could have “borrowed” someone’s pool in order to go swimming along with few other things. However the detective figured out Alice actually knew the people she robbed from. She worked for the owners, including their college age son, as a maid.

So the detectives were left without a choice. They had to bring the son in. They didn’t trust him and after they conducted a brief investigation into his cell phone – they found out the son of the house, Thad, had a thing for Alice. He liked to make videos of surprising her. As if he liked her as in more than merely a friend.

Alice had allegedly stolen several items from their home but the pawn shop that was caught fencing some of these items has surveillance footage. And in it – Thad’s college jacket could be seen and he wasn’t alone. He was fencing some of his household items with a girl named Bug.

Bug used to be a friend of Alice’s.

And even though Alice is still getting blamed for the robbery after her own death, Bug continues to try and fence some of the stolen goods. The detectives arrived at the pawn shop and had attempted to trap her when she saw them and tried to flee with her partner.

Funnily enough her partner decided right at that moment that it was best to abandon her there with the police. He didn’t want to risk going to jail and to make sure Bug wouldn’t say anything about him – he shot her.

Too bad for him, she survived the attempt on her life and wasn’t that scared anymore of ratting him out. The guy that shot her was another friend of hers and Alice’s. His name was Slider and, unlike them, he owned a car. So he sometimes he would let them sleep there and occasionally he would offer Alice a ride to work. But, according to Bug, he wanted to rob the place one day and Alice threatened to call the cops on her friends. She had come to respect her bosses and she didn’t want to risk the relationship by allowing their house to be robbed.

When she refused to let her friends have free reign, Slider killed her. He later said she was ungrateful for all the things he did for her. And Bug had just gone along with his plan. After all she had a drug habit to feed and that wasn’t cheap.

These people were Alice’s friends. She had thought she could trust them and they turned on her the second it became profitable for them.

Bug had given up Slider’s location and the police found his gun and the idiot was still wearing Thad’s college jacket. The one he stole from the house and that had Thad’s DNA all over it. So he couldn’t talk his way out a murder charge even if he begged. But the DA made sure he was going to be tried on First Degree Murder. She didn’t like how slider referred to Alice as trash.

Sadly, the police never did learn Alice’s real name or where she came from. So they held a funeral for amongst themselves.

Lately, Raydor has been considering formally adopting Rusty and it wasn’t until Rusty saw for himself how his life could have turned out (like Alice’s) that he saw how much Raydor must really care for him. She was even going to divorce her husband if he stood in the way of her adopting Rusty. So at least he has someone fighting for him.