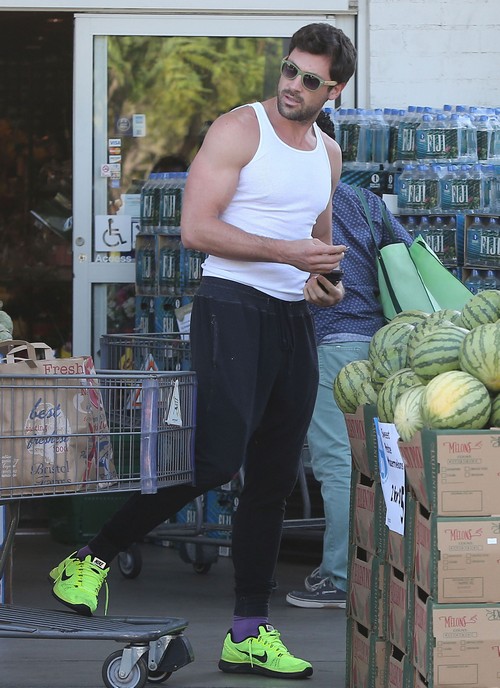 Maksim Chmerkovskiy is using his Dancing With The Stars cred to mack on as many girls as possible, and he’s succeeding. According to OK! Magazine, Maksim is now embroiled in a little love triangle with Kate Upton and Meryl Davis. Forget the fact that Kate already has a new boyfriend, or that she hasn’t been in touch with Maksim in months.

No, OK’s source claims that Meryl is getting a little jealous over Maksim’s relationship with his ex-girlfriend, and she got extremely angry when she found pictures of Kate blowing kisses on Maksim’s phone.

The report goes on to add that Maksim is developing a reputation as somewhat of a player, what with his laundry list of ex-girlfriends, and his ability to juggle multiple women at the same time. Ah, who knew that being a professional dancer on a reality show would have such benefits?

It’s even funnier when the source adds, “Meryl was hoping what they shared was real. But Maks is known as a ladies’ man.” Well, Maksim and Meryl are both trying to avoid confirming their relationship in public, so maybe this is why? Perhaps Meryl always knew that Maksim wasn’t to be trusted, and maybe Maksim just never wanted to date Meryl – only use their fauxmance to finally win the big prize on DWTS. Either way, they’ve at least gotten a trophy out of their relationship, so a win-win?

Truthfully, I just don’t see Maksim and Kate ever getting back together, so I’m not really sure why Meryl would get so upset. Also, if Meryl did find pictures on Maksim’s phone, it’s probably from when they were dating – which is still creepy, but much less creepy. Regardless, this entire issue is based on the assumption that Maksim and Meryl are really dating, not pretend-dating for PR purposes.