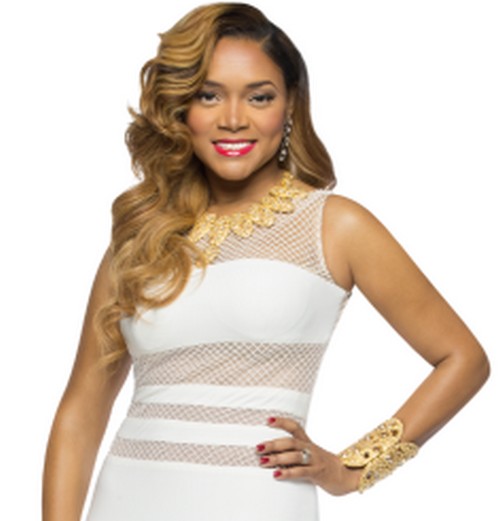 The second season of Bravo’s Married to Medicine started only about one month ago, but the drama is already in full force. A recent, heated confrontation at STK in Atlanta between Mariah Huq and Quadriyyah “Quad” Webb-Lunceford launched the two former best friends into the headlines, but for all the wrong reasons. The highly-publicized argument had media outlets theorizing about what happened that fateful night as the incident was not caught on camera. CDL, however, can tell you exactly what happened because we have the best witness of all…one of the two ladies at the center of the controversy, Mariah Huq!

We were fortunate enough to get Mariah to hit pause on her busy life for a moment so that we could talk to her exclusively about the incident at STK, her friends and foes on the show, her other projects, and her family life as well! You may know Mariah simply as the outspoken star from Married to Medicine, but there is much more to this multi-talented married mother of two.

We asked Mariah, a co-creator and co-producer of the show, how she came up with the idea for Married to Medicine and what made her decide to pitch her idea to Bravo. No stranger to the cameras, Mariah was once a television host at a local news station in Tennessee. She shares that it was her journalism background that proved most helpful in developing the idea, but the fact that she and her family “live, work and play” in the world of medicine, the concept was something very natural and something she and her husband, emergency physician Aydin Huq, felt was relevant and interesting.

Given that her life seems to revolve around her husband’s profession, it only makes sense that her inner circle and best friends are equally entrenched in the field. In fact, Mariah shares that she carefully selected the first season cast who she says were “all my friends,” chosen based on who she believed would be “the most entertaining, as well as attractive.” The second season brought on a couple new faces that were new to Mariah. “I didn’t know Lisa at all,” shared Mariah. We wanted to explore these friendships a little deeper, so we asked Mariah whether or not her friends have changed since joining the show and how that has impacted the friendships she had with each of them prior to joining the cast of the Bravo hit.  Mariah tells us, “Friends change. It’s really tough to see your friends acting differently. I have a whole new respect for people on tv because there is so much people don’t see. So I understand that, but the worst part is when [your friends] change and you don’t even recognize them anymore.” And an unrecognizable friend is exactly how Mariah might describe former BFF Quad. “We were friends for years.” We asked what happened to destroy what seemed to be an indestructible coupling. While many media outlets reported that the rift came shortly after Mariah made a comment during a confessional that made Quad highly upset, “What are we going to do with Ms. Quad?” Apparently, those were fighting words because the two have been at each other’s throats ever since. Mariah has another theory, however, noting that she cannot imagine Quad getting so upset about what she said. Mariah believes it was Quad’s struggle to fit in that contributed to her troubles on the show. “I brought her into this circle of friends and initially none of them liked her. The cast did not like her, and many referred to her as a “puppet” or pet project. I think she felt inferior and ended up taking it out on me.”

It was interesting because there was a hint of possible sadness in her voice when talking about her former friend. After detecting a soft tone when she spoke of Quad, we asked if there is a chance of reconciliation with the woman she used to call her best friend. “I think at some point we’ll be able to be cordial, but we won’t ever be best friends anymore. Based on the things she’s said…slandering my name, and the way she was talking to my mom—it leads me to believe she must have been harboring these feelings for a long time.”

Naturally, we had to ask for the details about the “night gone wrong” at STK. Mariah didn’t want to talk too much about the night because she feels it’s already been blown out of proportion in a very big way. “I think people are making a bigger deal out if it than it actually was.” She shares that the trouble began shortly after Quad asked her to come to STK to talk. When Mariah arrived, she was greeted by about 20 of Quad’s friends. Mariah came to Quad’s table, but Quad had stepped away briefly. During her absence, one of her friends was very disrespectful towards Mariah. Mariah confronted Quad’s friend about it just as Quad was making her way back to the table. Upon seeing Mariah going off on her friend, she assumed Mariah was the instigator. What she didn’t see was what happened that led Mariah to the point she felt she needed to defend herself. While some reports do confirm that there was an issue between Mariah and one of Quad’s friends, they don’t share the fact that Quad reportedly walked away briefly, nor did anyone comment on what was said between Mariah and the friend. The night ended with Quad accusing Mariah of being jealous because she has more fans, however Mariah counters, “That is absurd. I provided the platform for her to be famous.” And that is not all talk. Mariah owns the successful Mariah Media Group and is a co-producer of the show.

With so many frenemies, it must be impossible to know who to trust. Case in point, text messages from an associate of Mariah’s were leaked and portrayed her in a very bad light. Mariah is quite clear that  this was done in an effort for him to get his name in the media, knowing the story was gaining a great deal of attention. There must be some friends that are true and trustworthy in Mariah circle, so we asked her who she feels she is closest to, can trust the most, and who she thinks she will remain friends with through the thick and thin. Sweetly, Mariah responded, “Aydin and my mom!” It was obvious she genuinely thinks of those two as her best friends and biggest supporters. In looking at only the ladies from the show, Mariah added that Dr. Simone is the friend that most meets the criteria. Their friendship began upon Dr. Simone delivering Mariah first child and they have been close ever since. “We have a great deal of respect for one another,” shares Mariah. Mariah also appreciates the open communication they have.

With all the drama from the show, we were happy to hear that Mariah carves out time for her husband and children to enjoy doing their favorite activities. Mother to Lauren, 8, and Ethan, 6, Mariah enjoys traveling with her husband and little ones and shares that travel is surely their favorite activity. Some of Mariah’s favorite spots are Dubai, Abu Dhabi, and Thailand. Bangladesh is always a stop on their travels as Mariah’s family’s foundation has been working the past few to years to build a hospital/clinic in the country, and will soon see their hard work come to fruition as the work nears completion. Mariah and her hubby are also movie buffs and love to enjoy movies together. But it is not all play for the couple as they have developed the Cinnamon Girl Diet for women’s weight loss. If that wasn’t enough, mogul Mariah is making a name for Mariah Media Group and will be producing even more television shows including one close to her heart that has a multicultural foundation and follows a Persian family who own a business in Atlanta. Does this woman sleep?! Blink and you’ll miss this fast-paced wonder woman….so be sure to keep tabs on her at her website.

And don’t forget to watch “Married to Medicine” this Sunday at 9:30pm ET/PT on Bravo!