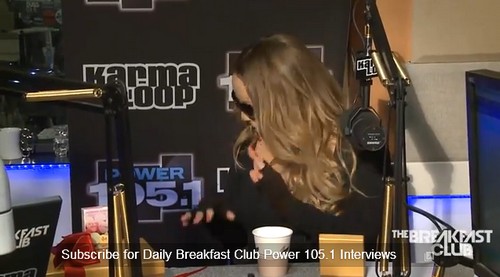 Mariah Carey’s latest interview sit down with The Breakfast Club on Power 105 has left CDL wondering when she will file for divorce. Her new song “You’re Mine (Eternal)” was released just in time for Valentine’s Day and finds Mariah singing about holding on to her true love with lyrics like “I can’t seem to give you up you’re mine.” Naturally, one would assume that the lyrics are an ode to her hubby of almost six years Nick Cannon. Well be careful with that assumption, because Mariah’s candid commentary on the popular radio show hints that there is definitely a storm brewing in paradise for the two love birds.

To be clear, Mariah came prepared to sit down for her interview today. Not only did she bring her own personal lighting director to ensure that the video tape of the interview would best reveal her beauty, but she also brought champagne to ensure that her words would best reveal her true meaning. (You know the saying; a drunk heart speaks a sober mind.) Miss Mariah was quite upfront and honest, about everything. From throwing shade at other artists in the industry and serving all the tea about how she compulsively fires dem babies’ nannies, Mariah did not disappoint.

Unless you believe in true love and want to see her and Nick together forever; in that case she may have disappointed you. Charlamagne Tha God inquired as to what plans Mariah and her husband Nick had for Valentine’s Day asking, “What does Mariah expect for Valentine’s? What does Nick have to do for you?” Mariah’s response was, “He’s not even going to be at home, from what I hear now.” Pause. You have to understand that it wasn’t just what she said, but HOW she said it. Very nonchalantly as she sipped champagne from her Styrofoam coffee cup. It was pretty clear, that she was being dismissive.

Charlamagne didn’t let it slide either. He fired right back, “From what you hear? Isn’t that your husband?” Mimi is not one to be emasculated, and quickly emancipated her self by shooing off any further inquiry into the matter by saying, “Oh no. It’s the schedule. The Schedule darling.” This she said as she tossed her hair over one shoulder. So to be fair, maybe Mariah was just saying that because both her and Nick are so busy with their careers that their schedules often conflict. This wouldn’t be too difficult to grasp, as both are super successful in their own right. Yet it was her demeanor that was telling.

The rumors of Nick and Mariah’s marriage being on the rocks have run rampant for some time now. A lot of things have come up to indicate that the two are indeed headed to Hollywood divorce court. You know what I always say, where there is smoke there is fire. (Or at least that smoldering cigarette) It would seem that this would be the case here. Mariah’s tone and body language definitely set off my spider senses that she could care less about where Nick Cannon is. In fact when Charlamagne asked her why people call Nick “Nick Carey” she said “I don’t listen to what people say.” Charlamagne followed with “You don’t listen to what Nick says?” Mariah mumbled, “I don’t care what Nick says.” Womp. There you have it folks. It seems these two are on the road to splitsville. If the dirt can be lifted out of this load, please help by washing it out with your comments.