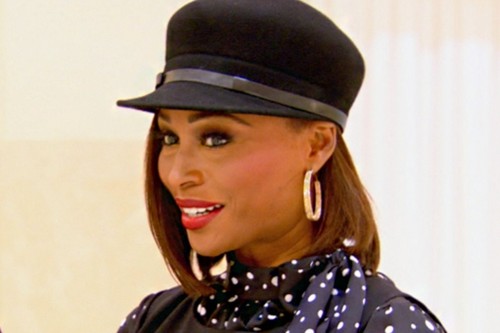 Tonight on Bravo, Married to Medicine returns with an all new episode called, “Blind Date.” On tonight’s episode, Simone plots to revive her love life with Jackie’s help. Elsewhere, a business venture leads to a fiery dispute between Quad and her husband, and an unforeseen financial problem plagues Toya and Eugene.

On last week’s episode Quad and Reco scrambled to finish their puppy couture samples before their investor meeting, but Mariah filed a restraining order against Reco that threatened their progress. Lisa Nicole threw a fantastical princess party for her daughter, but tempers flared as Simone disinvited Mariah from the couple’s trip.  Did you watch last week’s episode?  If you missed it we have a full and detailed recap, right here for you.

On tonight’s episode Simone enlists Jackie’s help in a scheme to resuscitate her flatlining love life. While Simone springs a romantic surprise on Cecil, Jackie’s babysitting skills are pushed to the limit when Simone’s kids wreak havoc on the house. Meanwhile, Quad’s business venture leads to a heated argument with her husband that threatens their relationship. Toya and Eugene encounter an unexpected financial problem.

Tonight’s episode begins with Dr. Heavenly and daughter Alaura talking about the party. Laura calls Heavenly out for raising her voice and talks about how she thought Mariah’s entrance was over the top. Heavenly thinks she is wise beyond her years.

Simone talks with Jackie, seeking advice on revamping her sex life. Jackie agrees to watch the boys so Simone can put an effort in to getting things back on track with Cecil and hopefully allowing the night to end back in the bed!

Quad gives a presentation to some big-time investors. She is excitedly sharing her line, and wonders why the men are not as excited about the ostrich feathers as she is. They ask what they have for simply taking the dog for a walk. She shares some of her more casual items. They seem to come around a bit until she asks for their financial support for the fashion show she wants to hold. Her goal is to get her couture dog fashion line in Neiman Marcus and the like and asks the men for $30,000 for her fashion show. Did she think this through? Not sure how she can possibly need 30k for her invite-only fashion show, but she will not budge on the number when the investors counter with $25,000. Even that seems pretty steep, but she wouldn’t take the offer.

Quad is going for $30,000 and that is all she’ll accept, it seems. BUT…these are some smart investors. They tell her they will give her $15,000 up front, but will be doing a site visit soon and want to see where she is at with the planning. They want to see the venue, the guest list, etc. If she has it together and earns their confidence, she will get the next check. Quad is pretty confident she’ll get her second installment.

Toya and Eugene get some really bad news. Still dealing with the home/bank/real estate issues, they learn that they will either have to come up with the extra $10,000, or they will lose the $50,000 deposit. They have been dealing with this issue for a while and had hoped after meeting with the attorney, they’d find out they wouldn’t lose their deposit. She meets the couple for lunch and explains that she went over the contract in detail and confirms that they’ll need to come up with the extra $10,000 or lose the $50,000. Toya cannot even think of food, but Eugene digs in, prompting Toya to wonder what is wrong with him because she is far too stressed to eat!

Lisa Nicole is planning a fashion show with some of the hottest models. She has some long time casting directors on hand to help her select the models she’ll use from those who were pre-selected. They are let down as they see model after model who just doesn’t have what it takes….many not even close! Labeling one a football player and giggling about how another walks, they are hoping to get some true models soon. They finally find some good models to represent the Lisa Nicole Collection.

Dr. Simone tells her boys she needs their help to pull off the secret date with their dad. She tells them her idea, and asks them to rush Cecil to the golf course so he can be there in time for the secret dinner. She tells them that Dr. Jackie will be watching them for the night.

Toya is still reeling from the loss of the $50,000, but still does her mom duties and brings the boys to school with a smile on her face. After she leaves school, she calls Eugene to tell him some good news. Another mom at the school told her her NBA hubby got traded and they need to move right away. Toya does a drive-by and LOVES the house…from what she can tell from behind the gate. She thinks she found the solution to their home problem. Meanwhile, Simone is at the golf course getting the table set for her special dinner date.

Back at home, Quad argues with her husband over her pampering of the dogs. He obviously has some issues that have been bothering him, because he lets it all out. He goes on about the fact that most people don’t have the time to go out buying their dogs frou-frou outfits, because they are too busy making a living, or making ends meet. He tries to bring her back to her roots and remind her where she came from and he seems pretty upset by the way she has changed and questions what she is giving back to society. Later, Quad is upset that Gregory is dismissing her dreams as he just doesn’t get what she is doing and is laughing through her pitch.

Cecil arrives at the golf course and Jackie is waiting to blindfold him and lead him to his special date with Simone. Jackie takes off with the boys and leaves the two alone to enjoy their night. Jackie gets them home and struggles when the boys say they are hungry. She doesn’t keep much food in the house so she offers them the few things she has. The only thing the boys seemed to agree to was popcorn. Jackie is counting the minutes until mom and dad come to pick the boys up!

Simone asks Cecil for suggestions about how to get their marriage back on track. Cecil tells her that while he understands her need to chart, it shouldn’t be every day and every night because he wants more time with her. Simone agrees with him and knows he is right, and agrees to make some changes.

Another eruption next week and it happens during the couple’s trip. See you here next week for more of the juicy drama from M2M!