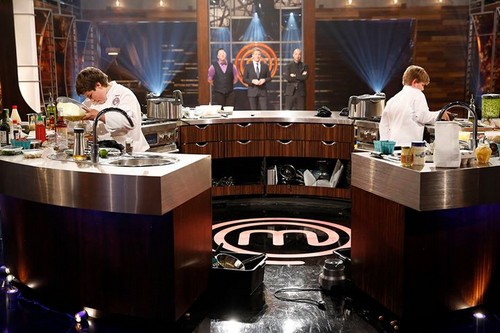 Tonight on FOX Gordon Ramsay’s Masterchef Junior continues with a new Tuesday December 16, season 2 finale called “The Finale,” and we have your weekly recap below. Tonight, the Season 2 finale 11-year-old Logan Guleff and 12-year-old Samuel Stromberg go head to head and a season 2 winner is crowned. The winner will receive a trophy and a $100,000 prize, after the Top 2 junior chefs prepare a three-course menu in the last challenge.

On the last episode, the Top Four junior home cooks were tasked with breaking down an exquisite Alaskan King salmon and cutting as many perfect filets as possible. The winner of the challenge got an advantage in the next round, when the contestants will had a limited number of ingredients to prepare a restaurant-quality salmon dish using the filets from the previous challenge. The two contestants with the most impressive dishes earned a coveted spot. Did you watch the last episode? If you missed it, we have a full and detailed recap right here for you.

On tonight’s episode as per the Fox synopsis, “In the exciting season finale, the two finalists will compete head-to-head and prepare the most important three-course menu of their lives. Find out which talented junior home cook will earn the MASTERCHEF trophy and a $100,000 prize.”

Don’t forget to join us for our live recap tonight at 8:00pm when MasterChef Junior Season 2 Finale episode airs on Fox. While you wait for the recap, let us know how your enjoying this season of MasterChef.

It’s time for the finals of #MasterChefJunior. It’s Logan versus Samuel. The judges welcome us to see whether the 11 or 12 year old will win this year’s finale. Samuel comes in first in his little chef jacket. So cute. Next is Logan also looking a real little chef. Gordon congratulate them for making it to the finals. Many of the other kids are back, along with their parents, to cheer them on. And both Logan and Samuel’s family and friends are there.

Samuel’s mom Lisa said he make a perfect ratatouille after he saw the movie. His dad says he’s so proud of him. Logan’s mom tells him to work hard and don’t go rogue. They have to cook appetizer, entree and dessert for their finale challenge. They have a full pantry to choose from and get 10 minutes to gather their ingredients.

Samuel, as usual, is making extremely complicated dishes and is going for highly technical. Logan also plans highly technical dishes for his #MCJFinale foods. They are both planning on using liquid nitrogen, so this should be interesting. They have 90 minutes to complete all three. Gordon starts the clock, the onlookers cheer. The other kid chefs discuss who they think will win it and they’re split.

Samuel is going for South East asian flavors but a French flare. Logan has dozens of ingredients at his station that it’s crazy. Lisa, Samuel’s mom, says by the time he was eight he had taken over the kitchen. Kim, Logan’s mom, says he doesn’t even watch cooking shows, he just seems to know which foods go together. The judges then talk about how neither is playing safe tonight.

Graham says Samuel’s menu is very technical. Joe says Logan is going Euro-centric. They discuss that his prawns are very risky. He’s also making branzino which can be a real challenge. Gordon goes to talk to Samuel who is very busy. He tells Gordon he’s making chicken oysters that he will fry and toss in a sesame glaze. He’s also doing Arctic char.

Joe goes to talk to Logan and cautions him not to overcook his prawns. He talks to Graham about salt crusting his branzino. Joe says that’s very difficult but Logan says he wants to impress them. He also says he’s making lemon Madelines with goat cheese mousse. The judges talk and Gordon says Logan could win if his food is cooked properly.

Joe thinks Samuel’s menu is more likely to win. They seem to be torn on who’s going to win. Logan pulls out a smoking gun and starts doing a really technical technique. The crowd is wild for this. Samuel pulls out his liquid nitrogen to quickly freeze and smash his raspberries. Mitchell says the two of them are like watching mad scientists work. Graham says this is the future of food.

He says the dishes all look stunning. They are asked to carefully bring their dishes down to the front. Logan is feeling confident and Samuel is too. Gordon says they are going into the MasterChef restaurant to see who will be crowned. They start with the apps. Samuel goes first and says it’s chicken oysters with pickled cucumber and spicy crisp rice. Gordon says it’s visually stunning.

Logan brings up his grilled spot prawns with smokes saffron aioli. Gordon says the spot prawns are cooked beautifully and says the smoked aioli is nice and shows flair. Graham says his only criticism is the olives which he thinks are a little strong. Joe then tastes and says he likes the olives and says it’s brilliant. He says the dish hits on every level.Next they bring in their entrees. Samuel says he thinks the smoke gun was just a gimmick. Sour grapes, anyone? He judges talk about how well Logan cooked the prawns and romaine and says they’re off to a great start. The boys come back in with their entrees and Samuel is a little worried about his Arctic charr. Samuel brings his up first.

It’s a seared Arctic charr with a saffron curry. He pours the sauce onto the fish table side. Samuel describes the cook they should see on the fish. Joe cuts in and says he nailed the cook on the charr. Joe says he likes the concept of pairing Southeast Asia with the Arctic. He tastes and says the seasoning is good on the fish and it has amazing fusion.

Graham tastes next and says the fish could stand on its own but with the curry and coconut milk it’s heavy and doesn’t let the fish come out. He says the seasoning is a bit heavy. Gordon tastes and says the cook is like a dream and the noodles were good but could use a little more spice. Gordon says professional chefs can’t cook that fish and tells him well done.

Logan comes up with his salt baked branzino stuffed with roasted baby vegetables. Joe says this is one of the most unusual entrees they’ve seen. They ask him why the risk and he says – go big or go home. Gordon says there is a real risk to see if it’s overdone. He says he can’t wait to cut into the crust and see if he was bold or reckless.

Joe cuts into the fish and says the salts help keep the fish moist. He says in this case it’s not a seasoning but is an environment to cook it in. Joe cuts and plates the best pieces then tastes. He says it’s awesome and that Logan nailed it. He says it’s moist but the sauce is a little aggressive. He says it’s amazing. Graham tastes next and says the veggie choice is perfect.

He says the salt crust worked beautifully and likes that he tried something new and says his risk paid off. Gordon tastes and says the fish is delicious. Gordon says the sauce was a little over the top and would have done better with a butter sauce. He says both Samuel and Logan chose the wrong sauce for their fish. Gordon says those were amazing fish dishes.

Graham says he would go back for more of Samuel’s but Gordon says he liked Logan’s better and thinks he has a slight edge. Next up is desserts. The boys bring theirs in. Samuel goes first and says he made a kaffir lime panna cotta with passion fruit and raspberry. Graham tastes first and says it’s like getting punched in the mouth in the best possible way. He says it’s killer.

Gordon is next and says the panna cotta is delicious and says it has a lovely fragrance. Gordon says he just wants more of it. Joe goes last and says he thinks the anise crazy brilliant and sophisticated. He tells him good job. Logan says he made meyer lemon Madeleines with goat cheese mousse and berry compote. Graham asks about the goat cheese and Logan explains it.

They agree his fish was cooked well but Joe says he missed the boat a bit on the curry. Gordon says the dessert was amazing. They agree that it’s a very difficult decision. The judges come to a decision and all concur. They head out to announce the results. Samuel is 100% sure he’s won it while Logan says this is a nail-biter.

Samuel and Logan await their fate with their family and friends standing close by. The other kid chefs are down there with them too. Graham says they’re both sixth graders, one from Tennessee, one from California. Gordon says they have both been incredible but only one can win it all. One gets a check for $100,000 and gets the MasterChef junior trophy.

The two boys stand up front in front of everyone and Gordon announces the winner is Logan. Confetti goes everywhere and Logan breaks into a huge smile. The judges come to hug and congratulate them both. Logan’s parents hug him and his dad says it’s crazy. Logan says it’s surreal and is amazing and life-changing. He says this is one of the best days of his life.

Gordon tells Samuel he should hold his head up high because he’s application. Logan says Samuel is a great chef and put up a great fight. Logan gets the money and the trophy but says it’s not about either of those, it’s about the food.