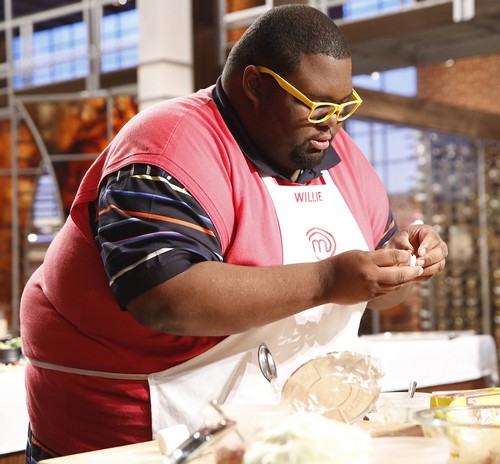 On the last episode, in the last cooking challenge, the remaining home cooks were split into four teams of two and prepared a poultry dish, each using different parts of the chicken. The two pairs who most successfully completed their dishes were safe from elimination, while the two losing pairs had to face a series of pressure tests with eggs. In each of the three pressure tests, one competing home cook moved on in the competition.  In the end, Daniel was sent home, a salty souffle did him in. Did you watch the last episode? If you missed it we have a full and detailed recap, right here for you.

On tonight’s episode, before the next mystery box challenge, the remaining home cooks will receive a little hometown encouragement, as they head into a savory apple dish challenge. The home cook who creates the best dish, not only will be safe from elimination, but will also play a key role in the next challenge. Then, the remaining home cooks will be split into pairs as they prepare a variety of pot stickers.

The judges head into the kitchen then the top seven come in for their mystery box challenge. Gordon says they each have a reminder of why they are there. Willie has a handful of letters and some have just one. Elizabeth has a letter for her hubby, Courtney from her mom. Cutter has a letter from his dad and Leslie from his kids. Willie says it’s the boost he needed to win.

Joe tells them it’s time to see what’s under the boxes. They pull up their boxes and fruit goes tumbling everywhere. It’s a ton of apples. They have 60 minutes to make a stunning apple dish. Gordon says to prove how far they’ve come. But it’s a #NoDessert challenge. That stuns everyone. Courtney grabs an air fryer.

They are peeling, grating and running around. Gordon says they were excited for a second and the judges talk about how apples as a savory dish offers them a chance to shine. Willie is making pork chops with apple stuffed mushrooms. Yum. Cutter is making apple stuffed squab with apple chips. Both side yummy.

Courtney is plotting an apple, cheese and pork dish using the peel of a Granny Smith apple. Elizabeth is making hand pies with pork and apple and Graham and Joe wonder what a hand pie is. They wish her luck but it doesn’t sound too sincere. Leslie is also doing pork with cheese, apple and bacon. He talks about his wonderful wife and their seven kids. Gordon calls him Mr Viagra.

Christian is also doing pork and is mixing red apples in with his veg. Gordon says all the dishes smell and look incredible. They discuss that Leslie is in the zone. They think Christian’s looks awesome but wonder about the hand pie. The home cooks slave away in their last minute and struggle to get their plating down. It’s the count down from 10 then hands off to see who wins and gets the advantage.

The judges go poke around for one last look before they choose the top three. Christian’s looks great but Gordon wonders if it’s cooked in the middle. He cuts in and says it looks moist and he nailed it. It has some cinnamon and Cajun seasoning inside it. He likes it. Graham tastes and likes it and so does Joe after telling him he had almost written him off.

Graham calls down Leslie to present his dish. Willie says his dishes look amazing and he could win. He did a bacon wrapped stuffed pork tenderloin. Graham says it’s perfectly seasoned and balanced on a little mash with a little apple in it. He says it shows a lot of technique. Gordon says the letter from his wife put a spark up his ass. He likes it too.

Joe calls down the final dish – it’s Courtney. She presents her dish and Elizabeth says it makes her want to stab kittens. She did a stuffed loin as well with pink lady apple juice. She used apple in every component. Joe says wow and tells her it’s a smart dish. He says she gets better and better. Graham says it’s good technique and it’s her at her best.

judges take her back to the pantry to show her the elimination test. They tell her it will be different tonight. She will not choose what they will cook but another important decision. They are all cooking dim sum. They are doing dumplings, buns, cabbage rolls and pot stickers.

Courtney pairs Christian with Willie. Willie is happy – that’s who he wanted. Christian isn’t so happy. Courtney puts Cutter with Elizabeth who she says can help him with the intricacies. This leaves Leslie with Jaimee. Leslie says he’s happy with it. They will take turns cooking and then when the judges shout they have to change. They get to taste the dim sum before they have to start cooking.

Joe tells them at least one person is going home today but maybe a whole team. They have 60 minute and begin to scramble. Joe says some of them may have never had dim sum much less know how to cook it. They discuss that the short ribs and cabbage need to get started right away and that communication will be key. Leslie won’t listen to Jaimee right away.

Jaimee yells at him to turn the burners on and finish the prep work but he’s messing with unnecessary stuff. She has to finish what he should have already done and he is confused on the ingredients. Jaimee yells up thanks to Courtney. Gordon thinks she’s given up. Cutter and Elizabeth seem to be doing okay. They call for a switch again. Christian is trying to push Willie to move faster.

The judges come out to check on them. Elizabeth has Cutter running around as she yells orders. Leslie doesn’t want to listen and tells Jaimee to stop talking. Joe is aggravated on her behalf. It’s almost time to swap and Christian is complaining that Willie is using too much egg wash. Gordon says Willie is lost and Willie doesn’t like being yelled at like Christian is doing.

They swap again. Willie tells Gordon he’s not feeling well. He’s stressing out and he tells him to sit and have some water. Courtney feels bad for Willie and says the challenge is too far out of his comfort zone. Cutter has the pot stickers done and they’re doing well. They have a plan. Leslie is yelling at Jaimee and Courtney laughs. Leslie says they’re fine as Gordon asks. They have 10 seconds to swap.

Jaimee is trying to give Leslie some advice and the judges wonder if the two of them will even get any food on the plate. They also talk about Cutter’s big finger trying to roll dumplings. Willie has his composure back and Jaimee says they won’t have the steamed buns done. Leslie tells her to chill. It’s time for the final swap.

Leslie finally starts giving Jaimee positive reinforcement. Elizabeth slips, falls and springs back up. They rush to get the lids on as the judges yell and count down. It’s hands in the air and they’re done. Gordon says six entered the challenge and at least one will go home. He starts with Jaimee and Leslie. Courtney says the whole thing looked like a disaster.

Gordon says it was pandemonium. He says the dishes look good despite the animosity. He tastes and says the short ribs are delish and the pot stickers taste nice. He says it would have been near perfect if they had gotten along better. Joe unrolls a cabbage roll to taste and says good job. He says he was expecting discord but it was harmonious and had good flavors.

Christian and Big Willie are next up. Graham says he was inspired watching them yet the dishes have no finesse. Christian says he burned a pot sticker and Graham says the dough is too thick. He says they are like rubber balls instead of steamed. He says it’s sad. Gordon tries the cabbage then spits it out. It’s bland and asks them if they’re serious about winning. Gordon says neither deserves to be there based on this performance.

Elizabeth and Cutter bring their dishes down and she’s dreading it – she says it’s her worst performance. Gordon says it looks horrendous. He says it looks like a basket of canned dog food. He says it’s clumsy and oversized. He says the pot stickers are under-filled, there’s too much cabbage, sloppy pork. Leslie says he’s loving this and Jaimee giggles. Gordon asks how communication that good could make food that bad. Joe tells them it’s disappointing. He says he doesn’t even want to eat it.

Joe says Courtney hit a direct strike like they haven’t seen before. Courtney smiles. Elizabeth is very upset at herself and at Courtney’s strategy.

Gordon tells them all it was a tough challenge. He says the winning team against all odds was Jaimee and Leslie. They hug it out as most of the others applaud. They head upstairs with Courtney. Leslie tells her thank you. Gordon tells Elizabeth and Cutter they looked like they had it together but then it lacked finesse. He says Willie and Christian were fragmented and Willie was even in tears.

Gordon tells them that the team that’s safe by just a fraction of a hair is Cutter and Elizabeth. SO that means either Willie and Christian are going home. They talk about their differences and say it’s a difficult decision. They announce that Willie is going home. Aww. I loved Big Willie. Not cool. He and Christian hug. Gordon tells Willie he always put love on the plate.

Graham says he has a natural ability and belongs in the kitchen. He comes up and the judges hug him. Joe wishes him luck. They all get nice big Big Willie hugs. He says he thinks that Christian is going to win it. Although earlier he said he thought Leslie would win. We’ll see.