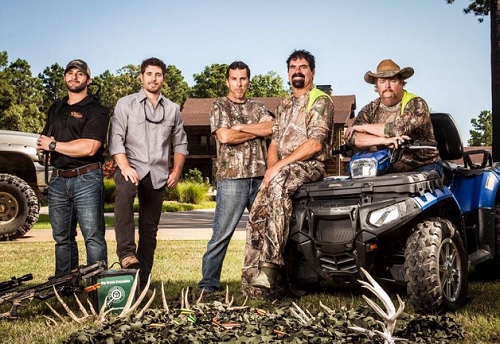 A&E has hit a homerun with new series Country Buck$, and CDL caught show star Matt Busbice just as he was leaving the woods after being camped out for one month straight! Happy-go-lucky Matt was heading into the city as he told us all about his brand new series.

Country Bucks stars the Busbice family, founders of Wildgame Innovations, and follows this fun crew as they create high-tech hunting products with the help and support of good friends. One of the family’s close friends is none other than Duck Dynasty boss Willie Robertson, who often visits the Busbice family on their 55,000-acre ranch in Louisiana — the location where they hunt and test all of their products. Hunky Matt is the mastermind behind the marketing for the company he owns with his family members including older brother Ryan, dad Bill, mom Beth, uncle “Hard Luck”, and friend and family ranch manager T-Carr.

We asked Matt what he liked most and least about working with his family. Matt tells us, “In these busy times, it’s hard for everybody to schedule family time, so it’s a great thing to be forced to spend family time together, actual physical time. So, it is a blessing to work together.” Matt says the most challenging thing about working with family and running a family-owned business is that the long hours call for a lot of spillover between work and home, so “it can be hard finding balance between work and family and time off.” Good thing he has a fun-loving family around him to keep things entertaining. Matt’s uncle provides a few laughs and fodder for eye rolls with some of his outlandish product ideas.

Between his product ideas, Sack Attack and Zipline Blinds, Uncle Hard Luck tries and tries to come up with the next big idea, but usually fails miserably. Matt tells us, “I have to let it be known that we have never launched a product that he’s come up with.” But, there is hope. Matt says he feels sorry about that and is still hopeful that Uncle Hard Luck will one day be able to have his day. Matt shares that Uncle Hard Luck has had ‘hard luck’ for years, “He has had the worst luck since I can remember.” He may be the victim of hard luck, but he provides some great entertainment for the show!

Matt and Ryan may be brothers and may work very closely together, but Matt dishes that that does not mean they are always on the same page. “My brother and I are opposites,” he shares, noting that this can be difficult when talking about their relationship as business partners. Matt tells us, “Ryan says I have never contributed anything good to the company,” sharing that Ryan thinks he’s spending more money than his marketing ideas bring in. Matt pushed Ryan to do the reality show in hopes of helping to build the family brand, and of course for bragging rights. Matt talked Ryan into doing the show so that if the business grew, it would be undeniable that within his 15 years with the company he contributed to that growth. Kind of makes us want to go buy something just to help him out!

We asked Matt what he likes to do in the little down time he has. Matt laughs, “If I say flyfishing, I think that may seem cliché, but it’s true—that is my true escape. I also go to my ranch near Jackson, Wyoming,” where the bachelor retreats to take a break. He laughs, “I enjoy chasing deer and women.” Hard to believe but Matt says he has still not found “the one,” and worries he won’t be able to “trick a mature girl into going on a date with him.” We can’t see him having a hard time finding a nice lady, but his sister may feel otherwise. Matt tells us she’s been on the hunt for a wife for Matt for years, even pushing a stint on The Bachelor. We see a Matt spin-off in the future where he finds the perfect love. What do you think? One thing is for sure, his leading lady will have to enjoy the outdoors, hunting, and camping for extended periods.

We know why women may want to see more Matt, but we asked him what will make viewers want to tune in to Country Bucks. Matt tells us the show is, “funny, positive, [void of] toilet humor, and it actually shows a real family trying to make it in an industry and field they love. The American dream is real. We loved to hunt and carved a living out of it. It is happening and it is real. We are proof that if we can do it, anyone can do it.” We love his positive attitude. Sounds like this Country Buck sees the glass as half-full!

Be sure to tune in to Country Bucks on A&E Wednesday nights at 10PM. Check out A&E’s website for more information on the cast and show. Don’t forget to follow Matt on Twitter, and Like him on Facebook to get all the latest on his adventures and the show.