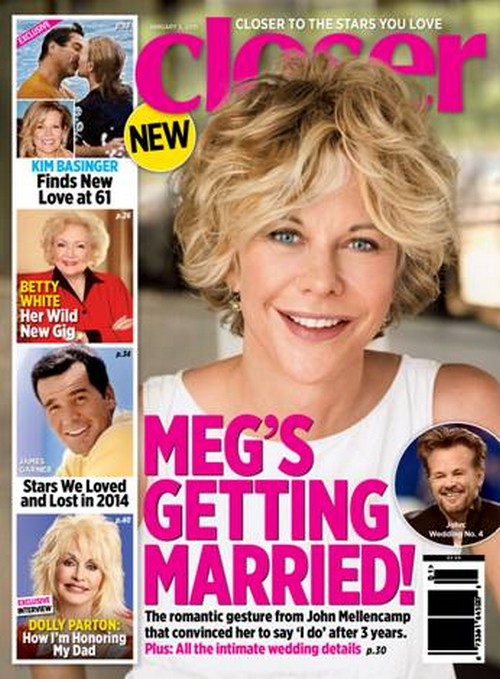 Meg Ryan is getting married, y’all! How anyone is willing to marry her when she’s wearing the crypt keeper’s face, I’ll never know. However, an exclusive new report from Closer Weekly states that Meg Ryan and her longtime boyfriend John ‘Cougar’ Mellencamp are getting married.

A source tells Closer Magazine, “John has a big romantic streak. He will come up with something to sweep her off her feet. He loves grand, romantic gestures.” In fact, there were rumors that Meg’s relationship with John Mellencamp was on the fritz because he was unwilling to move to New York, but now that he’s finally willing to take that step, their relationship is clearly ready to move to the next level. In fact, several sources close to John and Meg have admitted that they are planning to get back together, and after years of sustaining a long term relationship, it’s about time that one of them took the marriage plunge.

Apparently, John is taking two weeks off in April, and friends predict that he will propose marriage to Meg during that time. These same friends predict that John and Meg will likely get married before the end of 2015, since they’ve been together for so long already and there’s no use in having a prolonged engagement. They’re not young anymore, and nothing proves that more than Meg’s face.

Granted, Meg Ryan also has a daughter, Daisy True, who she tried to hide from the paparazzi and media whenever she can. However, some trusty observers [courtesy of Diva Gals Daily] reported that they saw Meg and Daisy at the Savannah International Airport in Georgia, adding, “Meg looked gorgeous in a long black coat and sunglasses. She had no bodyguards or entourage – she was just with family and friends and her driver.” It’s likely that Meg and Daisy were going to visit John Mellencamp to hear a proposal, especially since their engagement is all but set in stone.