Mel B Divorce: Stephen Belafonte Split Over Abuse, Mel B Moves Out 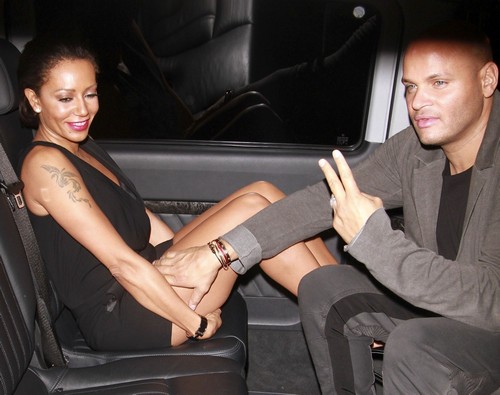 Mel B and her husband, Stephen Belafonte, have been married since 2007 but there have recently been rumors that the couple is facing a divorce. The Sun recently reported that Mel B and Stephen had been having big fights, something that Mel B even confirmed during interviews last year. But the Sun’s report does contain rather a big piece of information – that Stephen had been abusive to Mel B, and that was one of the biggest reasons that their marriage was breaking down.

The Sun’s sources have also confirmed that Mel B was moving out of her shared home with Stephen, and that things had reached a point of no return, the couple has split. Several boxes and luggage was removed from the home on Monday, December 15th, and sources added to US Weekly that the couple reportedly had a very ‘volatile’ relationship. And when US Weekly is writing about ‘volatile’ relationships, I think it’s safe to assume that volatile means both physical and emotionally volatile.

The biggest issue with this is that Mel B’s sister, Danielle Brown, created more drama when she tweeted about Mel B’s ‘mysterious’ illness [Mel B was supposedly sick with something last week], and then she claimed that she had records of abusive phone calls from Stephen to Mel. Danielle and her mother reportedly couldn’t contact Mel B, which they claim is why they freaked out and started threatening Stephen. But if Mel B really is moving her things out of their home, then perhaps there is truth to the rumors – Mel B wasn’t just sick, but she was in the midst of separating from Stephen. Of course, Mel B doesn’t really talk with her mom or her sister, so maybe it was just a case of excessive famewhoring on their part.

What do you guys think? Will Mel B and Stephen Belafonte divorce? Or is her split, moving her stuff out of their house, due to a temporary separation? Let us know your thoughts in the comments below.

Mel B and Stephen Belafonte