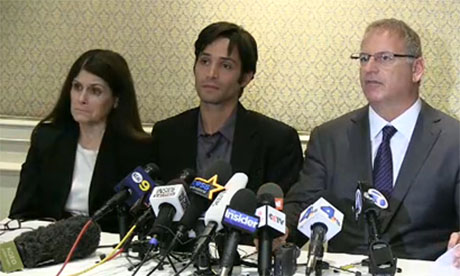 Michael Egan, the man who’s accused Bryan Singer of sexually abusing him when he was an underage teenager, has added three new names to his lawsuits alleging sexual assault. The three people named in the lawsuit are Hollywood big wigs by the names of Garth Ancier, David Neuman, and Gary Goddard. All of these individuals have a status similar to Bryan Singer, as most of them are highly regarded producers, either for television, movie, or stage productions.

According to the new lawsuits, Garth Ancier sexually abused Michael Egan numerous times when he was fifteen, and even moreso two years later during a trip to Hawaii. If you missed the recent news, Bryan Singer is currently denying his attendance in Hawaii during the time of this alleged assault and is currently preparing evidence that will supposedly prove he was not in the area during the time these alleged acts were committed.

Michael Egan and his lawyer, Jeff Herman, held a conference on Monday afternoon to outline the new allegations made in the recently filed lawsuits. Jeff opened the conference by saying individuals who’ve been victimized and exploited by the Hollywood “sex rings” should not be afraid to step forward and seek out justice, as there’s always something that can be done.

Sitting beside Michael at the press conference was his mother, who became quite emotional when it was her time to speak and detail her experiences with trying to find her son the justice he deserves.

As more news develops, we’ll be sure to inform you. What are your thoughts so far on this volatile case?

Note: The state of Hawaii allows victims of alleged sexual assault to file lawsuits — even long after the statute of limitations has passed.