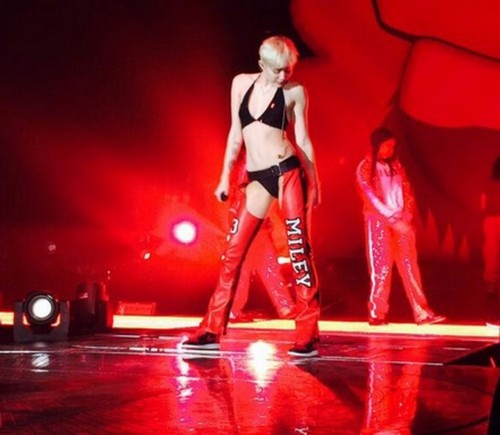 Pop’s most famous “dirrty” girls are in the midst of a bitter feud.  Miley Cyrus refuses to perform on The Voice because she hates Christina Aguilera. Voice producers have made several offers for Miley to perform on the show, but she always says no.

“Miley is no friend or supporter of Christina, despite the fact they have a lot in common, including long associations with Disney and using some of same people through the years on their respective business teams,” a source told Radar.

The rift between the two divas was apparently ignited by a Tweet. Miley wore a pair of chaps while performing onstage in February. Christina Aguilera made headlines back in 2002 when she wore chaps in the “Dirrty” music video and continued to wear them in live performances of the song.

“Cheers from one dirrty girl to the next @MileyCyrus…wear em’ loud & proud, girl-yes!” Christina wrote

Most likely meant as a compliment, Miley didn’t want it. “Miley couldn’t believe Xtina would Tweet about her wearing chaps on stage, reminding everyone that she did it first. It was such a fake compliment and undermined Miley in the process,” says the source

Although Shakira is sitting in Christina’s seat on this season of The Voice and Gwen Stefani will replace her next season, Miley has continued to turn down the offers. “The Voice is still Christina’s show and Miley doesn’t want to lift a finger to help that woman,” the source added. They even asked her to perform on the show’s finale last month.

I don’t believe there is a real feud between Miley and Christina. Miley is busy with her tour, having fun, and trying to stay healthy. And Christina has already reached legend status and is focusing on her baby. She doesn’t have the time feud with a 21-year-old. But what do you believe? Is this feud real and whose team are you one? Join the conversation and leave a comment.