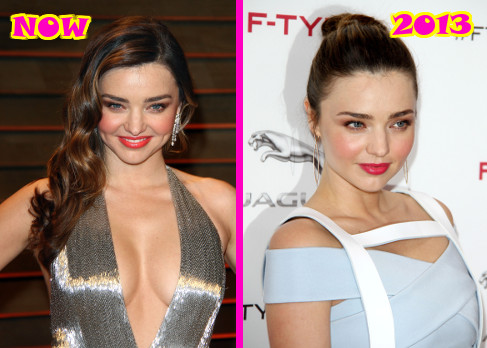 Has famous model Miranda Kerr had a boob job to give her a few more curvies? According to a top plastic surgeon, she most certainly has! Dr. Anthony Youn, who didn’t perform Kerr’s alleged augmentations, reveals that “Miranda appears to have undergone a very tasteful breast augmentation” and has “gone from an A (cup) to a small C (cup).” Past photos of Miranda often show her in dresses with heavy-covered tops. But it was a different story at this year’s Vanity Fair Oscars party, where she was seen flaunting her new chest in a revealing, glimmery dress.

In the above photo, you can see Kerr’s current appearance versus her several months ago in 2013. You be the judge. A friend close to her says that she’s had no work done, but countless doctors who’ve weighed in say she very likely underwent a breast augmentation procedure.

“In all of these pictures, the dresses are very similar in design and there is no boob except in the last picture which again is an open design without a bra,” Dr. Fred Pescatore tells Radar Online. “There is no way to go from nothing to something without an operation or weight gain which she hasn’t done.”

What do you think of Miranda’s new look?