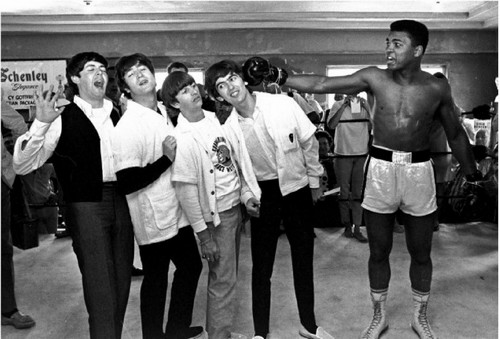 Boxing legend Muhammad Ali is apparently suffering from the late stages of Parkinson’s disease and has reportedly lost the ability to speak! It’s a sad, sad day for boxing fans and admirers of the cultural icon formerly known as Cassius Clay.

A source close to Ali revealed, “His health has been declining rapidly this past year.”

Another pal visited the boxing legend recently and said that he was shocked at Ali’s inability to put a sentence together. The friend recalled, “His lips quivered, but no words came out. It was like he had been struck dumb. At times his lips would twitch as he stared straight ahead. At times his head went limp and just hung there. It was all so, so sad.”

Another close friend said that Ali’s face appeared to be paralyzed during their fifteen minute visit. The pal revealed, “His eyes were fixed on me, but kind of unfocused. I saw fear in them for the first time. He was truly shattered, a shell, not able to utter a sound. I got the sense his face was paralyzed.”

The 72-year-old champ made his last public appearance to the Louisville, Kentucky home of 37-year-old terminable breast cancer sufferer Jill Conley. During his visit, he barely spoke and appeared to be quite frail. He was unable to walk or talk during the visit, but his spokesperson denied those reports. The family rep said, “He often communicates with family and friends. His speaking style is softer. He continues to speak by his courage, his love and his faith – and he does so with great clarity to those who are listening.”

It sounds as if those around him are refusing to see the truth despite it staring at them right in the face. While his rep says that he “communicates”, he doesn’t actually explain if he is able to be understood with his voice as opposed to communicating with a glance or via the written word.

Let’s hope that he can still float like a butterfly and sting like a bee – even though it’s not looking all that promising at this point.