BY Kristine Francis on May 21, 2014 | Comments: one comment
Related : Motive, Recap, Television 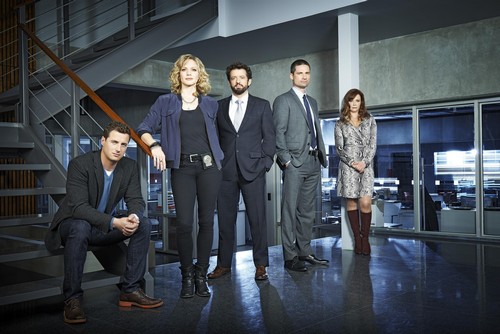 ABC tonight has MOTIVE ‘s second season premiere – the new crime drama continues with a new episode entitled, “Raw Deal.” On tonight’s show Angie and Vega investigate a possible suicide in the Season 2 premiere. Meanwhile, former undercover detective Mark Cross takes over as the Metro Police Department’s new commander, and it turns out he has a connection to Angie’s past.

Turning the tried-and-true crime drama formula on its head, both the killer and the victim are introduced at the start of each episode. As the mystery unfolds, winding between revealing flashbacks and present time, viewers will navigate the twisted and complicated maze of each murder, solving the puzzle alongside Homicide Detective Angie Flynn and her team, piecing together more of the mysterious connections that drove the Killer to commit murder.

On tonight’s episode Detectives Flynn and Vega investigate a suspected suicide victim who may have had some unwelcome help ending his life. Meanwhile, the Metro Police Department homicide team has a new Commander, Sergeant Mark Cross – a charismatic former undercover detective with a mysterious link to Angie’s past.

Tonight’s episode is going to be an exciting one that you won’t want to miss, so be sure to tune in for our live coverage ABC’s Motive tonight at 9 PM EST! While you wait for the recap, check out the sneak peek of tonight’s episode below!

Season 2 of Motive opens with a wedding proposal although, sadly, it’s not between favorite detectives Detectives Angie Flynn and Oscar Vega. As of now those two are remaining platonic. Meanwhile it’s the killer that recently found a very romantic way of proposing to his girlfriend of the past three years and yet it’s the same killer that went on to blatantly ruin any chance of happiness he could have had by murdering someone the world has already voted off as insignificant.

The killer’s name is Ian. He’s a photographer and appears to have his life well-glued together while the man he killed – Kevin Carpenter – was practically a drifter.

Kevin was found dead in his hotel room. At first glimpse it looked like he had died from suicide. There was even a goodbye letter to corroborate this story however his injuries, two slit wrists, would have been humanly impossible for him to do on his own. So either someone assisted with his suicide or they tried covering up a murder with a little creativity. But due to a series of flashbacks this crime is turning out to be good old plain murder.

There were sleeping pills found at the scene. So the detectives chose to follow up on the lead that maybe someone drugged Kevin and arranged his body. Though its Kevin’s own last remaining effects that confuse them. Kevin was an artist and in his drawings – he shows a lot of remorse over something he’s done. Thereby making Kevin look emotionally unstable in his final days.

Whatever Kevin was remorseful about had something to do with a “Robin”. He was looking for someone by that name which coincidentally is the same name as Ian’s new fiancée. Ian and Robin are happy together. He stepped in to help raise her son and seems like a good guy, but not everyone is happy about his involvement in Robin’s life. The son’s paternal grandfather hates the fact that Ian is “pretending” to be his grandson’s father. And so he makes these cruel digs every chance he can get. Like when Robin leaves them alone for anything more than a minute.

So Ian’s had it rough in his relationship and the fact that he’s still sticking around must mean that he really loves this woman. He probably even loves her enough to kill.

Flynn was tracing Kevin’s last few days when she came upon his search for Robin. Kevin would visit each Robin he could find except he never made a visit to the last possibility he could dig up. Instead of going through a round of introductions – Kevin simply watched Ian and his family. And once he was done being a stalker – he started to call and leave these cryptic messages.

Flynn’s visit to Robin and Ian’s made her interested in Robin’s ex, John. He died right around the time Kevin dropped out of school and went backpacking around Asia. And according to reports, he also died from an apparent suicide. Again too big of a coincidence. So they had their ME take a second shot at John’s autopsy and what she found made this second suicide look just as shady as the first. John was hit by a car prior to jumping or being thrown from that bridge.

With the new information, the police started crafting a story about a sorry Kevin who might have killed John one day by accident and then in a panic covered it up. But that story doesn’t add up because of one crucial piece of evidence – Kevin’s old car was never in an accident. They checked and it appeared to be in prime condition.

Ian had lied to the police about knowing Kevin and the police soon found out what else he was keeping from them. They were right when they realized Kevin was in such a state because he was involved in John’s death, but he wasn’t behind the wheel that night. It was actually Ian. Ian was the one drinking and driving. So he was the one that killed John. He killed him and then he cozied up to John’ bereaved girlfriend, Robin.

Ian didn’t mean to hurt John and so when Kevin return from his prolong trip abroad ready to confess – Ian knew he had to get rid of his former friend. He killed two people in order to keep the life he had built for himself and when the truth came out – it not only crushed Robin, but her son as well. He’s now lost two dads.

And just thinking about dads; many fans are wondering about Flynn’s relationship with her new Sergeant, Mark Cross. There’s some leftover animosity on Flynn’s part and that might have something to do with working with her ex otherwise known as her son’s father. Is he Manny’s father? Only time will tell! Stay tuned for next week to see how this all pans out!