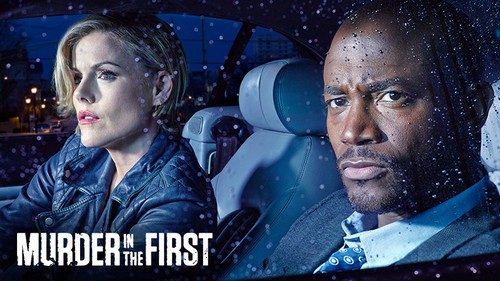 Murder in the First returns tonight on TNT with another episode at 9PM EST called “Who’s Your Daddy”. On tonight’s episode, the investigators search for clues that may link suspects in the death of Cindy Strauss. Elsewhere, Hildy faces a young witness from a past investigation who is concerned for his mother’s safety.

On the last episode, as Inspectors Terry English and Hildy Mulligan began their investigation into the death of Erich Blunt’s flight attendant, Cindy Strauss, Terry had to also deal with the recent death of his wife and the arrival of his sister-in-law. The investigation takes an unexpected turn when the results of Cindy’s autopsy revealed a shocking secret. Did you watch the last episode? If you didn’t we recapped it all here for you.

On tonight’s episode the Inspectors search for clues that might link various suspects, including Erich Blunt, to Cindy Strauss’ death. Meanwhile, Hildy is confronted by a young witness from a past investigation who worries for his mother’s safety after she is physically abused by her new husband.

Tonight’s episode is going to be great. You’re not going to want to miss a minute of the action and we’ll be recapping it live for you as well. While you’re waiting for the episode to begin hit up the comments and tell us your thoughts about the show. In the meantime, enjoy a sneak peek preview of tonight’s episode below.

In this episode of Murder in the First, the show opens with a provocative scene of a sexual encounter between Blunt and another woman. Although it began seemingly consensual, it progressed to something much more aggressive as Blunt force feeds the woman drugs and alcohol. In this scene, it seems very possible that Erich Blunt would be capable of rape, violence, and potentially murder.

Erich Blunt hires a cutthroat attorney to defend him in the case of Cindy Strauss’ murder. The attorney, Warren Daniels, upon discussing his fees, requires that Erich follow three rules. The first rule, which he breaks instantly, is to never confess to Daniels whether or not he actually killed Cindy Strauss. Secondly, he is not allowed to speak to anyone else about the case and Daniels is the only one that can speak on his behalf. The third and final rule is that Blunt is always honest with him.

Dave lands an interview with an attractive single mother who may know something about the Blunt case. The woman’s name is Anna and she appears to have a lot of trust in Dave. She tells Dave that she once worked with Erich Blunt and was raped and almost killed by him. Anna never reported the rape and settled out of court with Blunt. She now feels responsible for Cindy’s death. After getting upset that Dave would be unable to keep her confession confidential, she later returns to apologize for her behavior. The two reconcile and Dave casually asks Anna on a play date with their kids. She agrees.

Hildy runs into a kid from a previous investigation in front of the police station. He tells her that his mom’s new husband is very abusive and raises concern within Hildy. Hildy attempts to offer help to the kid’s mom but she becomes defensive. During a date, Hildy receives a frantic call from the kid asking for help. Hildy arrives at the apartment during the stepdad’s rampage. The man refuses to stop his physical abuse and turns to Hildy with a knife. In response, Hildy shoots him several times in the chest, killing him instantly. Per protocol, Hildy is put on a short leave. With all of the extra time on her hands, Hildy is left at home with her guilt.

Meanwhile, love is in the air for Terry as he looks for a new place with an attractive real estate agent. After touring through a few dumps, he finally finds a home in a modern house boat. There he also gains a “friend” in the real estate agent who knows very well that he is not yet ready to move on after the loss of his wife.

Throughout the episode, many tidbits of information begin to surface about Erich Blunt. Anna’s report shows that Blunt has a history of violence. Terry’s interview with Blunt’s drug dealer reveals that he has a black belt in krav maga; Blunt’s alibi comes from a questionable source; the text message sent from Cindy was done so post-mortem; and DNA shows that he is the father of the fetus. The detectives also suspect that if Blunt was the one who murdered Cindy, it may have been linked to his arrogance and pride.

Overall, there was enough evidence to show that Blunt had the means and the motive to commit the murder. Perez orders for his arrest and Terry and the gang break up the fun at Blunt’s krav maga gym to bring him in. Daniels is not happy about Perez’s decision to make the arrest.