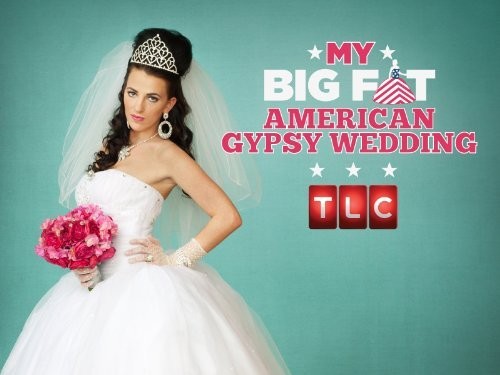 Tonight on TLC My Big Fat Gypsy Wedding premieres with its third season called, “A Love Worth Fighting For.”  In it, two teens from feuding families will do whatever it takes to get married, even though their mothers are standing in the way. Also: A boy hopes to make history as a jujitsu champion.

If you have never watched the show before in the new season through eight hour-long episodes, viewers will go inside this little-known community to follow along as these Gypsies try to put a modern twist on age-old traditions. With family and fashion as the cornerstones of their lives, nothing represents the Gypsy culture like their larger-than-life weddings, which are never predictable, but always outrageous. Beyond their wild parties and over-the-top outfits, the series shares the unique stories of ambitious and proud young Gypsies who are looking to blend their passions and heritage to make a name for themselves outside of their local communities. Also featured is Sondra Celli, the go-to dress designer for the Gypsy community, known for creating custom gowns and adding bling to just about anything to make her client’s dreams come true.

On tonight’s episode two star crossed teen lovers from feuding gypsy families are determined to marry, despite the fact that their controlling moms try to keep them apart. A young gypsy boy attempts to make Romanichal history by becoming the first gypsy jujitsu champion.

Tonight’s episode is going to be an interesting one, which you won’t want to miss. So be sure to tune in for our live coverage of TLC′s My Big Fat Gypsy Wedding Season 3 Episode 1 at 9PM EST! While you wait for our recap, hit the comments and let us know how excited you are about the new season tonight.

On tonight’s episode of My Big Fat American Gypsy Wedding two teens from feuding Gypsy families in Alabama want to be married. 18 year old Heather actually graduated from high-school (which is unusual for Gypsies). She wants to marry 16 year old Brandon who lives in Nashville, Tennessee, who already is working paving driveways. Brandon and Heather met 7 months ago at a Gypsy ball, and they have been maintaining a long distance relationship over the phone and computer.

Heather’s Mom Connie doesn’t want her to get married because she is a single Mom and she wants heather to have everything she didn’t get to have, which includes a college education. She wants Heather to go to college, not get married.

Brandon’s Mom Jeanette thinks Brandon and Heather’s relationship is doomed because Heather is “gorgified,” which means she doesn’t follow Gyspy ways as much as Brandon’s family does.

Brandon and Heather’s relationship is basically doomed from the start. Their families the Smalls and the Boswells have been feuding since before their parents were even born.

In Maryland another teen Gypsy is also following his dreams. James is not worried about getting married though, he is currently training to become a professional mixed martial arts fighter. Josh doesn’t want to be forced to follow in his Dad’s footsteps and have to become a “black topper.” In three days Josh will head to the most important match of his career, an advanced national mixed martial arts tournament, where he will have two chances to win two different titles.

Brandon and Heather’s wedding is supposed to be in just two weeks. Ivan, Heather’s Uncle, agreed to drive her to Nashville to see him for just the second time. During their rendezvous Heather’s Mom Connie shows up at the park and causes a scene, and pulls Heather away from Brandon by her hair and drives her home. The next day Heather tries to run away from home so she can be with Brandon. Connie catches her trying to leave and sits down with her and gives Heather her blessing.

In Maryland Josh’s fight is only one day away. His Dad takes him bowling to “take a break from training” and meanwhile his cousin Chael gets a tattoo to support him during his tournament.

Heather and Brandon’s wedding is in five days, so heather heads to Nashville to meet with Brandon’s Mom Jeanette and try to win her over. Jeanette wants Heather to prove that she can take care of Brandon when they are married, so she cleans their entire house for them. Heather asks Jeanette if she can keep her last name (Smalls) when she gets married, instead of taking her and Brandon’s last name. Jeanette says that isn’t an option, if she is marrying a Boswell, she has to be a Boswell. Heather agrees, but she knows her Mom Connie will be upset.

The next day Heather, Connie, and her sisters travel to Boston to see her Gypsy dress-maker, the traditional dress is everything she wanted and fits her perfectly.

In Maryland Josh arrives at his mixed martial arts tournament. He is nervous that he is going to let his family down, he loses his first match. His Dad tells him that he is an embarrassment, and walked out of the tournament. It’s time for Josh’s second fight, and he loses again. His Dad cools down after the tournament, and tells Josh it is okay that he lost.

It’s Heather and Brandon’s wedding day, the young teens get up and begin getting ready for the ceremony. Once Heather gets her dress on, her brides maids have to help her go to the bathroom and then they head to the chapel. Brandon and his family are waiting for Heather, when she arrives they say their “I Dos.”

After they are officially married Connie flips out because she realizes Heather took the Boswell name. They all head to the party afterwards, and Connie reveals to Jeanette that Heather and Brandon are coming to live with her in Alabama. Connie and Jeanette wind up in a no holds bar brawl at the wedding reception. Brandon and Heather throw everyone for a loop when they announce they have their own place, they won’t be living with either of their mothers, and they will live by their own rules.