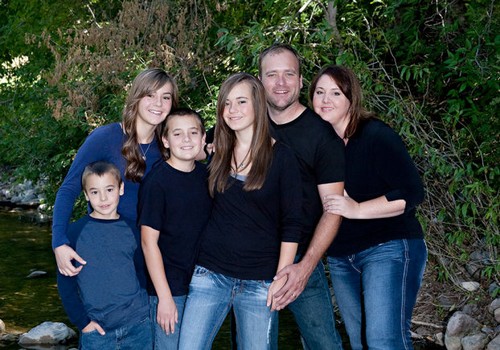 Tonight on TLC their new reality show MY FIVE WIVES premiere.  My Five Wives features Brady Williams, his five wives, and their combined 24 children, who all live together on their large family property outside Salt Lake City, Utah. Following as he balances the needs, hopes, frustrations, and fears of each wife along with his own, the special offers a candid and open look at this controversial lifestyle, and goes behind closed doors to share the intimate details and complicated decisions they have to make as a larger than average family.

Believing in equality for everyone and a God who loves and accepts all — a belief system Brady and his family call progressive polygamy — the Williams family emphasize that their choice to be together is more about their mutual love and commitment than it is about religion. Though their beliefs and their decision to leave their church have led them to be shunned by their community and estranged from many family members, the Williams believe their sacrifices are worth it.

In the premiere of this reality series following the lives of Utah polygamist Brady Williams, his five wives and 24 children.  Brady and his five wives discuss leaving their community which puts the family at odds. Hoping to strengthen communication, Brady suggests the wives “safe talk” out their issues. But when his idea backfires, Brady is left caught in the middle.

We will be covering My Five Wives premiere tonight at 10 PM EST so don’t forget to come back to this site for our full and detailed recap.  Make sure to refresh often to get the most recent details.  While you wait for the recap, let us know how excited you are about the premiere of My Five Wives?

Brady definitely has his hands full with his five wives and twenty-four kids. That essentially means he’s shared among five separate households but at least it’s only in two buildings.  The family owns two large homes and each floor is separated into an apartment with their own accommodations. The only thing these women have to share besides Brady is the laundry room. Something which wasn’t going to be easy no matter how many kids they have

Paulie who is Brady’s first wife has six children. She shares a home with both Robyn and Rosemary. Robyn is the second wife and she has five children. While Rosemary is the wife and she had four children.

Then over at the other house there is the fourth and fifth wife properly known as Nonnie and Rhonda. Nonnie has five children and her sister wife Rhonda has four children. Funnily enough Rhonda dated Brady before he met the rest of the wives but they had broken up. It wasn’t until after he met and married did he and Rhonda give their relationship a second chance.

With such a large family money is naturally the main concern. Brady has admitted that the grocery bill alone costs nearly up to four grand a month. Luckily he chose a well-paying profession – Brandy and his brother Jared run a family construction business. Although Brady is pushing to do something more career wise. He’s been going college for the last two years now.

He had to forego this particular route earlier because he had gotten married right after high school and needed to go to work in order to support his family. That’s still Brady’s obligation but he feels like his kids will appreciate what he’s doing.

His wives on the other hand might have a different opinion. Brandy had forgotten all about a paper one day and needed to pull an all nighter to finish it. This ended up cutting into Robyn’s night and she’s already gets so little time with him as it is. In the mornings, Brady is running around all the houses to see the kids prior to school and then later at the family dinner he has to play catch up with what’s going on. So the wives’ night is a pretty sacred thing.

Brandy’s rotation goes like this – Paulie, Robyn, Rhonda, Rosemary, and Nonnie. Though it might look like favoritism seeing as Rhonda is ahead of two other wives there might be a reasonable explanation for that. She works outside of the house and that was probably the most convenient placement for her night.

And no; the wives never interact in that way with each other no matter what some choose to believe. But speaking of the wives and how they interact, Brady has picked up on a problem. He’s noticed how his wives tend to come to him with a problem instead of speaking it out with each other.

They have a family meeting and that should offer them all the chance to speak up but they don’t take it. Even when it’s about where they’ll possible move. The family has left the fundamentalist church and Brady is seriously considering moving the family out of Utah.  Some wives have a set location while the others want to stay in Utah. So rather than just tell him, Brady asked them to start an open dialogue.

He’s calling it “Safe Talk”. It’s where all the wives can speak open and honestly to each other without fear or judgment. Now Brady warned Nonnie not to get offensive if one of the other wives wishes to speak to her. And she promised she’d listen. However she’s overly sensitive and her guard went up the second Brady spoke to her.

When Paulie came to speak to her about a bill “safe talk” quickly fell apart. Paulie pays all of the bills and one time Nonnie paid a bill. Well, Paulie wanted to know if that was going to be an every time thing so she could factor it out. Nonnie could have given a reason and went with giving a non-committal answer. She simply didn’t like being “confronted”.

Nonnie was hurt by that and she felt this whole “safe talk” thing was only going to keep on hurting people. So she called Brady who was busy at the time trying to make up his missed night with Robyn. He came home to Nonnie who frankly wasn’t making a lot of sense. She told him that she paid the bill herself to do something nice for Paulie. But he’s asking her why she didn’t just say that to Paulie.

Nonnie tells Brady that she has a lot of insecurities and she’s going to blow up over petty things if she feels like someone has a problem with her or with things she’s done.

At the next family meeting, Brady apologizes to his wives for pushing the talks on them. He said the family wasn’t quite ready for it. It seems other wives besides Nonnie were pushing back on the new rule. While Robyn was honestly excited about open dialogue. She’s quiet by nature and the talks would give her chance to speak to the other ladies. She can still do that but it’s going to be harder without a mandate.

If the wives can’t talk to each other without his help then what is that going to mean for Brady?