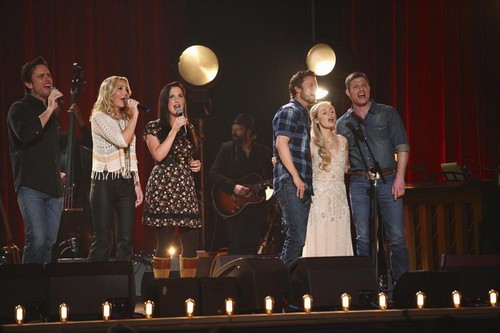 On the Record, is going from your computer screen to your TV screen. Direct from Nashville’s world famous Ryman Auditorium, cast members of the acclaimed primetime series “Nashville” will take the stage to perform show favorites then sit down in the Bluebird Café for acoustic performances and an intimate look at the songwriting process with the songwriters themselves, talking candidly about how this music found its way to the show and what it means to the actors and songwriters.

The show is a documentary web series that follows the life of original songs performed on “Nashville” written by singer/songwriters in the music scene, from the songs’ inception to on-air premiere. The series offers an intimate look into the songwriting process, from guitar demo to music video and all the steps in between.

On the Record airs  on ABC at 10PM EST and we will be recapping the show with all the details for you.  So make sure to bookmark this page and come back for our recap of Nashville: On The Record.  While you wait for the recap, check out a sneak peek of tonight’s episode below.

At the actual Ryman Auditorium in Nashville, the stars of Nashville are performing loud. They talk backstage and many of them have performance jitters. The first song is It’s on Tonight written by Brett Beavers, Dustin Lynch and Davis Lee Murphy and performed by Deacon, Will and Luke (actors Charles Esten, Chris Carmack and Will Chase). Esten and Carmack play guitar live and all three sing. The crowd is going wild and Brett Beavers is in the audience enjoying his song. They end and thank the ecstatic crowd.

Next up is If I Didn’t Know Better written by Arum Rae and John Paul White. Gunnar and Scarlett (Sam Palladio and Clare Bowen) sit at the actual Bluebird with music producer Buddy Miller chatting. And Sam has the hottest UK accent and Clare’s is a light Aussie twang. Miller says he was there the first time Palladio and Bowen met. This was the first song they performed and all three agree they were nervous. Miller says he was very nervous for Sam because it’s a high pitch for a guy and Sam agrees he hadn’t used that part of his range before.

The day after they met, they were in the studio and Clare says she never had used a mic before. Miller says everyone in the control room had goose bumps watching them sing to each other with so much emotion. Then the actors are on stage at the Ryman singing this beautiful song to each other. Sam plays guitar to accompany them. The crowd sits quiet, transfixed, applauding occasionally so they don’t overshadow the haunting song. The crowd applauds heartily when they’re done.

Chris Carmack (Will) says the show is unique because of the collaboration between the actors and songwriters. We see some rehearsal time. The next song is I Ain’t Leavin’ Without Your Love written by Striking Matches and Cary Barlowe. Sam says that songwriters Justin Davis and Sarah Zimmerman (Striking Matches) are like the real-life Scarlett and Will. Justin says their first song on Nashville was When the Right One Comes Along. It was performed on the show at the Bluebird which is where they performed it for the first time in real-life.

I Ain’t Leavin was written the first time they met Cary. Zoe (Chaley Rose) says they knew it was great when the first ran through it on set. Avery (Jonathon Jackson) says being in the room was amazing when they realized it was actually working. Zoe, Avery and Gunnar (Chaley, Jonathon and Sam) take the stage to perform it. The songwriters are there enjoying the show. Both Sam and Jonathon play guitar with the number. The crowd goes nuts when they’re done. They thank the audience.

Luke (Will Chase) says when the show was first pitched that songwriters in Nashville were hesitant but now they see that they are staying true to Nashville, they’re enjoying the collaboration. Next up is Nothing in This World written by Sarah Buxton and Kate York and performed by Juliette (Hayden Panettiere). She sits with the songwriters and Sarah says when she heard Hayden sing it, she thought it was gorgeous. Hayden says she’s terrified of singing on stage. Tonight is her first live show and she’s freaked. Kate says once she walks into the fear, she’ll kill it.

Hayden is introduced and the crowd cheers. She performs with the songwriters that worked with her on #Nashville. She sits on a stool and sings the lead. Sarah and Kate sing backup and harmony with her. Hayden may have been nervous, but you can’t tell by her performance. She has an absolutely stunning voice and sings the challenging riffs without hesitation or error. They end and the crowd is cheering and clapping and on their feet as Hayden leaves the stage. She accepts high fives from the cast and crew.

Layla (Aubrey Peeples) says it’s great to do On the Record and perform everything acoustically at the Ryman is amazing. Clare (Scarlett) and Charles (Deacon) take the stage together. She’s so cute and barefoot. They will be performing This Town written by Jaida Dreyer, Andrew Rollins and Cory Mayo. Charles says their show is a love letter to the city of Nashville but this song isn’t a love letter. The writers say they wrote it in about an hour and Jaida says she was in a dark place about the industry when she wrote it.

Clare talks about how tough the industry is. Andrew says the show has opened up many doors for songwriters and says he’s grateful. Charles and Clare actually wrote with them and found it thrilling. He says reality and the show are overlapping. Jaida says she can’t wait to see their song performed on-stage at the Ryman. Clare and Charles sing. For this number, Charles doesn’t play his guitar. It’s a sad song about how Nashville can surpass your dreams or crush your soul. The applause is thunderous!

Next is the killer tune Don’t Put Dirt on My Grave Just Yet written by Trent Dabbs and Caitlyn Smith. If you recall, this is the number that Juliette (Hayden) sings defiantly after she gets fed up with all the scandal about being misquoted as saying “there is no God” and being subjected to protests and haters. Buddy sits with the writers to talk about the song. He asks them where it came from and that killer phrase.

Trent says that he heard the phrase on the radio about a sports figure. Frankie Pine – the show’s music supervisor says they wanted it to be a kiss off for the show. They ask the songwriters if they’ve heard their work performed at the Ryman and they say it will be their first time and how excited they are. Hayden takes the stage and gets the crowd all riled up before she starts singing.

The writers are singing back-up for her and look pleased. The crowd is singing along – all the young girls seem to know every word to the number. Hayden blows big kisses and tells the audience she loves them all so much. They respond with applause and love.

seeing people’s faces change as they feel and take in what you’re saying is her favorite thing to do. She is going to perform Black Roses written by Lucy Schwartz. This is the song from the show that’s dedicated to Scarlett’s controlling and abusive mother as a testament to her cruelty. Clare tells Lucy that the song is beautiful. Lucy says she wasn’t thinking mother and daughter when she wrote it.

Clare says it means something different to everyone that hears it. Lucy says she was thinking man-woman. Clare says she’s excited to have Lucy on-stage with her at the Ryman to perform. Clare sings and Lucy plays the piano for Black Roses. The audience is so quiet you can’t tell they’re even there. Some of the people in the audience have tears running down their cheeks. Clare sings it so hauntingly. She warbles out the last few notes and the Ryman explodes into applause. Clare introduces Lucy and pulls her forward. They bow together to a standing ovation.

Connie Britton (Rayna) has a quick spot where she apologizes for not being able to participate in On the Record and then she announces a sneak peek of next week’s Nashville and OMG! Scarlett has collapsed, Luke is unsure about Rayna and much, much more excellent drama!

Chris (Will) says the Ryman sounds so amazing. Aubrey (Layla) talks about being on-stage where Johnny Cash and June Carter sang. Songwriters Ashley Monroe and Sarah Siskind sing with Aubrey and Charles. They do A Life That’s Good that was performed on Nashville by the tiny vocal powerhouses Lennon and Maisy Stella (Maddie and Daphne Conrad on the show).

They are joined on-stage and in song by Charles, Clare, Chris, Jonathon, Hayden, Chaley and Sam. They’ve got all the singing cast out there except for Connie (Rayna) who isn’t at the show. It’s lovely but not quite the sweet little song it was when the two young girls sang it on the show. It’s a very nice closing to their live show. The crowd eats it up and are all on their feet. Charles thanks them for coming.