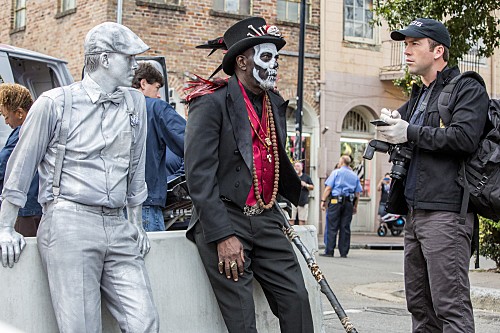 Tonight on CBS NCIS: New Orleans continues with an all new Tuesday November 11, season 1 episode 7 called, “Watch Over Me.” On tonight’s episode a navy officer with the highest level top secret clearance is murdered, after he was recently assigned as a tech liaison with a private developer. Meanwhile, Pride [Scott Bakula] transforms the carport into an auto shop when he works on the first car he gave his wife.

On the last episode with New Orleans decorated for Halloween, the NCIS team investigated the murder of a Naval Staff Judge Advocate found in a cemetery dressed in a Victorian costume with vampiric puncture wounds on her neck. Meanwhile, the team debated what Halloween night activity and costumes would be best. Did you watch the last episode? If you missed it, we have a full and detailed recap right here for you.

On tonight’s episode as per the CBS synopsis, “the NCIS team investigates the murder of a Navy Officer with the highest level top secret clearance who was recently assigned as a tech liaison with a private developer. Also, Pride transforms the carport into an auto shop as he works on the first car he ever gave his wife.”

A commanding Naval Officer was murdered on tonight’s episode of NCIS: New Orleans and the team is working with a crucial time table on finding out who the culprit before there’s a possible high level security breach to go along with the murder!

Commander Wilson was found dead in his car with a protruding weapon sticking out of his chest (so no surprise on the cause of death). And before he died he had extremely high security access. Meaning he was let in on Drone projects and other secretive missions for the government. But what was peculiar about his crime scene (besides the weapon) is that Wilson was also barefoot. As if he was attempting to run away from something or someone when he was murdered. So the guys were left with no choice. They had to go to his house to see if that was the point of origins leading up to the murder. Yet they had suspected there would be a second victim awaiting them. That time it ended up being Wilson’s assistant, Becca.

The assistant was naked and appears to have been using the tub when she was murdered. And this initially leads the NCIS team to believe that she was his mistress. Wilson was currently going through a divorce at the time of his murder and with a murdered naked woman to boot – his wife became their number one suspect.

However, she denied all culpability and later the team found out that Wilson and Becca were never involved in “that” kind of way. So Wilson’s work became the focus of their investigation and Dr. Wade was Sebastian were able to be of assistance.

There was a foreign object found inside of the Commander. Ad it’s something he probably wouldn’t have put there himself. A piece of device was inside Wilson and it’s commonly used to spy on whoever it’s inside of. According to Sebastian, the device picks up on whatever computer or cell phone that is near. Then it collects as much data as it can before being transmitted back to its owner.

So someone must have been spying on Wilson!

Wilson was assigned as a tech liaison with a private developer. He was supposed to help whatever the company built to be able to integrate into the Navy. And it’s all classified. But apparently that wasn’t going to stop a certain someone.

Wilson and his assistance were targeted because of they what they knew. Yet this third party still wasn’t satisfied. He later targeted Wilson’s estranged wife just to see what she knew. And luckily Pride managed to come to rescue and save the widow from her potential murderer.

Pride then had to take the widow into protective custody and that left the rest of his team to try picking up the slack. And what they found is that prior to his death – Wilson had met with another techie. A man that was actually fired from the same private firm Wilson was working with.

But when Christopher and Brody found this techie – he was already gone. He had been murdered a few hours before either Wilson or his assistant. Someone was definitely cleaning up shop and sadly the widow had gone to see her husband one finally time before they signed the divorce papers. So, the killer, might think Wilson could said a few things to his wife, while she was still his wife that is, in confidence.

So she was targeted a second time while in protective custody!

Yet, Mrs. Wilson ended up being the key the team needed to find her husband’ murderer. Wilson had one thing on him when he died and it was a piece of jewelry. The same kind of jewelry that matches presents he had given his wife over the years.

A second glass at the locket resulted in the team finding a memory card inside of its clasp. Wilson it seem had accidentally gotten his hands on an email detailing a faulty bombing system inside of the drone the private firm had been alleging was in good working condition.

Wilson had taken the information to another man in order to validate it so that he could then bring it to his superiors but everyone who knew of the email is now either dead or behind the murders. And that’s how the team found their killer.

The company owner had contracted Wilson’s death and the man she paid to do the job had gone above and beyond of what she had asked for. And his relentless targeting of Wilson’s widow is funnily what brought both of them down.