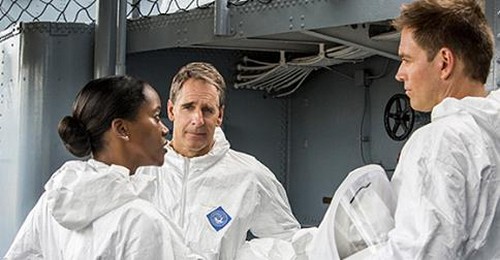 Tonight on CBS NCIS: New Orleans returns with an all new Tuesday September 30, season 1 episode 2 called, “Carrier.” On tonight’s episode a Navy lieutenant on liberty dies from the bubonic plague. Special agent DiNozzo is sent from Washington, D.C., to help the New Orleans team locate all additional sailors on liberty, prevent a potential outbreak and determine the source of the highly infectious disease.

On the last episode a case turned personal for Pride when the body of a Petty Officer was identified as a former gang member he once mentored. Meanwhile, Brody continued her search for the perfect place to call home in New Orleans. Did you watch the last episode? If you missed it, we have a full and detailed recap right here for you.

On tonight’s episode NCIS Special Agent Tony DiNozzo assists the New Orleans team when a Navy lieutenant on liberty dies of the bubonic plague. The team races to locate all additional sailors on liberty, control a potential outbreak and determine the source of the highly infectious disease.

This is definitely one series that you don’t want to miss. Don’t forget to stay tuned to Celeb Dirty Laundry where we will be live blogging every episode of NCIS: New Orleans’ premiere season.

A navy man on leave was relishing his time off at one of the many parties going on in New Orleans when suddenly he began feeling sick right in the middle of it. So, assuming whatever he had wasn’t that bad, he just thought he needed some air and yet after he got some he still wasn’t feeling better. His symptoms unfortunately grew so bad he accidentally stumbled in front of a taxi and was hit head on.

Navy Lieutenant Lewis Collier died that night and according to initial findings from Loretta – his death was deemed suspicious. As matter of fact it’s the only red flag about him. He was literally a boys’ scout his entire life. Straight A’s all through college and not one infraction against him both before and after joining the Navy.

Even the party he stumbled out of wasn’t his typical scene. He only went there as a favor to his friends. And so his fiancée asked Pride to personally find out what really happened to Lewis.

Pride felt so bad for her he actually went down to the ME’s office in order to personally oversee the rush on the autopsy and luckily he never got the chance to do so. He got caught up in talking to Sebastian and by time the alarm went up – he was a go distance away from the contamination site. Loretta on the other hand needed to be cleared before she could Lewis’s body.

Lewis was neither drunk or on drugs the night he died. It seems his erratic behavior came about after he was exposed to the bubonic plague in possibly the worst case Loretta had seen in years. Now everyone that was on the ship with Lewis has to be tested to see if they were also exposed. They don’t know when or where ground zero happened so it’s in the public best interest to treat everyone they know was around Lewis.

[11:04:56 PM] Kristine Francis: Sounds easy but most of the crew members that were with Lewis are on leave as well so they’re not all in one place to just round up. So to catch one navy man they had to break up a card game and fight a hillbilly from the bayou.

Then there was the hard part. NCIS needed to question members still on the ship and that meant Pride has to risk exposure in order to climb aboard. Although he wasn’t the only one putting himself at risk. Agent DiNozzo joined him. He’s taken to calling himself the plague whisperer and together they found a dead serviceman onboard.

The man had claimed he needed rest and had died without anyone noticing. Yet it’s what else that was in his room that interested the agents. The guys found a rat so of course they assumed it was the ugly little beast’s fault.

But they were wrong. The rat wasn’t the start of the plague at least not this time. The bacteria found inside of both victims came from a pure strain. Something they would normally see if the plague had been manufactured in lab. And what do you know a lab recently reported a break in. So this outbreak wasn’t an accident. It was an act of terrorism.

However the terrorist behind it didn’t necessarily want to want to hurt Americans. The guys simply wanted to make a quick buck.

Pride had found out that the doctor that has been helping them also joined the ship while it was out in the ocean. Hence there was a reason he was never on any official logs. That doctor has been going through the motions of bankruptcy and was about to lose everything he had in his name. And this included his pharmaceutical company that was miraculously began working on a cure prior to the outbreak.

Though the doctor didn’t want to stop there. The team found him traveling to a convention where he would have gone on to infect a group of doctors from all around the world. When they caught him – all he could say was that he made a mistake. As if that could everything better again.

And, yes, this team is still working out their kinks (Pride seems to be the one holding them all together) but so far they’re proving to be a very effective team!