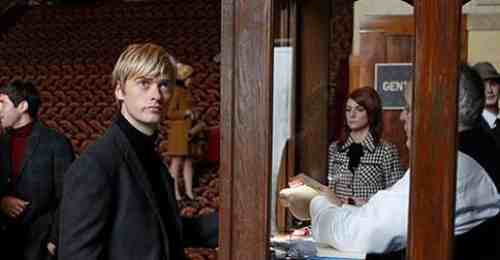 Tonight on CBS NCIS continues with an all new Tuesday October 7, season 12 episode 3 called, “So It Goes.” On tonight’s episode Ducky [David McCallum]returns to London after a case reveals a connection to his estranged childhood best friend. Agent Bishop accompanies him on the trip, and they interview his friend’s family and coworkers. Meanwhile, Ducky recalls the choices he made in the past and the impact they’ve had on his adult life.

On the last episode a Navy lieutenant was murdered on his way to a private meeting with the President. The NCIS team try to determine if the death was part of a recent series of muggings in the area or if it was a targeted hit to keep intelligence secrets. Did you watch the last episode? If you missed it, we have a full and detailed recap right here for you.

On tonight’s episode when an NCIS case reveals a connection to Ducky’s estranged childhood best friend, he and Special Agent Bishop travel to London for interviews with family and co-workers of his friend. While there, Ducky finds himself reminiscing about the choices he made in his past and the subsequent impact they had on his adult life

A car blast in Virginia drew the NCIS team to a case that from all appearances doesn’t have that much attachment to the Navy. The victim of the blast was not in fact a servicemen. And the team was merely called to the scene because oddly enough there was paperwork for deployment found inside of the vehicle.

Besides the paperwork, the only other thing that the team needed to focus on was finding out the actual identity of their victim. At first the man that died was mistakenly identified as someone called Angus. A man Ducky knew in his youth and yet still referred to as his best friend despite the rift that ended up leading to the breakdown of their relationship. So naturally Ducky was grieving over his friend and it came as surprise even to himself when he was later able to rule out the assumption their victim was Angus.

As it turns out the poor man that died worked for Ducky’s friend. He was Samuel Culpepper and he was an associate’s of Angus. Both men were in London a few days ago and Samuel might have been the last person to have seen Angus alive.

The GPS coordinates from the car revealed that Angus, or someone acting in accordance to Angus’s will, was heading to NCIS headquarters. It seems like he wanted to get into contact with Ducky about something he must have thought was important at the time. But one of his channels failed to carry the message. The car heading to the headquarters never made it. Although the email he sent Ducky – did!

Angus was sending Ducky a file on servicemen that had allegedly died from normal circumstances but for some reason Angus had his suspicions. So Abby looked through his list and she started to question whether or these men were murdered. However before she got the chance to write all of them off – she noticed that was someone on the list was still alive.

Thankfully the guys were able to get to him in time. They literally reached him just as he was about to have a “heart attack”.

Once the team started to investigate why the serviceman had all died they then spotted a peculiar connection. Each man that died were all from or had connections to Albania and somehow they also had the same person listed as their emergency contact. And this mystery man they had put in charge of their welfare in case they were incapacitated wasn’t exactly a priest. He was more like a well-known killer for the Albanian Mafia.

Plus, he was living in London under an assumed name that granted him a lot of privileges from inside of Angus’s hotel. Luckily, Ducky was also in London to deal with him. Ducky had gone to see what happened to Angus but by time he had gotten there it was much too late to help his friend. Angus was found at the bottom of a river.

And the only person left in the city Ducky needed to see was Angus’s widow. Maggie is her name and she was the reason he and Angus had fallen out. As the story goes they were both in love with her and in the end she chose to be with Angus. Then she came to regret it!

So Ducky was comforting the widow when they were targeted by a crazed Albanian. The hitman was pretending to be Angus’s secretary when what he was really doing was intimidating Angus into allowing prostitution ring to run from inside of the hotel.

Prostitution and drug smuggling was all too much for Angus so he tried to work against his handler and that ended with his death. Ducky though was able to get justice for him. He took care of the Albanian and he shut down their little ring.

Afterwards, he sort of asked Maggie out. She was never happy in her marriage and he never got married so maybe they should finally see where it goes with them.