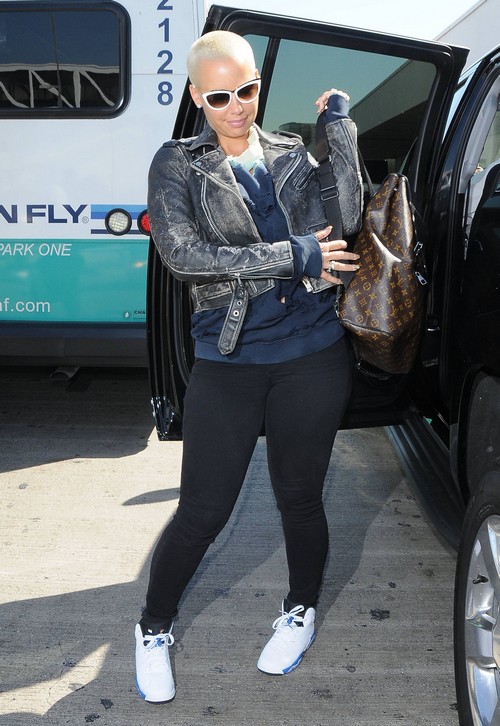 Nick Cannon has signed model and Wiz Khalifa’s wife, Amber Rose to his management label, Ncredible Entertainment.  She will star in a new reality show about Fashion and women empoerment, and also release a book,  Rose had already been cast in Nick’s movie School Dance where she played a popular high school student.

According to IMDB, the film is about a high school student named Jason who tries to get a date with his dream girl Anastacia by winning a spot on the school’s hottest dance crew.

Amber has said in an interview that she approached Nick to cast her the the film. She told The Source magazine, ‘[I said] “Nick! Look! I would really really like to have a part in this movie, if you could write me in somehow or just give me a role,” and that’s exactly what he did.’

‘So, it was just really cool. Me and Nick are good friends. Just being on set with all of those comedians was just hilarious. We laughed until we cried every day.’

Since his recent split from Mariah, Nick has really been focusing on his career.  Recent reports are saying he could gain custody of their three-year-old twins Monroe and Morocco, though Nick has said Mariah is an incredible Mother.

A source told Life & Style  Mariah’s friends and family are worried she may have a mental breakdown like she did in 2000.  A source says “Her drinking has gotten out of control lately,” New York divorce and family lawyer Raoul Felder told Life&Style: “Mariah has visibly changed so much in one year – she looks wiped out, something isn’t right. The judge will take that into account in a custody battle.”

Nick Posted this on Twitter Wednesday,  “What infuriates me most is to hear people slander @MariahCarey. I will forever be in debted to her for blessing me with our children… I will always love her unconditionally for this and so much more. @MariahCarey is an amazing Mother and I trust her wholeheartedly…”

It’s been confirmed over and over again that Nick Cannon is a cheater.  Working with the beautiful Amber Rose, his new girlfriend and Wiz Khalifa should be worried.