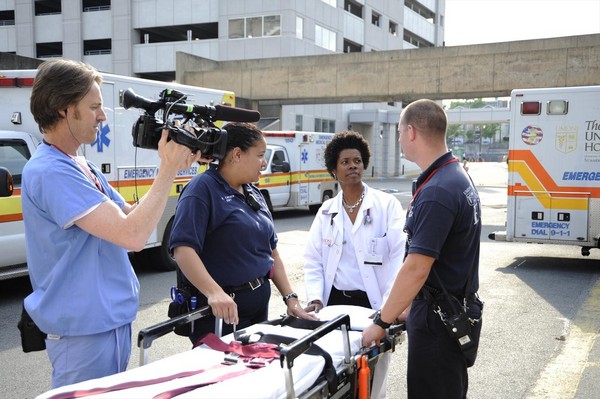 Tonight on ABC’s hit drama NY Med continues with a new episode. On tonight’s show the documentary series following the staff and patients at New York-Presbyterian Hospital begins its second season, which also crosses the Hudson River to chronicle the work at University Hospital in Newark, N.J.

For those of you who are not familiar with the show, NY Med is this fast-paced, eight-part series mostly that toggles between the orderly operating rooms of Manhattan’s New York-Presbyterian Hospital – the primary venue for the series – where renowned surgeons perform feats of medical brilliance and the sometimes hectic trauma wards of Newark’s University Hospital where skilled doctors gallantly struggle to treat a flood of gunshot, stabbing and life-threatening trauma cases

On tonight’s show after nearly two years of production, “NY MED” is back. This fast-paced, eight-part series mostly toggles between the orderly operating rooms of Manhattan’s New York-Presbyterian Hospital — the primary venue for the series — where renowned surgeons perform feats of medical brilliance, and the sometimes hectic trauma wards of Newark’s University Hospital where skilled doctors gallantly struggle to treat a flood of gunshot, stabbing and life-threatening trauma cases. The surgeons of NY MED never forget that there are limits to what medical science can do and that sometimes their best efforts come up short.

Tonight’s NY MED is going to be intense, and you won’t want to miss it. So be sure to tune in for our live coverage of NY Med — tonight at 10 PM EST!  While you wait for our recap, hit the comments and let us know how excited you are about the new season of the NY Med?

The premiere of NY Med kicks off tonight with ER Nurse Katie Duke and her team receiving their first patient. A girl comes in form surfing and has sunburn so badly that she can’t walk. She has blisters on the back of her leg the size of golf balls. She will be admitted to the burn unit and have to stay in the hospital for a few days on antibiotics.

Dr. Oz’s first patient comes in with an aneurism on his aorta; while he is talking to him about his upcoming heart surgery the patient has severe pain in his back and can’t breathe. Dr. Oz holds his hand and talks him through it and reassures him he isn’t going to die.

Dr. Ashley Winters is a urologist, and she is checking on one of her regular patients who has a penis implant so that he can still get erections. Her patient jokes that he loves having sex.

Dr. Oz’s patient Juan is in bad shape; the tear in his aorta is growing and they are rushing him to ex-ray so that Dr. Oz can see if they can perform surgery. Dr. Oz gets the worst news and learns that his aorta shredded in half and he may require emergency surgery.

Dr. Winters is replacing her patients’ penis implant. She is only a resident, and the operating doctor lectures her about where to insert the tube. The surgery is successful and they just need to keep the patient overnight.

Dr. Steig’s patient John has a tumor in his spine at his neck. His tumor is at a very important part of his spine, as it grows it could crush his spine and he will inevitably be paralyzed. He is preparing to go into surgery, with his wife by his side.

At the emergency room, Katie Duke receives another patient; he fell while he was at work and he hit his head. While she is trying to talk to him and determine how badly he is hurt, and whether or not he speaks English, he has a seizure. His sister reveals that he has been epileptic since he was young and doesn’t take his medication.

Dr. Steig prepares to take Shawn in to surgery and remove the tumor in his spine. His wife walks him in to surgery and kisses him good-bye. She is trying to stay strong for him, but she is concerned about how dangerous his surgery is.

Katie receives a phone call from head trauma and learns that seizure patient has made a full recovery and he is up and walking around and totally coherent.

Dr. Steig scrubs in and begins the life-saving surgery to remove the tumor from Shawn’s spine. Meanwhile, down in the emergency room, Katie is fired and escorted off the property after working at the hospital for six years. Apparently, she posted a picture of an empty emergency room covered in bloody rags and tagged it “man vs train.” She walks down the street sobbing, and confesses that she probably shouldn’t have posted the image online, but sometimes she doesn’t think before acting.

Dr. Steig has successfully removed Shawn’s tumor and rushes it to the pathology lab to see whether or not it is cancerous.

A multiple gunshot victim arrives at the emergency room; the doctor orders an x-ray and realizes one of the bullets may have went through his heart. He talks to the family and explains that his spine, lungs, and possibly his heart are injured. He orders an MRI and realizes that the patient’s heart is okay and he will not have to go through immediate heart surgery. However, his spine and his lungs are still in trouble.

Dr. Steig receives a phone call from pathology and learns that Shawn’s tumor is not cancerous. However, there is some concern because there is some issues with the sensory function in his right arm. He won’t be able to tell for sure how serious the damage is until Shawn wakes up.

The gunshot victim makes a miraculous full recovery, after taking seven bullets to his chest and abdomen. After a few weeks he is up and walking again, and his released to head home to his family. He boasts that he has a new lease on life and is “done with the nonsense” that got him shot.

Dr. Oz’s patient Juan returns to the hospital ten months later after a few surgeries to pay Dr. Oz a visit and thank him for everything he did for him. Dr. Oz is amazed by Juan’s recovery, most patients with an aorta tear don’t survive the ordeal.

Dr. Steig checks in on Shawn while he is recovering from his surgery; Shawn is excited to report that he was able to walk down the hallway. His right arm is still tingling; however, he is regaining strength every day.

ER nurse Katie Duke was rehired to work at another hospital’s emergency room in the city. She is on her second day so far and her fellow employees are impressed with how fast she is catching on and settling into the new hospital.