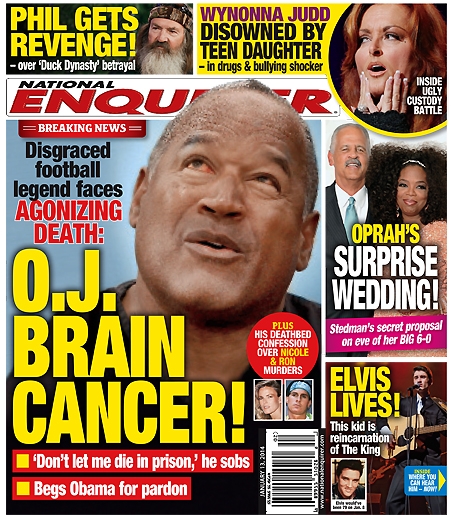 O. J. Simpson may have to spend another 4 years behind bars before he’ll be eligible for parole and according to prison doctors he may not exactly have time on his side. Simpson is supposedly severely depressed after learning that he may be suffering from a cancerous brain tumor not long after beginning to take better care of himself. In recent months the former football hero had realized that his diabetes could kill him and had opted for a healthier lifestyle behind bars. Now he feels like a dead man walking anyway.

According to the Jan. 13th print edition of National Enquirer Simpson’s temper also has a very short fuse. Inmates supposedly kept asking him about Nicole Brown Simpson until Simpson finally admitted to killing her and said he’d do it again in a heartbeat if the situation arose. Simpson reportedly believes that he is dying so it doesn’t matter too much what people think anymore. He has supposedly said that he plans to confess to the crime before he dies so maybe he is getting ready to own up to his horrific behavior.

As for symptoms, it seems that Simpson is textbook with headaches, blurry vision and seeing double. Prison docs reportedly are in the process of getting OJ ‘s prison medical documents together and they expect to have him scheduled for an MRI very soon. Could OJ possibly be suffering from a brain tumor? If so, what secrets will he tell before he dies. Do you think he really is man enough to admit to killing Nicole? Tell us your thoughts in the comments below!