BY Amanda Austin on March 20, 2014 | Comments: 3 comments
Related : Once Upon A Time In Wonderland, Recap, Television 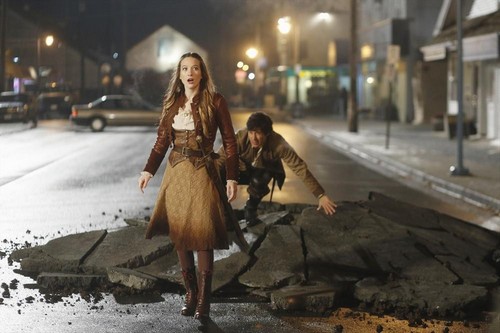 ONCE UPON A TIME IN WONDERLAND returns to ABC tonight for another magical episode. In “Heart of the Matter” the Red Queen’s in jeopardy and only the Knave can save her, but the cost is high. Meanwhile, Alice and Cyrus learn shocking news about prisoners under Jafar’s control; and in a flashback, Anastasia prepares to marry the king and befriends Cora.

On the last episode Cyrus’ actions led to a fateful day that left his mother near death, resulting in a decision that came with a binding price he and his brothers had to pay. Meanwhile, after banding together, Alice, Cyrus, The Knave and the Red Queen split up into two groups that left the Knave and the Red Queen face to face with the fearful Jabberwocky, and Cyrus’ guilt about his past tested his relationship with Alice.  Did you catch the last episode? If not then we have a full recap of it for you right here.

Alice and Cyrus discover alarming information involving prisoners Jafar has under his control and changes their priorities. Meanwhile, the Red Queen is in critical danger and no one can help her except the Knave by surrendering information to Jafar that he’s been desperately seeking. In flashback, Anastasia is about to marry the King and strikes up a friendship with Cora that directly impacts Will. Cora also confronts Will resulting with him asking her for a shocking demand, on “Once Upon a Time in Wonderland,”

Tonight’s new series is going to be exciting, and you won’t want to miss it. So be sure to tune in for our live coverage of Once Upon A Time in Wonderland episode 11 — tonight at 8PM EST! While you wait for our recap, hit the comments and let us know how your excited you are about the new series.

Tonight’s episode of Once Upon A Time In Wonderland begins with Cyrus paying Caterpillar a visit, and asking for his Lost and Found compass back. Meanwhile a shrunken Alice sneaks behind Caterpillar and retrieves the compass while he gives Cyrus the run around.

Jafar is in the palace with the three genie bottles, starting the spell. The Jabberwocky lies on a sofa watching him. The Red Queen is in the basement in a hanging cage next to Jafar’s Dad, while the tower shakes from Jafar’s magic spell. The Red Queen has a flashback of when she first arrived to the palace, and the Queen offered to teach her how to do magic.

Alice and Cyrus are trying to use the compass to track down Cyrus’s Mom. Tweedle arrives and warns Alice and Cyrus on behalf of Red Queen that she used her three wishes and Jafar is about to do the spell. Cyrus pockets the compass and tells Tweedle to lead them to the palace. Tweedle warns that the Jabberwocky has been released, but Cyrus isn’t fazed.

Alice and Cyrus arrive at the tower and Anastasia is shocked to see them, but they run into the shadows and hide when Jafar and the Jabberwocky arrive to see Anastasia. She denies to Jafar that she has anything to do with Will’s protection spell. The Jabberwocky reveals to Jafar the reason she can’t read Will is because he doesn’t have a heart, read Alice and Cyrus’s minds, and she knows that they are somewhere in the dungeon.

Alice and Cyrus escape from the dungeon through the secret passages. Jafar threatens to slice Anastasia’s throat if Will doesn’t tell him where his heart is. Will caves and tells Jafar where it is located.

Meanwhile Alice and Cyrus are already en route to Will’s heart, they know if they can get to it before Jafar then he won’t be able to perform the spell. There is a slight predicament though, his heart is not in Wonderland.

Will and Anastasia are stuck in the dungeon, Will reveals that he had his heart taken out because she had broken it and it was too painful. The reason Anastasia never met Will at the wagon and chose to marry the King instead is because The Queen told her that Will wasn’t waiting for her, and it was already too late. Anastasia reveals that she wishes they had never come to Wonderland and never learned about magic.

Meanwhile in Storybrooke Alice and Cyrus find Will’s heart hidden in the wall of his apartment. They return to Wonderland with the heart and are trying to determine where they can hide it that Jafar won’t find it. Jafar appears, and uses his staff to overpower them and steal Will’s heart. He tries to kill Cyrus with his snake staff, but something strange happens and Cyrus is immune to it. (Jafar confined Cyrus’s Mom to the snake staff years ago, which is how she is still alive.) His own staff throws Jafar on the ground and Cyrus picks it up. In a strange turn of events Jafar can’t use his magic staff anymore, he grabs Will’s heart and runs off into the woods, leaving the snake staff with Cyrus and Alice.

Alice and Cyrus use the Lost and Found compass to put two and two together and realize that his Mom is trapped inside of the snake staff. Now, they just need to figure out how to free her from Jafar’s staff.

In the dungeon Anastasia apologizes to Will for everything she put him through. She knows he will never love her again, but asks if he will ever forgive her. Will tells her “anything is possible in Wonderland.” She hopes Will gets his heart back because he deserves to feel love, even if it isn’t for her. Jabberwocky and Jafar interrupt them, and barge into the dungeon. Jafar slams Will’s heart back into his chest. Once he has his heart back in his chest, he gets up off the ground and kisses Anastasia. Jafar pulls Will out of the dungeon and kills Anastasia right in before his eyes.