BY Amanda Austin on March 6, 2014 | Comments: 2 comments
Related : Once Upon A Time In Wonderland, Recap, Television 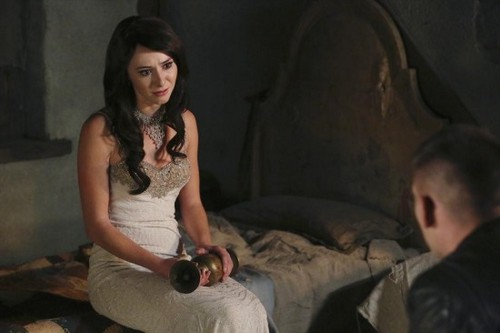 Tonight on ABC their new fantastical, epic adventure ONCE UPON A TIME IN WONDERLAND finally returns an almost 3 month hiatus.  On tonight’s ninth episode called,  “Nothing to Fear,”  the red Queen and Alice band together to find the Knav and Jafar seeks out the Jabberwocky in the Spring Premiere.  Did you watch the last episode before the hiatus?  We did and we recapped it right here for you.

On the last episode  in flashback, we learned about Cyrus’ origin story while Alice sought out the White Rabbit for answers involving his actions in Wonderland. Meanwhile, the Red Queen and Jafar’s disdain for one another came to a head, followed by a series of chaotic events. The insurmountable consequence caused by their showdown put everyone in danger and led to a drastic change.

On tonight’s episode the Knave is released from the bottle by Lizard and she is given the opportunity to make her dreams come true with three wishes. Cyrus, and a reluctant Alice, partner with the Red Queen to find and rescue the Knave, while the Red Queen is captured by peasants who want payback for her cruel reign. Meanwhile, Jafar has taken over the Red Queen’s castle and learns of a fearful creature called the Jabberwocky who he plans to ally himself with.

Tonight’s new series is going to be exciting, and you won’t want to miss it. So be sure to tune in for our live coverage of  Once Upon A Time in Wonderland episode 9 — tonight at 8PM EST! While you wait for our recap, hit the comments and let us know how your excited you are about the new series.

Tonight’s episode of Once Upon A Time In Wonderland opens with Lizard finding Will’s genie bottle floating down the stream.  She picks it up and takes the lid off, and Will climbs out of the bottle.  He realizes he is free and tell Lizard he has to go, but he can’t walk away from her.  He pulls wishes out of his back pocket and tells Lizard that he is his master.  Will is the new Genie.

Alice wakes up to Cyrus and the Red Queen.  She doesn’t remember what happened.  Cyrus explains to her that Will saved her by wishing away her suffering, and his wish also freed Cyrus from the Genie bottle.  But, there always has to be a Genie.  So, Will had to take his place.  Alice agrees to team up with Cyrus and Red Queen to go on a rescue mission and find Will and save him before Jafar finds him.

Jafar has taken over the Queen’s palace, sitting in her throne, and arguing with his Dad who he is still holding captive in his giant cage.  Jafar’s Dad says he doesn’t regret trying to kill him.  Caterpillar arrives and tells Jafar that he had no luck, and he doesn’t know where the genie bottle is.  Caterpillar says there is an ancient creature that may be able to help him, once you tell the creature what you want, nothing and no one can stop it from getting it for you.  It’s called the Jabberwocky.

Red Queen, Alice, and Cyrus are following the river, looking for Will.  They are busy talking, and realize that Red Queen is no longer with them.

Red Queen wakes up in the woods surrounded by a bunch of very unhappy people of Wonderland, they blame her reign of terror for their poverty.  The leader of the men tell the Queen that she is going to pay for everything she has done to them.

Jafar takes Tweedle’s head out of a box.  He cuts off a guards head, and tells Tweedle he can have the body if he tells him where the Jabberwocky is.  Tweedle begs Jafar not to unleash the Jabberwocky, it took 500 men to lock it up.

Lizard and Will are in town, and Will uses the first wish he gave Lizard to give beers to all of the villagers.

Jafar is trying to get past a guard to get in to see the Jabberwocky.  The guard warns him that no good will come of unleashing the Jabberwocky, and tells him the only thing locked in that prison is death itself.  Jafar strong-arms the guard and heads into the Jabberwocky’s prison.

Meanwhile the crazy village people are tying Red Queen up to a stake, and are planning to tie her to a pole and leave her overnight so that the creatures will come eat her.  Alice and Cyrus are watching from the bushes, trying to come up with a plan.  The Queen is trying to talk her way out of it, but failing miserably.  Cyrus and Alice try to come to her rescue, but they end up tied up to poles next to the queen.  Darkness falls, and they hear growling and barking coming from the woods.  The creatures are coming.  Alice throws the creatures her glowing heart necklace and buys themselves some time to escape while they gnaw on it.

Lizard is obviously in love with Will, but he has no idea.  He warns her that she can’t use her wish to make someone fall in love with her.  Lizard confesses that the man he likes, doesn’t like her back.  And, then she admits to Will that he is the man she is in love with.

Alice, Cyrus, and the Red Queen are making their way through the dark woods.  Alice is upset that she had to sacrifice her necklace, and she confesses to Cyrus that she is afraid there will always be another mission preventing them from being happy.

Jafar is making his way through a trail of dead guards and skeletons trying to find the Jabberwocky.  He hears a woman’s voice, she keeps saying “Jabber Jabber Jabber” and warns him she is going to open the door to get inside of his head.  Jafar calls her bluff and says he grew up around dark magic and she can’t get inside of his head.  She laughs at him, and tells him she is already inside his head.

Alice, Cyrus, and Red Queen arrive at the village that Lizard and Will are in.  They know he must be inside because there are fireworks going off, the village is too poor to afford fireworks, so they know it must have been a genie’s wish.

Will is explaining to Lizard that he can’t love anyone, without a heart.  Lizard says “I just wish you could feel something for me.”  A cloud of smoke goes off, and Will gets sucked back into the bottle.  He watches Lizard through the window of the bottle as she dies right in front of him.

The Red Queen arrives and finds the bottle lying on the floor and Lizard dead.  Will and Alice are wandering around the village, and the Red Queen brings them the bottle.  Before she hands it over, she rubs the bottle, and Will jumps out.  Now the Red Queen is Will’s master.

The Queen reveals that they can’t let Jafar get Will.  He already has two genies, if he gets a third his power will be unstoppable.  Cyrus breaks down, he realizes the other two genies are his brothers.

Jafar is still in the dungeon talking to the Jabberwocky, she agrees to join him and help him find what he seeks.