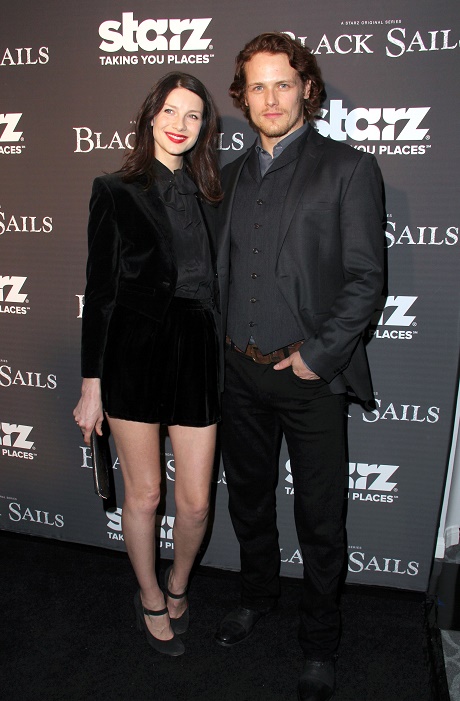 Are Outlander stars Sam Heughan and Caitriona Balfe dating? The actors play the leads of the hit Starz TV show Outlander, and their chemistry has already gotten a lot of people talking about a possible real-life romance between the duo, even though there’s scant knowledge of their past relationships or dating status.

Both Sam and Caitriona are active on social media, but they’ve stayed mum on the topic of their love lives. Caitriona has admitted that she’s a single lady at the moment, after dating Radio4 guitarist Dave Milone for a long time. In an interview with the Independent, she joked, “A single lady right now and terribly depressed by it… joke. Had I been in a relationship, it would’ve been difficult to leave someone in LA. But I don’t worry about it too much. Leave that up to my mother.”

And People Magazine claims that Sam is also single, although we really don’t know much more than that. There’s no denying the pair’s on-screen and off-screen chemistry, which can only be described as ‘smolder, smolder, smolder’. They’re crazy hot on-screen, and they’ve sung nothing but praises for each other off-screen. But does that mean that they’re just really good friends and/or really good actors, or that they’re dating?

There’s another behind-the-scenes video that fans keep pointing towards, the Entertainment Weekly interview where Sam and Caitriona are asked to name the sexiest song on their playlist. They quickly joke back and forth, and Sam ends the exchange with, “I know, tell me about it…I share a trailer with you.”

Is that a joke? Was he serious? Again, it’s hard to tell, but many fans have already taken that as proof that they’re living together. I think that would be jumping the gun, considering that we know so little about the actors and so little about their private lives. They joke a LOT in interviews, so it could have just been a result of sleep deprivation and random humor.

In the end, what matters is that Outlander fans have found the perfect Claire and Jamie. The actors clearly get along, and whether they’re dating or not, their chemistry is fantastic and they truly bring their characters to life. If they are dating – well, good for them. They’re both hot and funny. If they’re not dating, then I feel bad for the people they do end up dating… they have a lot to live up to.