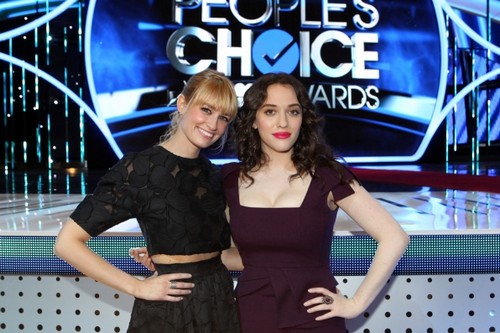 The 2014 People’s Choice Awards is taking place in Los Angeles on January 8, 2014. The award show is being broadcast live from the Nokia Theater on CBS at 9 p.m ET.  This year’s awards will be hosted by Kat Dennings and Beth Behrs from the CBS comedy 2 BROKE GIRLS.

Now in its 40th year, the People’s Choice Awards continues to be the only major awards show voted on entirely by the public for fan favorites in music, movies and television.  Every year, potential nominees are determined by national ratings averages, box-office grosses, music sales, social media presence and PeoplesChoice.com data, then vetted through EPoll Market Research.

Expected to attend the show tonight are Sandra Bullock, Justin Timberlake, Robert Downey Jr., Anna Faris, Nina Dobrev, Ian Somerhalder and Kaley Cuoco are many others.  Brad Paisley will be performing, along with Sarah Barielles and OneRepublic. And Justin Timberlake if everyone tweets enough.

So pop your popcorn, sit back in a comfy chair and get ready for our live recap of tonight’s show and all the good, the bad and the ugly fashion.

The 2014 People’s Choice Awards opens with a star-studded skit from our favorite Broke Girls featuring appearances from Ian Somerhalder, Sarah Michelle Gellar, the cast of Orange Is The New Black, Sharknado, Christina Aguilera, Kaley Cuoco, and many more.

Kat Dennings and Beth Behrs take the stage as our 2014 People’s Choice Awards.  Heidi Klum and Brad Paisley interrupt the awards ceremony to place orders for burgers and fries.  Since Kat and Beth are a little busy hosting, they bring out an army of waitresses dressed in their Two Broke Girls uniforms to serve the hungry celebrities in the audience.

Jessica Alba takes the stage next to hand out People’s Choice Favorite Music Album.  The nominees are: To Be Loved, Blurred Lines (Robin Thicke), Bangerz (Miley Cyrus), Based On A True Story (Blake Shelton), The 20/20 Experience (Justin Timberlake).

The People’s Choice for Favorite Album goes to: The 20/20 Experience by Justin Timberlake.

Up next is the Award for Favorite New Talk Show Host.  The nominees are Jenny McCarthy, Queen Latifah, Arsenio Hall, Bethenny Frankel, and Ross Matthews.

Intelligence stars Marg Helgenburger and Josh Holloway take the stage next to announce the winner of Favorite Network TV Drama, the nominees are: Nashville, Grey’s Anatomy, Chicago Fire, The Good Wife, and Parenthood.

The People’s Choice for Favorite Network TV Drama is: The Good Wife.

Miles Teller, Zac Efron, and Michael G. Jordon (stars of That Awkward Moment) take the stage next to announce the People’s Choice for Favorite Comedic Movie.  The nominees are: The Hangover III, The Heat, Instructions Not Included, We Are The Millers, and Grown Ups 2.

The People’s Choice Award for Favorite Comedic Movie goes to: The Heat.

Roma Downey takes the People’s Choice stage next to introduce Grammy Award Winner Brad Paisley, who will be performing his hit song “The Mona Lisa.”

After Beth Behr’s interesting rendition of Six Mix-A-Lot’s “Baby Got Back” Shemar Moore (Criminal Minds) and Malin Akerman (Trophy Wife) announce the People’s Choice Award for Favorite On-Screen Chemistry.  The nominees are Stana Katic and Nathan Fillion in Castle, Ian Somerhalder and Nina Dobrev in Vampire Diaries, Patrick Dempsey and Ellen Pompeo in Grey’s Anatomy, Chris Colfer and Darren Criss in Glee, Jennifer Morrison and Colin O’Donoghue in Once Upon A Time. 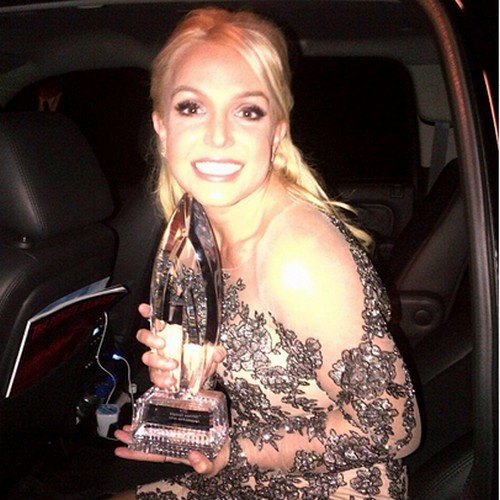 Lucy Hale (Pretty Little Liars) and Joseph Morgan (The Originals) take the People’s Choice Awards stage to introduce One Republic, they will be singing their hit song “Counting Stars” live.

The People’s Choice Humanitarian Award goes to Jennifer Hudson and her work with the Julian King Foundation.

Emily Deeschanel and Micheal Weatherly take the stage next to announce the People’s Choice for Favorite Actress in a New TV Show.  The nominees are: Anna Faris, Allison Janney, Rebel Wilson, and Sarah Michelle Gellar.

The People’s Choice For Favorite Actress In A New TV Series is: Sarah Michelle Gellar.

Matt LeBlanc will be announcing the People’s Choice for Favorite Network Comedy.  The nominees are: 2 Broke Girls, The Big Bang Theory, How I Met Your Mother, Modern Family, and Glee.

WE ARE UPDATING ALL EVENING SO MAKE SURE TO UPDATE OFTEN!