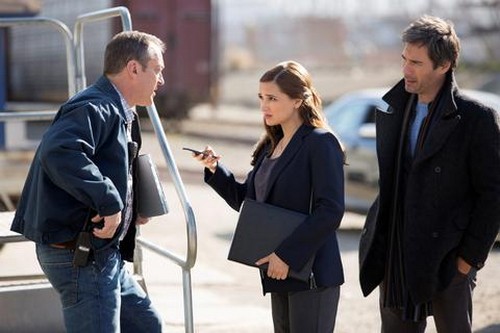 Tonight on TNT after the Fall hiatus PERCEPTION returns with its winter premiere called, “Curveball.” If you have never watched the show before in Perception, McCormack plays Dr. Daniel Pierce, an eccentric neuroscience professor with paranoid schizophrenia who is recruited by the FBI to help solve complex cases. Pierce has an intimate knowledge of human behavior and a masterful understanding of the way the mind works. He also has an uncanny ability to see patterns and look past people’s conscious emotions to see what lies beneath.

Pierce’s mind may be brilliant, but it’s also damaged. He struggles with hallucinations and paranoid delusions brought on by his schizophrenia. Oddly, Daniel considers some of his hallucinations to be a gift. They occasionally allow him to make connections that his conscious mind can’t yet process. At other times, the hallucinations become Daniel’s greatest curse, leading him to behave in irrational, potentially dangerous ways.

On tonight’s episode with the help of his hallucination, Hall of Famer Mordecai “Three Finger” Brown (guest star Brad Beyer), Pierce fights for an autistic teen under interrogation for murder. Meanwhile, Dean Haley turns on the charm in order to convince a neuroscience prodigy (guest star Kenny Ridwan) to attend CLMU.

Tonight’s Perception Season 2 Winter Premiere is going to be exciting, and you won’t want to miss it. So be sure to tune in for our live coverage of the new episode of Perception — tonight at 10PM EST! While you wait for our recap, hit the comments and let us know how excited you are about the show. Don’t forget to come back at 10PM for our LIVE recap!

Moretti and Donnie attempt to have lunch together, but she gets called away to a crime scene at the rail yard. Moretti is getting the update as she walks to an office area when she sees another detective questioning the potential murderer. Moretti takes over questioning.

Meanwhile Max gets stuck showing a prodigy around campus as Pierce sneaks out of the obligation to help when he sees Moretti show up for him. The boy who was questioned has serious mental issues and Moretti could not get through to him after the first detective scared him. At the station, Pierce meets the boy and tries to get into his mind by starting to ask some questions. He starts to share some information about his past but quickly gets too agitated to talk.

Pierce shares information with Moretti and Probert the disorder the boy has. He shares that he didn’t intend to kill the victim, a security guard. Pierce goes to see Ryan to plead the boy’s case. Ryan reminds Pierce that the boy stole a train and killed someone. Ryan leaves Pierce with the only true defense that may get the boy out of the murder charges. Pierce seems excited for the challenge and goes to see the boy again with Moretti. They feel like they are not getting much because he is calling out the train patterns which meant nothing to them, They go to the rail yard again and are able to find out that the boy actually knew the exact patterns and knew about a potential problem that could have happened. Better than veteran conductors, he could foresee the problem and the reason he broke in that night was to try to divert the train that was headed for disaster.

Pierce and Moretti visit the home of the victim and asked if he had any enemies. His mom shares that he came home a few weeks ago beat up by a bookie who he owed money to. Moretti questions the bookie and finds out that he did not kill the victim over the money. The victim told him he’d have the money-his brother was getting it for him.

Moretti breaks Pierce from the hallucination he is having about Hall of Famer Mordecai “Three Finger” Brown when she comes in and tells him that there may be a brother in the picture. As they discuss it more, Pierce recalls a picture in a baseball magazine that is an exact match to Henry. The picture is of a man who has just been signed to a baseball team. As Pierce and Moretti head out, Dean Haley arrives with a plan for the prodigy he is wooing to have dinner at Pierce’s house with him. Max was left in charge of the young boy and allowed him out of his watch for a while, and after the Dean calls him to retrieve the boy, he finds him high in the dorms.

During an interview the brother, he confirms he was planning to pay off the bookie. At dinner at the house as they wait for Pierce to return, Eli, the young prodigy, tells his mom that he is high from the marijuana that he got under Max’s watch. The Dean is completely freaking out, the mom begins to leave, and all hell is breaking loose. The mother decides to stay as the Dean is reassuring her, and it is realized that the mom has a thing for Dean Haley.

Pierce’s hallucination leads him back to Andre, the accused murderer, asking how many Henry’s he saw that night. The tip he received from his Hall of Famer hallucination turns out to be worth gold because Andre confirms there were two henrys that night…so Pierce believes Henry killed twin Micah and is now impersonating him since he was always jealous of him. He shares his deduction with Moretti and Ryan. They are trying to determine how to prove this theory when Pierce remembers that Micah had broken his wrist. He goes to see “Micah” to find out if he had a recent wrist injury. They force him to get an xray but it turns out this Micah did have a broken wrist.

After another hallucination leads Pierce to looking for consistencies in superstitions that baseball players stick to, they review video with “Micah” and notice he taps his helmet before each time he bats. In the more recent videos he does not. They confront him with their accusation. He finally realizes he is back into a corner and Henry admits he has been impersonating Micah after killing him. He describes everything that happened in detail but claims it was an accident.

Later, we see Max walking with Eli and he asks Eli if he plans to attend the university. He says no way, not after the Dean stole his mom away. At the station, Ryan feels like he is pushing Moretti since she keeps cancelling their plans. He leaves her with the final words, “You have my number.”