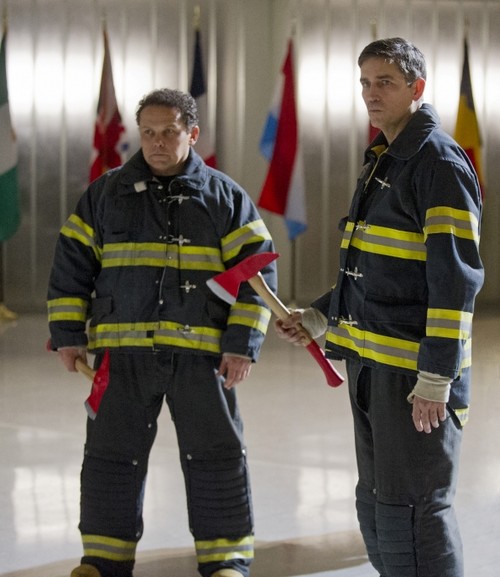 PERSON OF INTEREST returns to CBS tonight for another exciting episode.  In “Allegiance” the team gets involved in a case of international politics when a former government contractor stalks a U.N. diplomat. Meanwhile, an adversary tries to take advantage of Root.

On last week’s episode of PERSON OF INTEREST  the Machine tasked Root to find a janitor who had a mysterious past. However, when her presence endangered him, the Machine sent his number to Finch as well.

On tonight’s episode Finch and Reese must delve into the murky waters of international politics when they are given the number of a former government contractor who is stalking a UN diplomat. Also, an enemy attempts to gain an upper hand on Root.

Tonight’s PERSON OF INTEREST Season 3 Episode 18 is going to be exciting, and you won’t want to miss it. So be sure to tune in for our live coverage of the new episode — tonight at 9 PM EST! While you wait for our recap, hit the comments and let us know how excited you are about the show.  Don’t forget to come back at 9 PM for our LIVE recap!

In the words of Shaw, “surveillance is the last stage of planning before an attack” and that’s why Shaw believes their newest number could be a terrorist. Shaw caught Maria Martinez taking pictures of a diplomat outside the U.N. That was suspicious alone, but to then see Maria plant a tracking device could only mean that she’s up to something.

It doesn’t seem like much but Shaw’s not just throwing out random theories – Maria does have all the trappings of a terrorist. From her secretive conversations to the mysterious package she was caught picking up anyone would think she was a terrorist. And that’s why the team can’t understand why the Machine would even give them Maria’s number.

Is it getting a little bit wonky after hanging with Root for so long? Because surely Maria can’t be innocent. Shaw kept on following Maria and at one point was close to intervening when she learned that Maria, in actuality, wanted to plead with the man and not kill him as part of a bigger plan.

Maria has a friend lying in detention waiting to be deported all because he was accused of being a terrorist. But she doesn’t think her friend is a terrorist. She knows him too well to know that he isn’t capable of something like that.

She met Omar when he had acted an interpreter for her while she was working in Iraq. And from there they slowly fell in love so Maria isn’t really going to give up on clearing Omar’s name. It’s not a whim and sadly for her this turns out to put her own life in danger. Maria was trying to stop Omar extradition because he would have been killed if he ever returned to his homeland, but she hadn’t realized that whoever was pushing for Omar to die would also want to get rid of her.

Shaw, Fusco, and Reece were forced into stepping in after men from and international Legion attempted to kidnap and/or Maria.

It led to Maria meeting the team. She told them about Omar and how she knew he was innocent. Something they proved themselves when Finch went in undercover as Omar’s lawyer.

Omar isn’t a terrorist and the only reason why he’s being suspected of being one is because he knows too much. When he was last in Iraq he signed off on some generators. That’s why Maria was also there – her boss wanted her to oversee these new generators. Although what she hadn’t known that her boss was also pretty shady. He stole the generators and resold it to somewhere in Turkey.

That was underhanded dealings and even put his co-workers lives at risk. But her boss didn’t care as long as the problems stayed overseas. So when Maria asked her boss for a recommendation for Omar’s asylum she unknowingly alerted him to a problem.

Furthermore, she let it be known wasn’t going to give up and she isn’t – Maria was supposed to stay with Shaw at the safe house, but she escaped. Once she learned that her boss was behind all of this and that he had even forged a letter from the Iraqi government in order to deport her boyfriend then she knew she couldn’t just sit back and do nothing.

She walked right into danger at the same time Reece was recuing her boyfriend. How fair is that? Now they have to go and recuse her when she could have simply waited for Omar and then they could have gone underground together.

Still, Maria thought she had a friend on the inside. It was a new friend and to be honest she shouldn’t have trusted him, but she did anyways. He got her inside of the U.N and she was able to get the proof she needed to clear Omar. Though it won’t mean her much good. The only reason why this friend let her in was to find and destroy the evidence that could link him and her boss back to their dealings in Iraq.

He was seconds away from killing her when the guys or better yet Fusco, who happens to be really good at an old fashioned fist fight, stopped him. They got Maria out of there along with evidence of her boss’s treachery.

So in a way it worked out best. With his name in the clear, Omar was finally able to gain sanctuary and his romance with Maria actually softened up Shaw’s generally cold cold heart. Her mother had escaped Iran during their early 80s and if someone had protected her like the way Omar did with Maria back in Iraq then Shaw wouldn’t have been born.

Root came back for a short while, but she failed at her mission and unless she gains the upper hand then it looks the “Samaritan” will be up and running in a matter of months. She has to kill the leader of Decima or pretty soon he’s going to kill her and the rest of the team. And then it won’t matter what sacrifices were made in Iran!