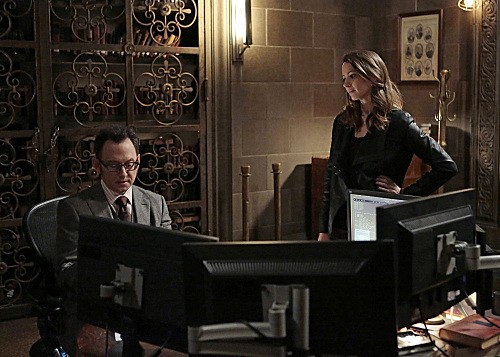 PERSON OF INTEREST returns to CBS tonight for another exciting episode.  In “Most Likely To…” Reese and Shaw go undercover at a high-school reunion to keep tabs on the latest POI. Meanwhile, Finch and Fusco head to Washington, D.C., to investigate the motivations behind a recent attack.

On last week’s episode Finch and Reese has to delve into the murky waters of international politics when they were given the number of a former government contractor who was stalking a UN diplomat. Also, an enemy attempted to gain an upper hand on Root.

On tonight’s episode Reese and Shaw pose as alumni at a high school reunion in order to keep eyes on the latest POI. Meanwhile, Finch and Fusco travel to Washington, D.C., to investigate the motivations behind Vigilance’s latest attack.

Tonight’s PERSON OF INTEREST Season 3 Episode 19 is going to be exciting, and you won’t want to miss it. So be sure to tune in for our live coverage of the new episode — tonight at 9 PM EST! While you wait for our recap, hit the comments and let us know how excited you are about the show.  Don’t forget to come back at 9 PM for our LIVE recap!

It doesn’t happen most of the time, but the team will occasionally fail in their mission to protect their number. They failed to save the life of Leon Wainwright. She was a federal worker in town for a Broadway show when her seemingly nice New York cabbie chose to blow up the car.

Reece and Shaw were nearby and yet they couldn’t make in time to save her. What they did managed to save was the cab driver’s cell phone. He working with Vigilance when he killed Leona and himself and the team wants to know why. However its Finch and Fusco that are going to be the ones that investigate the Vigilance lead while Reece and Shaw have been put on a new number.

They have to follow Matthew Reed, a Manhattan prosecutor, who happens to be traveling to Westchester for his 20 year reunion. They considered it a punishment especially after they found out that as part of their assignment they have to pretend to be returnees living up their glory days. Which is insulting no matter how Finch tries to spin it – he gave Shaw the identity of an overweight, glasses wearing, and frizzy hair nerd.

Luckily everyone at the reunion is amazed at “Betty” transformation. And the only one left having a hard time was Reece. The guy he was pretending to be was a bit of a lothario back in the day and a lot of women have held on to their 20 year long grudges.  Reece ended up getting slapped at least three times by three different women.

Although it would probably help for Reece to hear that Finch and Fusco were caught off guard as well. They went to Leona’s office to investigate and found it was stripped bare by Control. Control had put Leona in charge of security clearances and they don’t want anyone (including Vigilance) to get their hands on what they’ve been hiding.

Control seized all the physical files from her office, but Finch knows that what they’re looking for is most likely backed up somewhere. All it would take is just a little hacking.

If only it could have been that easy. Finch and Fusco got what they needed and also found themselves surrounded by Vigilance. The privacy terrorists have been watching them for a while now and they caught on to the fact that Finch and his people know about crimes even before they happen. So they want more than just the file Control was trying to hide. They also want Finch’s assistance!

Back at the reunion, Shaw and Reece figured out why Matthew’s number came up. He was accused of killing his girlfriend back in high school and many of his classmates continue to believe he did it.

That’s why someone was torturing him by releasing crime scene photos of the young woman’s death and they put the same drug she allegedly overdosed on into all of the goodie bags. Someone was trying to push her murder into doing something reckless, but in a very nice twist – it turns out that Matthew was behind all the stunts.

He knew he didn’t kill his girlfriend and he had pretty good idea on who did. She had a best friend. He was a platonic friend with no chance of ever being something more. And after her “overdose”, Doug played up the part of a grieving friend very well. That is until Matthew confronted him.

Matthew wanted to push Doug in front of everyone so when the time came for him to kill the other man it would all look like a suicide. But Shaw, Reece, and some party crashers they didn’t even know they had stopped Matthew who deep really was a good man.

Root saved Finch and Fusco from Vigilance and she only succeeded because she had made the opposition stretch out their man power. Which is why she gave them Reece and Shaw’s location. Most of Vigilance’s men arrived at the reunion ready to kill the well-known highly skilled ex-agents while thinking the computer nerd and the cop would be easy pickings.

They weren’t and that’s all down to Root’s assistance.

Matthew and even Doug found themselves trapped in a shoot-out that had nothing to do with them. And though Reece and Shaw got them out safely –it won’t mean anything to the guys in the long run. Doug will go to jail for what he did, but Matthew might end up there as well. Remember he did plan on killing Doug and he went as far to plant pharmaceuticals so odds are he’s looking at 5 or maybe a 20 year sentencing.

Not that Matthew is letting a small thing like his bleak future stop him from flirting with Shaw. They shared a connection on this mission (despite her faking who she was and what she did) and he’s willing to pursue it. All she has to do is agree.

Shaw walked away with her life looking brighter and now if all their days could end that way. The main operator at Vigilance was able to escape Root and he released the file Control was so desperate to hide. He gave it to the media and they put so much on the government afterwards that Control was forced to shut down operations. But she’s not finished fighting quite yet. Now that Vigilance has a struck a blow; they’ll soon find out what it means to lose something.

Control put out a kill order on Vigilance’s leader!