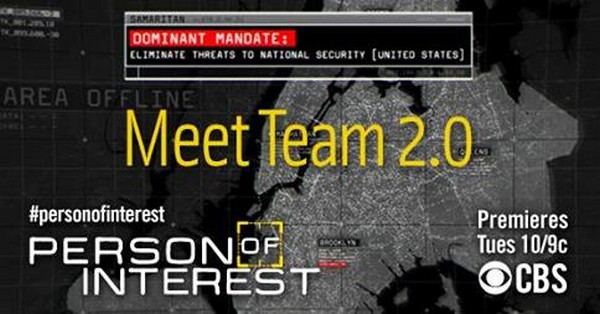 Tonight on CBS Person of Interest returns with an all new Tuesday September 23, season 4 premiere called, “Panopticon.” On tonight’s episode the fourth season opens with Finch, Reese, Shaw and Root adapting to the new identities created to protect them from Samaritan. Meanwhile, the Machine continues to send out numbers, potentially putting the entire group in danger of detection.

For those of you who are not familiar with the show, Person of Interest is an American crime drama television series broadcasting on CBS. It is based on a screenplay developed by Jonathan Nolan. The series revolves around a former CIA officer (Jim Caviezel) recruited by a mysterious billionaire (Michael Emerson) to prevent violent crimes in New York City.

On tonight’s episode forced to take on new identities created by Root, the team tries to adapt to their new lives. However, some find it hard to ignore The Machine’s numbers, which puts them all at risk of being detected by Samaritan.

Samantha Shaw is deep undercover, and working at a mall spraying women with perfume samples. Root pays her a visit at the all, and Sam demands to know why the machine gave her such a horrible day job. Root doesn’t want to hear it, she came for a makeover for her new job interview.

Meanwhile, John is apparently moonlighting as a drug dealer. He meets a group of goons underneath a bridge to make a buy, and they try to rob him but he overpowers all of them. The police arrive, and it turns out that John is actually an undercover police officer in the Bronx. Harold Finch’s alias is Professor Whistler, he’s teaching a college class on frequencies, and literally is putting his six students to sleep. After his class, the dean pays him a visit and tells him that he can’t bring his dog on campus and they are moving his class to a smaller room since no one has signed up.

John, Sam, and Harold all receive a text on their cell phones instructing them to go to a meeting at an address in ninety minutes. It turns out to be a lecture on how to “look at the positivity in life.” Sam and John are bored and slip out of the lecture early. A payphone in the hallway starts ringing right next to them, John answers and receives a message and writes it down. He tells Sam that they are “back in business.”

John meets up with Harold at the park and tells him that they “need to get back to work.” Harold says that he is done taking instructions from a computer, and he made that clear after the computer instructed them to kill a congressman. Harold insists that they are ill-equipped to take down Sumaritan, they have no resources, and the library is gone. Harold leaves his dog “bear” with John and says that he will be happier with him and leaves.

John tracks down a computer store owner named Ali Hasan, he watches from outside the building in his car. A drug dealer storms in and wants to know why he told the police about their burner phones, and he gives him his phone and says the boss wants him to set up a new network ASAP, he has 48 hours. Ali argues that he can’t get involved, but he threatens his son.

John heads in to the store, and shows Ali a picture of his murder victim, and his badge, and asks if he came in to buy a pair of wire clippers. John warns him that he is involved with bad guys, but Hasan doesn’t talk. Felix runs a gang called the Brotherhood, and he is forcing Ali to set up a network for him. John watches Ali meet up with Felix in Times Square and hand him over a new phone.

John starts making his move to take down Felix, and realizes that Hasan is sending a text to the phone he just gave Felix. He puts two and two together and realizes that Hasan isn’t the victim, he’s the perpetrator, and the phone he just gave Felix is a bomb. John chases down Felix in his moving car and reaches in the window and punches him in the head and takes the bomb phone out of his hand and throws it across the street as it blows up.

John and his partner bring Hasan in for questioning, they offer to help him against the Brotherhood, but he needs to cooperate. Hasan argues that he came to the police once, and they wouldn’t help him, so he had to protect himself and his family with the bomb. He reveals that they threatened his son Ben, and John rushes to the store to make sure that Ben is safe, but he is already missing. Hasan receives a phone call from the Brotherhood, they say that they have Ben and if he doesn’t get the network up and running by midnight, then Ben is dead.

John reassures Ali Hasan that they will save his son, and he calls Sam for back-up. Sam argues that if they blow their cover then they will be taken down by the machine. John says he doesn’t care, they have a chance to save someone. He hangs up on Sam and heads to the Brotherhood’s headquarters. He shots a smoke bomb and then marches in and begins taking down the members. While he is demanding information about Ben, Sam waltzes in.

Root pays Harold a visit in his office at the school, she warns him that Sam and John are out of control and have blown their cover. She pleads with him to get involved and help them before they all end up dead. She warns him that this is war, and the machine has a plan, but she needs him to sit up and pay attention.

Ali Hasan is trying desperately to get the network up and running for the Brotherhood, but he’s having some connectivity issues. Harold arrives and says that he “can be of assistance” and he knows a thing or two about networks, John is relieved to see he is on board. Ali shows Harold that he has run the network through all five boroughs via old TV antennae’s.

John pays Carl a visit and fills him in on the Brotherhood and the network has to be set up before “The Whale” arrives or they will kill Ben. Carl reveals that “The Whale” is the largest heroin shipment to hit NY, it comes once a year and is cut and divided in a protected house. Meanwhile, Harold and Ali get the network up and running. Ali calls the Brotherhood and tells them that the network is up and he needs hi son back. They tell him that they are in the middle of something, and he needs to “sit tight and wait.” Harold is able to track down where the Brotherhood are after they tap in to the network, and send the address to John so that he can go rescue Ben.

While John is following the Brotherhood in the SUV, they are t-boned by a tractor trailer. Sam and John watch from a distance and think it is just a routine traffic accident. But, the driver of the truck walks over to the SUV and takes their phone and says “Alias said hello.”

John storms in to the house that the SUV came from, and chaos ensues, all of the drug dealers and the women packaging the heroin begin running around frantically. John manages to track down Ben as the men are throwing them in to a car and rescues him. John calls Ali and puts Ben on the phone so that he knows he is safe.

A woman named Meg Watkins from Homeland Security arrives a demands to know what is going on. A cop on duty informs her it was just a drug war, she says “I don’t think so” and walks to her car.

Root visits Sam at the mall and tells her that she needs to check her calendar because she has a coffee date. Sam argues that she doesn’t want the machine to come anywhere near her love life, and Root reminds her that the machine has a reason for everything. Harold heads back to his office and realizes that the Dean circled a bunch of letters on his thesis, which translate to the name of a book. He heads to the library and checks out the book. Shaw gets dressed for her coffee date, and a man named Romeo pulls up in a black van and says that they need a “good wheel man” and asks her if she is interested. She says “Absolutely” and hops in the car with him. Harold follows a map he found in the book he checked out in to a dark underground tunnel and gasps at what he sees…