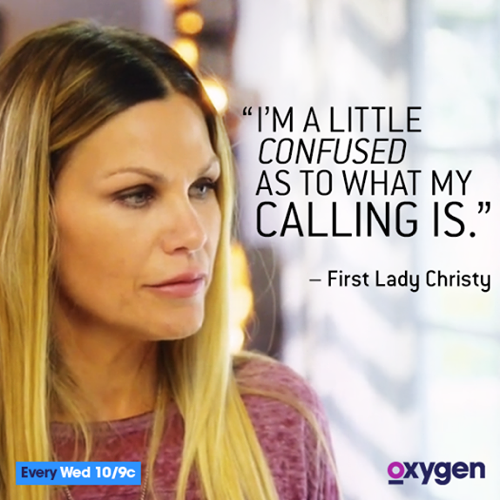 Preachers of L.A. returns this evening with an all new Tuesday October 22, season 2 episode 10 called “Bouncing Back”. On tonight’s episode season 13 opens with an all-star cast of “bad girls” Deitrick reaches out to fellow gospel artist Kevin Terry; Christy Haizlip does some soul-searching.

For those of you not familiar with the show, Preachers of L.A.is about the lives of six pastors in Southern California are documented in this reality series. The program casts light on their work in the community; their daily highs and lows as men, husbands, fathers and friends; and the women who support them.

On the last episode, Pastor Chaney and Myesha expanded their Saved, Sanctified and Sexual conference.

On tonight’s episode Deitrick tries to help a fellow gospel artist who fell from grace. Meanwhile, Myesha addresses a serious issue at her conference, and Christy delves into some self-examination.

Tonight’s episode of Preachers of L.A. is going to be filled with drama and you won’t want to miss it, so be sure to tune in for our live coverage of the show tonight at 10 PM EST!

Deitrick meets up with Michelle for advice. He asks her if he should help out Kevin Terry, a gospel singer who has fallen from grace to due a sex tape scandal, despite the fact that many other people are afraid to associate with him. He says he feels that someone should reach a hand out to help him back up. “I think it’s only right that somebody extends love to him,” Michelle agrees.

Christy tells Jay about how a lot of people want her to come and preach as a guest speaker at their events. She doesn’t know if being a preacher is what she wants because she hasn’t had time to focus on what she wants due to having to raise the kids and fulfill her role in the family. Jay says he wants to support her in finding out who she wants to be.

Myesha meets with Rachel, a member of her church and an advocate for sex education and women’s rights. Rachel will be speaking at the Hiding Behind the Lipstick charity event, which allows women to speak up about problems in their lives. Myesha says they’re going to go into strip clubs to talk to women.

Deitrick is in D.C. to meet with Kevin Terry to see what his life has been like since the sex scandal and how they can move forward. He tells Terry how appalled and sickened he was with how no one came to his defense or supported him after the incident. Kevin reveals that after the incident, he received death threats. Though he doesn’t think Kevin’s mistakes are okay, he wants him to be able to move forward.

After the incident, Terry’s productivity was crippled such that he has had to go back to working a regular job despite still having his choir.

Deitrick says he needs to meet and hear Kevin’s choir, and Kevin says he’d be honored.

Christy and her spiritual advisor and friend, Priscilla, meet to talk about her trepidation about preaching. She talks about how she’s not getting any younger and isn’t yet old, and needs to figure out where she’s going next. Christy asks how people would perceive her going into the fashion industry. Priscilla says to look into it and see what happens.

Myesha and Rachel head to a strip club to find girls to recruit for their event. No girls are there, so they talk to the bartender, Lisa. At first, Lisa thinks they’re looking for girls for a bachelor party or something. Myesha describes her mission and Hiding Behind the Lipstick. Lisa talks about how girls come to the strip club because they’ve had struggles in life and know they can make money and be accepted at the club. Also, she talks about difficulty in getting a regular job due to issues with having a criminal record. Lisa is moved by the conversation and says it must have been meant to be and she will be at the event.

Deitrick stops by Kevin Terry’s choir rehearsal as promised to show that they have his support and that restoration and redemption are possible. One of the singers talks about how someone told her that she shouldn’t be associated with his choir, and how she went to him and told him she has his back because everyone has his own struggle and no one should judge. She says the choir is medicine. Deitrick realizes that this choir is full of people who truly support Kevin, which is something he really needs to recover.

At the Hiding Behind the Lipstick event, Myesha and Rachel hope Lisa will actually come. “I’m really worried ‘cause I haven’t seen Lisa yet,” Myesha says. “I hope she didn’t get scared and decide not to come to the event.”

As women come onto the stage and reveal their secrets on white poster boards, Myesha looks around for Lisa and doesn’t see her. She wonders if she was naive to think she should help strippers.

As Rachel tells her story of abuse of all kinds and being forced into prostitution, Lisa arrives at the event with another woman.

Myesha and Rachel meet with Lisa and her friend afterward. Her friend says she’s coming back for sure.

Deitrick Facetimes with his wife, Dominique, and his babies. He tells her about Kevin Terry, and how he has a real gift for writing choir music and directing. He says the choir already sounds like a recording choir. He feels that he will be fulfilling God’s will by helping this guy. Dominique suggests that he give them a recording deal.

Jay and Christy get away for a dinner date. Christy is still confused as to what her calling is, and still unsure if she should be a preacher. She tells Jay that she’s at a crossroads in her life. She will either pursue something for herself and the family or step over a line into evangelism, and says after she chooses, there will be no going back. “The main thing I want is I want to make sure that you are doing what God wants you to do,” Jay says. “And that’s what’s important to me.” Christy agrees.

Deitrick brings a record executive to see Kevin’s choir give a showcase. He loves the performance and announces that he is going to go back to the label and see what he can do. Deitrick is thankful for Dominique’s help and the blessings he has received. He’s happy that he was able to help Kevin.