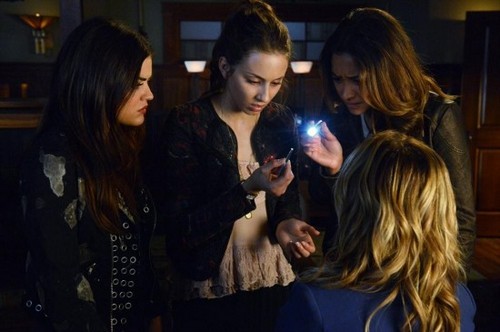 Tonight on the ABC Family PRETTY LITTLE LIARS continues with the 17th episode called, “Bite Your Tongue.” On tonight’s show “A” takes the game up a notch as the PLLs get closer to finding out their identity.  Did you watch the last episode?  We did and we recapped it here for you.

On last week’s episode Shana returnd to Ravenswood to tell Emily that she had a message from Ali, but could Emily and the girls trusted Shana with all that they know about her? And when Shana upped the stakes and said that Ali wants to meet Emily – and only Emily – could it all be part of an “A” plan, or was Emily really Alison’s favorite? With Emily becoming more hopeful by the minute, Spencer was determined to not let her friend get hurt.   Meanwhile, Aria and Hanna dealt with matters of the heart.

On tonight’s episode Hanna’s new interest in crime novels helps her to come up with a plan to try and figure out whose body is in Ali’s grave. While Hanna is on her hunt, Spencer is working overtime to decipher the stories in Ali’s diary which she hopes will reveal the identity of Ali’s mystery man. But with both girls hot on the trail, will their work lead them straight into “A’s” path?  Meanwhile, Aria is upset with the new friend Mike has made and Emily’s dad is concerned about her behavior.

Pretty Little Liars Episode 4.17 “Bite Your Tongue” opens with Aria and Emily heading home after a night of the movies.  Emily is still bitter that Spencer crashed her secret meeting with Alison.  Aria and Emily head back to Aria’s house, and realizes her little brother Mike Montgomery is having a wild party.  Byron, their Dad, left Aria in charge for the weekend, she orders Mike to send all of his friends home.

Meanwhile Spencer is still trying to decipher the pictures she took of Alison’s diary pages.  Spencer is determined to figure out who the mystery boy was that Alison was dating.  Hanna is in sleuth mode too, she has been reading true crime novels by an author called James Patterson.  She is dead set on figuring out who the body was that was in Ali’s grave, since it obviously wasn’t Ali’s body.

Emily and Aria head upstairs to Aria’s bedroom, and find Mona standing in her room.  Mona says Mike invited her to his party, and she was just looking for the bathroom.  Aria promptly kicks her out.  The next day Aria gives Mike the third degree, she wants to know why he is hanging out with Mona.  She reminds him that Mona tried to destroy her family, but Mike doesn’t want to hear it.

Emily’s Dad took her car to the shop to try to find out why it randomly shut off when they were in the woods.  The mechanic told him there is nothing wrong with Emily’s car and it was just a computer glitch.  Emily’s not buying it though, she decides to just take her bike to school.  Her Dad is worried about her, he thinks she is obviously still shaken up about the car that drove through their living room and nearly killed her Mom.

Maggie is back in Rosewood, she has come back to handle her lease and ship some boxes back to Seattle.  She pays Ezra a visit at school, and he is furious that she didn’t bring Malcolm with her.  Aria crashes their meeting, and Maggie leaves.  Ezra tells Aria that “People get what they deserve…eventually”

Hanna hits the book store to buy more crime novels.  Det. Holbrooke runs into her, and he apologizes for everything he took her and her Mom through, while he was investigating Wilden’s death.

Hanna heads to school, and tries to talk to Emily.  Emily confides in her that she thinks “A” turned her car off in the woods.  Spencer tries to join their party, but Emily gives her the cold shoulder.

Aria catches Mona and her brother Mike holding hands in the quad.  She approaches Mona, and learns that Mike and Mona met through their mutual counselor Jesse.  She has no intention of leaving Mike alone, she tells Aria to “suck it up.”

Spencer runs into Andrew at the copy machine, and he reminds her that they have a physics test, which she completely forgot about.  Andrew confesses that he has “been up all night cramming.”  Spencer tells Andrew to “cover for her” at the test, and invites him over after school to share his Physics notes.

Mona pays Ezra a visit in his classroom, and he tells her to “close the door.”

Hanna is at The Brew, reading her book that Holbrooke told her to buy.  Holbrooke is at the Brew also, and he is happy to see Hanna is reading the book he told her to.  She asks him for “hint,” and Holbrooke tells her “the dental records, it always comes down to teeth.”

Aria visits the new guidance counselor Jesse at Rosewood High, she wants to know about Mike’s counseling group.  She tells Jesse that Mona “is the devil” and she would appreciate it he stopped encouraging them to meet together.  Jesse thinks Aria should join the group herself.

Ezra is in his classroom texting a message, “There’s been a setback, re: Alison.”  Emily’s Dad walks into his classroom, he wants to discuss Emily.  He confides in Ezra that Emily stayed at Mrs. DiLaurentis’ house and “it took a toll on her,” because Alison’s Mom thinks that Ali is still alive.  He wants Ezra to help get Emily “back on track.”

Andrew and Spencer meet up at her house after school, so he can help her study for the physics test.  He confesses that he studied “seven hours in a row.”  Spencer doesn’t want to talk about Physics though.  She wants some of Andrew’s “study aid,” so that she can “stay up for a while.”  Andrew says he has a “legit prescription,” and he will “give her a few to get through the week.”

Emily is tossing and turning in her bed, and she hears a noise.  She climbs out of bed and heads to her bedroom window to investigate.  Someone is outside her bedroom door, so she pulls out a pair of scissors.  Her Dad walks into her bedroom, and she tries to stab him with the scissors, but he manages to dodge it.

Spencer is still trying to decipher Alison’s diary.  The mystery boy used to take her to a college bar called the Hart And The Huntsman, he was much older than her, and used to eat boysenberry pie.  They used to meet up and discuss literature and writing.

Spencer rushes over to Hanna’s house to try to convince her to go to the Hollis pub after school tomorrow.  Hanna can’t go though, she is going to the dentist tomorrow.  She thinks “A” switched Ali’s dental records, and she wants to snoop around the files and see if there are any clues.

Aria runs into Maggie, and threatens her.  Maggie accuses Aria of “sleeping with her teacher to maintain her GPA.”  Aria grabs Maggie, and makes drop her box of Malcolm’s stuff.  Aria runs off.  She fills Emily in on the details of her and Maggie, and Emily confesses that she tried to stab her Dad last night.  As they are heading into school, they run into Mona and Mike making out.

Spencer heads to the Hart and the Huntsman pub, and runs into Ezra Fitz.  He is sitting at a table by himself eating a piece of boysenberry pie.  When he sees Spencer he acts suspicious, and rushes out.

Aria is at the Brew, leaving Ezra a voicemail about how sorry she is for harassing Maggie.

Hanna is at the dentist office, hiding in the file room.  She is stealing the visitor logs from around the time Alison disappeared.

Aria runs into the counselor Jesse at the Brew, he asks her if she plans on joining their group, and she declines.  He reminds her he is always available for a 1-on-1 meeting.  Aria confesses she is scared that she is “going to lose her brother.”

Hanna is still snooping around the dentist office, she lays back down in her chair, and the dentist comes in.  They never show the dentist’s face, he just puts the mask on her and knocks her out.

At the pub, Spencer is sitting at Ezra’s table, rereading Alison’s diary.  She realizes that Ezra was the older guy that Alison was seeing, and the beer that Ezra ordered was called “Board Shorts Ale.”

Emily is at school, after hours, using the copy machine.  She is supposed to be helping Ezra co-direct the school play.  She hears a noise and rushes back to his class room to leave the copies on his desk.  While she is in the room, the door slams shut.  Loud music begins playing on the loud speaker, and there is a sign that says “Act Normal, Bitch.”  Emily runs back in the copy room and locks the door, and pushes the desk against the door.  She sees her Dad pull in the parking lot through the window, but he can’t get inside, the door is locked.  Meanwhile “A” is beating on the copy room door and trying to get in.  Her Dad sees her in the window, and scales the side of the school.  He pulls her out the window and they climb down, just as “A” makes it into the copy room.  Emily thinks they are in the clear, but then her Dad drops to the ground clutching his chest.

Hanna wakes up in the dentist chair in the middle of the night, her mouth is bloody, and she is confused and disoriented.

At the school the ambulance has arrived for Emily’s father.  Emily feels guilty that her Dad got hurt helping her.  But, he confesses that there is something wrong with his heart, it is stress related, he has already been to the doctor.

Emily heads to Aria’s house for the night, while her Dad sleeps in the hospital.  Spencer shows up at Aria’s house, followed by Hanna.  Hanna tells them that she thinks “A was her dentist.”  They examine Hanna’s mouth and realize that “A” left a note in her tooth.  It says “I told you, dead girls can’t smile.  Stop looking-A.”

Meanwhile “A” is shredding the dental records he stole from Hanna while she was knocked out.