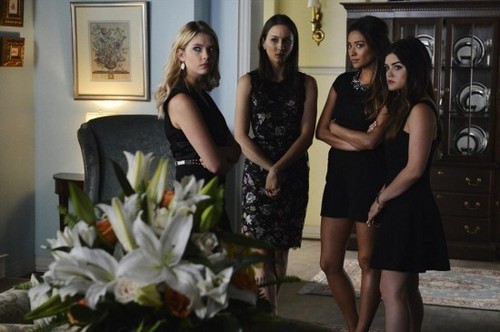 Pretty Little Liars returns to ABC Family tonight for the third episode of season five. Tonight’s episode is called “Surfing the Aftershocks.” On tonight’s episode Alison has trouble dealing with her mom’s death, and her friends must go along with her newest lie. Meanwhile, Spencer and Emily try to piece together info about Jason; and Hanna questions her own identity in the wake of Alison’s return.

On the last episode, with the events of New York behind them and back in Rosewood, the Liars were unsettled to still be living under a cloud of secrets. Aria was haunted by the recent past events, while Emily, Hanna and Spencer tried to wrap their head around the new normal. Alison, on the other hand, was still sleeping with one eye open as she was forced to stay at home with her family – who she doesn’t trust. Did you watch the last episode? If you missed it we have a full and detailed recap, right here for you.

On tonight’s episode now being forced to live through Ali’s latest lie, Aria, Emily, Hanna and Spencer try to cover their tracks, while simultaneously trying to piece together what happened in New York. Hanna and Aria have to close loose ends with the two people who know the truth about Ali’s story – Mona and Ezra. Spencer and Emily try to find out the truth about Jason and his whereabouts the night they were in New York.

The third episode of season five’s PRETTY LITTLE LIARS is going to be really exciting and we’ll be recapping it for you right here. In the meantime hit up the comments and tell us who you think is really A!

Tonight’s episode of Pretty Little Liars kicks off with Alison laying in her room for days on end, refusing to talk to anyone. The day of Mrs. Dilaurentis’s funeral arrives, Hanna offers to help Alison get dressed but she tells her to go down stairs and she will be down in a minute.

Downstairs, Kenneth is lecturing Jason; he tells him there better not be any cops or press. Alison comes downstairs in a black dress, and Kenneth flips out on her and tells her to go change. Alison cries that she just wants to wear her mom’s dress. After Kenneth and Jason storm out, Spencer explains to Alison that the dress she is wearing is the same one that Mrs. DiLaurentis wore to her funeral.

The next day, Spencer, Aria, Emily, and Hanna head back to Rosewood High. They sit down with the principal and he asks that they keep the disruptions to a minimum. They head to class and Emily wishes that they never came back to school. They are worried about Mona, Noel, or Ezra may blab to the police that Alison wasn’t really kidnapped. Hanna and Emily are convinced that Jason killed his Mom and is the same person that hit Alison over the head. Spencer refuses to believe it.

Mona tracks down Aria and wants her to sign a get well card for Ezra. Aria is shocked to hear that Ezra is back in Rosewood and recuperating. Emily runs into Paige in the hallwa and tries to tell her she’s sorry about what happened to Alison. Emily blows her off. She heads to her locker and finds a girl staring at her; she calls her out and asks her why she is following her. The girl introduces herself as Sidney and says she is on the swim team and recognizes Emily from her trophies. She asks her to watch her in the pool and give her a few pointers, even though she isn’t on the team anymore.

Spencer is watching the DiLaurentis house out the window, and Melissa teases her that they might throw a rock at her if they catch her. Spencer asks Melissa if she thinks Jason killed his mom, and Melissa does. Melissa threatens Spencer to stay away from the DiLaurentis family and says she wishes Spencer left Alison where she found her.

After school, Hanna gives Alison a ride to the funeral home; the director asked her to come pick up the visitation book from the funeral. Alison sees a painting on the wall of a woman in water and runs in to the bathroom. The funeral director comes in and mistakens Hanna for Alison. Alison jokes that it used to be a lot easier to tell them apart. Hanna has a flashback to her Hefty Hanna days; two months after Alison went missing Mona took her under her wing and told her she would teach her the secret to being unforgettable.

Spencer’s Dad catches her looking at the hole in the backyard where Mrs. Dilaurentis was buried. Spencer’s Dad says they are thinking about selling the house. Regardless of whether or not they move out, he says they are done with the DiLaurentis family. Spencer tries to remind him that Jason DiLaurentis is part of his family too.

Aria pays Ezra a visit at his apartment. He says he knows he promised he wouldn’t come back to Rosewood, but he doesn’t really have anywhere else to go. Ezra says he heard that Alison lied and said she was kidnapped, and he heard Mrs. DiLaurentis was murdered. He doesn’t think there is any way that Shanna murdered Ali’s Mom though — because she was in NYC when it happened. He has no idea that Shanna is dead; he warned Aria to watch out for her.

Emily is working with Sidney in the locker room and discussing her stroke per minute. Paige tries to join them, but it becomes super awkward and Emily storms out.

Aria meets up with Alison and tells her that Ezra is not going to spill her secret about not being kidnapped. But, she warns her that Ezra has no idea that Shanna is dead. She hands over the manuscript to the book Ezra wrote about Alison, and leaves.

Hanna and Emily sneak off to the building in Philadelphia where they followed Jason to the other day. They find the homeless-looking guy named Arnie outside and question him about why Jason came to the building. They learn that the abandoned building is a “dry house” where Jason went to get sober.

Spencer finds Jason in his house, packing his bags. He says he is leaving because he thinks his house is haunted; it is messing with his mind seeing Alison around the house. Spencer shows Jason the email that Jessica sent the night she died, saying, “I can’t protect you anymore.” Spencer speculates that his Mom was killed by whoever she “couldn’t protect anymore.” Jason warns Spencer to just “cut her losses and get out while she still can.” Before he leaves he reminds Spencer not to trust her father.

Hanna and Emily head to the café in Rosewood. Hanna sees Mona and calls her out. She wants to know why Mona took her to glamour boot camp and tried to turn her into Alison. Mona says that she should be thankful she changed her.
Spencer fills Aria in on Jason’s alibi, and that Jason thinks that she shouldn’t trust her Dad. Spencer thinks there is a chance her Dad killed Mrs. DiLaurentis because he thought that he was covering up for Spencer.

Alison is walking down the street in the dark and runs into Mr. Hastings. He can’t believe she is out alone at night after what just happened to her. He wants to give her a ride home to make sure she is safe.

Emily arrives at home and finds Paige sitting on her porch waiting for her. She tells Paige that they are over, and may be someday they will be friends. Paige pleads that she loves Emily, and turns to leave. Emily tries to comfort her and tell her she deserves the best, but Paige doesn’t want to hear it.

Spencer’s Dad returns home; Spencer shows him the email that says, “I can’t protect you anymore.” He folds the paper up. Melissa storms in and tells Spencer to leave their Dad alone. She takes the email from her Dad and tears it up. Mr. Hastings tells them both to stop arguing and he doesn’t want any more “friendly fire.” Melissa tells her Dad that maybe they should tell Spencer the truth. Mr. Hastings shuts her down and tells Spencer to go upstairs.

Aria heads back to Ezra’s apartment; she knew that Alison was going to show up and harass him after she gave him the book. Aria confesses to him that she killed Shanna in NYC after she left the hospital. Ezra doesn’t seem shocked or upset. He just asks what he can do to help.

Hanna decides it is time for a change and heads to the hair salon. Little does she know Mona and someone else are watching her through a foggy window.