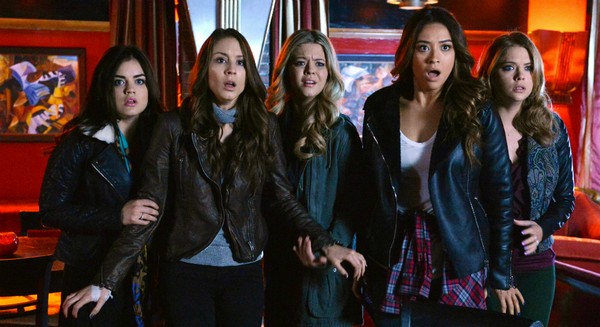 Pretty Little Liars returns to ABC Family tonight for the seventh episode of season five. Tonight’s episode is called “The Silence of E. Lamb” and Aria does volunteer work at a mental hospital and crosses paths with an aggressive patient. Meanwhile, Spencer borrows some of Ezra’s spy tools; Ali clashes with Caleb, which makes things awkward for Hanna; and Emily’s mom invites Ali to dinner.

On the last episode, with the town of Rosewood trying to get back to normal, the PLLs – especially Ali – were far from okay after the latest “accident.” Thinking that it wasn’t the right decision to come home after all, Ali started to consider leaving for good. But Aria, Emily, Hanna and Spencer were determined to keep her safe in Rosewood and to figure out who and what was behind this latest incident. Did you watch the last episode? If you missed it we have a full and detailed recap, right here for your enjoyment.

On tonight’s episode Aria begins her volunteer work at Radley and quickly gets down to business finding any answers she can about a patient of interest to the Liars. But she quickly hits a snag when she comes across an aggressive patient that may be the key to what the Liars are looking for. Also searching for answers, Spencer takes a note from Ezra’s play book by borrowing some of his spy equipment to keep a closer eye on the home front.  Meanwhile, Hanna is caught at odds when Ali and Caleb butt heads, and Emily seeks help from her friends when her mom invites Ali over for dinner.

The seventh episode of season five’s PRETTY LITTLE LIARS is going to be really exciting and we’ll be recapping it for you right here. In the meantime hit up the comments and tell us who you think is really A!

Tonight’s episode of Pretty Little Liars begins with the Emily arriving at school with her Mom, her Mom tells her to invite Alison and the rest of the girls over for dinner later. Her Mom wants Alison to know that she is here for her. Emily heads to the bathroom with the rest of the liars and invites them over to dinner, Aria says that she will be busy at Radley trying to get to the bottom of the Bethany Young mystery. Spencer will be busy helping Ezra move his research and spy equipment in to Aria’s attic. Hanna is stuck going to dinner with Alison and Emily, and she isn’t thrilled about it.

The rest of the liars leave and Sidney comes out of one of the bathroom stalls, she had been listening to their entire conversation. She tugs on the scarf that Alison is wearing around her neck to cover the choke marks from “A.” Sidney says her scarf is beautiful. Afterwards Sidney tells Emily that Paige found a dead rat in her swimming locker. Emily confronts Mona about the dead rat, but Mona says it “has boy written all over it.”

Hanna finds Caleb in the quad, and he says he is taking some exit exams. Hanna vents to Caleb about being dragged to Emily’s for dinner. He tells her she should just cut Alison off, but Hanna is afraid she will lose her other friends too.

Aria heads to Radley to volunteer, and runs in to Spencer’s friend Eddie. Eddie tells Aria he “feels like they have met before,” but Aria insists they have never met before.

Back at school Alison runs in to Caleb, Alison curtly informs him that he doesn’t know her at all. He counters, “I know you form what you have left behind, you’re like a tornado.”

At Radley Aria meets Bethany Young’s old roommate Rhonda, and Rhonda calls her a thief when she sees that Aria has the drawing Eddie left on Ezra’s door step.

Spencer sees Melissa at home, she is cleaning out the barn. She says that Spencer’s “sober buddy” left food out when he was fired. Spencer takes the trash bag out of her hand and says she will clean up the mess, a dead mouse in a trap falls out on the ground and Spencer screams. Melissa picks the mouse up off the ground and throws it in the garbage can.

Caleb shows up at Hanna’s house because she sent him an SOS message. When he walks in Hanna immediately starts yelling at him and asks him what he said to Alison because she is furious. He tells her it doesn’t matter because she is going to dump Alison anyways. He takes out a beer and says that he is celebrating his freedom, because he walked out of his tests at school.

Spencer arrives at Ezra’s house to help him move his stuff, he says they are taking it to his friend’s shed. She asks him if she can borrow one of his cameras, because she wants to “keep an eye on someone.” Once they get all the boxes moved in to the shed, Spencer thanks him for showing up on the roof and helping them in NYC. Spencer confesses that the camera is to watch her sister Melissa, she knows she is connected to everything.

At Radley, Rhonda tells Aria that Bethany gave her that painting and she’s a thief, and people cut hands off from thieves. Aria gives that painting back to Rhonda and Eddie Lamb interrupts before she can ask Rhonda about Bethany Young.

Emily shows up at Hanna’s house and asks her why she lied about having cramps in her text and is ditching dinner. Hanna asks her what is going in between her and Alison. Emily says Ali is just “really needy.” Hanna caves and agrees to come to dinner.

Aria waits until Rhonda goes in to the bathroom to take a shower, and sneaks in to her bedroom and starts going through her drawers. None of the shower stalls are free so Rhonda comes right back, Aria hides under Rhonda’s bed while she lays on it.

Hanna shows up at Emily’s to have dinner with her mom and Alison. Alison takes Hanna aside and asks her if she dealt with Caleb yet. She reminds her she has to “do the right thing for everybody.” Hanna calls her out and asks her how she can tell her not to see Caleb. Alison heads in to the dinner table, and Hanna sneaks a drink of Mrs. Fields’ liquor.

Aria finally gets out of Rhonda’s room, and heads to her car in the dark parking lot. Eddie Lamb stops her in the parking lot and asks her what she is looking for. Aria doesn’t answer and says she is late and has to go, she hops in her car and drives off. After she leaves Eddie calls Ezra on her cell phone.

At Emily’s awkward dinner, Hanna is drunk and Alison is going on and on to Mrs. Fields about how horrible it was to be kidnapped. Hanna keeps mocking her and making snide comments. Alison volunteers to help Emily’s mom clear the table. After they leave Emily sniff Hanna’s drink and realizes she has been drinking straight vodka.

Aria heads to Spencer’s and shows Spencer the drawing book that she stole out of Rhonda’s room, it used to be Bethany’s sketchpad. They realize one of the drawings are of Toby’s mom falling off the roof at Radley and another drawing is of Mrs. DiLaurentis with devil horns.

At home Spencer and Melissa are arguing, Spencer says that Melissa took their Dad’s side. Melissa doesn’t want to fight with Spencer, but Spencer says that love can’t fix their family. Their problems are from whispers, and secrets, and bodies buried up and down the street. Melissa reassures her that it is still about love, and sometimes people do things because of love.

After Hanna and Alison leave, Emily asks her mom why she wanted Alison to come over so badly. Her mom confesses that she knows Emily thought of her as “more than a friend” before she left. Her Mom informs Emily that the story she told about being kidnapped has some holes in it, and she doesn’t have to keep saving Alison.

Hanna has coffee with Sidney at the café while she tries to sober up. She drunkly confesses to Sidney that she could never make up with Jenna because of what happened in NY with Shanna. When Sidney leaves, Caleb shows up and sits down with Hanna. Hanna wants to talk about their relationship, or lack of. She says there is no “her and Travis” when Caleb is around. Caleb argues that Ravenswood changed him, and he learned things about his family. Hanna starts kissing him, and he kisses her back.

Spencer is watching the camera she set up outside of the barn to watch her sister Melissa, and she sees Alison walking through the backyard in the dark. Spencer texts Emily and Aria an SOS message. As Aria is leaving Ezra shows up on her doorstep, and reveals that Eddie called him after she left Radley and he went to meet Eddie, but he is now MIA. Hanna shows up at Spencer’s and Aria and Emily are already there. Spencer, Aria, and Emily receive a text from “A”, but “A” doesn’t send it to Hanna. It says “Alison is keeping secrets and so are you, I know because of Hanna’s big fat mouth.”