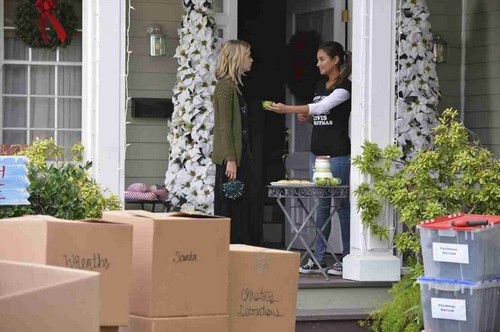 Pretty Little Liars continues to be one of the my favorite series, another amazing episode!  Were you surprised to learn that Melissa the one who buried Bethany Young alive?  If you are like me and you are anxiously awaiting each episode, we have managed to get our hands on a sneak peek video and some spoilers to whet your appetite for next week’s episode 12 Summer Finale called “Taking This One To The Grave.”

On tonight’s episode,  Melissa finally told Spencer what she knew regarding the night Ali disappeared. But what is Spencer supposed to do with the knowledge? Knowing something is off about Alison’s story, Emily was on the hunt for answers on her own. She enlists Ezra’s help in finding out more about Cyrus and his past connection to Alison.  Meanwhile, Hanna asked Spencer and Toby for help with Caleb’s drinking problem.  Spencer received a shocking video from Melissa after she left town, confessing that she was the one who buried Bethany Young alive.  The liars realized that Alison was much more sinister than they thought, and they thought she might actually be “A” and was trying to take them down.And lots more happened — did you watch the episode? If you missed it we have a full and detailed recap, right here for you.

Spoiler alert: If you’re one of those people who doesn’t like spoilers, stop reading now! We have some juicy spoilers for you about the season 5 episode 12 Summer Finale of ABC Family’s “Pretty Little Liars.”

Official ABC Family synopsis of next week’s episode: “With Alison leading them down a dangerous path and “A” barring them from telling the police the truth, Aria, Emily, Hanna and Spencer feel trapped and are desperate to find a way out of this mess. With nothing else to lose, could the PLLs lose everything by putting their faith in a possibly untrustworthy ally?”

On next week’s episode Feeling trapped by Alison and “A,” the PLLs turn to an unlikely person for help.  Meanwhile, Alison begins to build up her own army now that the PLLs have turned their back on her.