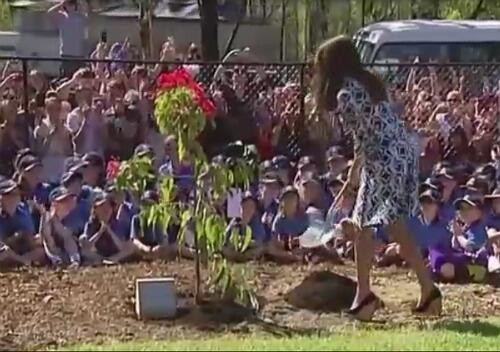 Prince William and Kate Middleton continued their well-documented tour of Australia today. Last year William and Kate visited the scenic Blue Mountains just outside of Sydney, Australia. The Royal couple returned to the same village today, however nothing in Winmalee is the same as it was last year when they visited.

Last October, nearly six months ago, brush-fires tore through the town of Winmalee and devastated over 200 residents’ homes. William and Kate met with some of the people who had lost their homes during the brush-fire and met some of the firefighters who battled the blazes last Fall.

BBC News spoke to some of the residents of Winmalee after they met with the Royals, and they appeared smitten with the young couple. One woman told the news reporter, “For them to come out, you know all this way to say ‘hello’ and to speak to my children, and to say ‘I’m sorry this happened to you’-means a lot.” Another woman joked about how “warm” and “kind” William and Kate were. She bragged about receiving a kiss from the Duchess of Cambridge and claimed that they were going to her house later for tea.

After meeting with the residents of Winmalee William and Kate attended a ceremony with the Girl Guides. The Guides planted a tree in the Royals’ honor and sang a song to the Duke and Duchess. When the ceremony was over they went sight-seeing and checked out a scenic Australian landmark “Echo Point.”

What do you think of the latest leg of the Royal’s Australian Tour in Winnmalee? Share your thoughts in the comment section below.