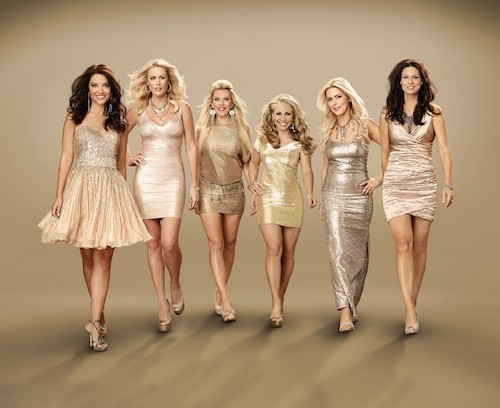 Tonight on TNT their new reality show Private Lives of Nashville Wives continues with a second episode called, “Fun Sponge.”  If you have never watched the show before set in and around the capital of the high-stakes country music business, Private Lives of Nashville Wives will follow a group of accomplished, opinionated and driven women as they deal with professional challenges, family issues and social relationships.

On last week’s episode against the backdrop of The Music City, six of Nashville’s most prominent women are searching for their place in Southern society. The premiere episode introduces viewers to the wives during the most important week of the year in country music, the CMA Music Festival.

On tonight’s episode it is girls’ night out in Nashville, but not everyone has the same definition of fun. Erika questions whether being a stay-at-home mom is fulfilling enough now that the kids are in school, while Cassie and Gary Chapman are dying to have a child of their own…but a life-altering phone call…

Tonight’s episode is going to be filled with the usual Housewife drama and you won’t want to miss it, so be sure to tune in for our live coverage of the show tonight at 10 PM EST! While you wait for our recap hit the comments and let us know how excited you are about the new season of  “Private Lives of Nashville Wives”

Erika is a stay-at-home mom and shows off her empty closets, and clean house to Cassie. She digs deep in her bedroom drawers to show off some of her fun role-playing outfits. Erika talks about how much she enjoys hanging out with Cassie.

Cassie shares that when she met her husband Christian singer Gary Chapman, he had almost nothing after losing big in real estate. Erika shares that she’ll be alone for a few days while her hubby singer Bryan White will be out of town. Once Erika mentions being alone and without the kids, Cassie insists on a girls night out.

Sarah is hanging out with her band and they are talking about their upcoming show. They get in a nice practice.

Meanwhile, Cassie’s hubby Gary is busy changing diapers as she comes in to check on baby Eva Rose. The couple adopted the baby and have only had her for 5 days. The birth mother has up to ten days to change her mind..so it is stressful for the family. The birth mother comes for a visit and while Cassie is very nice and kind, she is equally nervous as she sees her daughter and birth mom bond.

Erika is nervous her young boys are going with dad because she is very nervous and used to being with them to ensure all is well. Erika gets the boys packed up and gives them their reminders. Erika says that while she trusts her hubby, she knows men don’t think like women and are usually not as prepared for little things. Erika tears up as the boys and Bryan take off.

Cassie talks about her upcoming Sip and See party…where her lady friends come over and sip champagne and see the baby. She breaks down a bit talking about her fear that she’ll get a call that Chelsea, Eva Rose’s birth mom will want her back.

Sarah is getting everything prepared for her gig at a new venue. She clarifies that she didn’t get anything handed to her because of her famous hubby. She has put in the work and has the talent to make it on her own. The band eats and bonds.

Erika put a girls’ night together and hopes to dance. Her friend Laura is doing her hair. Cassie shows up after her hubby told her to get out and have some fun. The girls head out and stop to pick up Jenny, who flew into town just in time for the special night. Jenny dons a black baseball cap with a dress, while all the other ladies are definitely dressed for a night out. Jenny explains she just took her extensions out so she needed to wear a hat. Okay…we can understand a hat, but a baseball cap that says “I bring home the bacon” is another story!! Erika mentions her hair is thinking and Jenny just goes off on how no one likes pretty girls that say they are ugly, skinny girls who ay they are fat, and on and on. She gets personal and she ends up killing the mood.

Good thing the limo is ready to pick up the twins, Ana and Betty. Now they are heading out to Nashville. So Erika picked a spot she wasn’t familiar with. They find it walk in, and it is almost empty. Immediately, Jenny is complaining that she wants a more wild spot where there is dancing on the tables and people are more rowdy. While the twins seem annoyed as well, Jenny is the most vocal thanking Erika for “bringing us to a library” for girls’ night out. The ladies try to get the party started by ordering drinks. The waitress, sporting a shiner, offers moonshine. Erika decides on wine and the twins roll their eyes. Before they know it, Tina Brady shows up. She is well-known in Nashville. Cassie has a gift for Erika..a new outfit for her role playing adventures. Ana encourages her to put on her outfit. Ana brings out some hula hoops for the girls and forces them to get up. Ana is getting annoyed with how straight-laced Erika is being. Ana decides she is going to take the beer maiden outfit and put it on to piss off Erika. Her plan worked and Erika is really upset but doesn’t say anything. After Jenny encourages her to take a shot and she refuses, Jenny and Ana sit away from the group and talk about how lame the party is.

Meanwhile, Sarah’s band is playing to a dead crowd. No one is paying attention, lots of open seats, and most people are more worried about eating than listening. No one was dancing. After a short time, Sarah and the band pack up.

A few days later, it is a very special day for Cassie and Gary. Today their daughter officially becomes theirs, but Cassie will be nervous until 2:30 (the official time the adoption will become final) as she is still in fear of a call from the birth mom. Her party is beginning and guests are starting to arrive. As Cassie is opening gifts and guests are chatting, they hear a ring. It is Gary’s phone, but just the alarm to let them know it was now official that the Eva Rose belongs to them, legally.

Later, at Jenny’s house, Ana comes over and the girls trash Erika because she was too conservative. Jenny calls Erika a “fun sponge” because she sucks the fun out of things. Ana and Jenny plot to tell Erika how they feel to see how she’ll respond. Just like high school girls, Ana and Jenny decide that if Erika’s response is apologetic and grateful, they will continue to be friends with her.

Next week should be interesting as JT suggests adoption to Jenny, Erika is feeling insecure and unprepared for auditions, and Sarah’s marital problems are on full display. Tell us what you think of this new show! Who is your favorite troublemaker?