Project Runway All Stars Premiere Recap: Season 4 “Made in Manhattan” 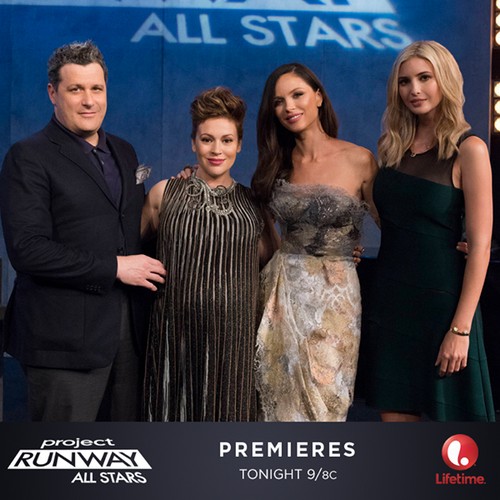 For those unfamiliar with the show, fourteen of the most talented Project Runway designers return to compete in the biggest and most competitive Project Runway All Stars season ever! In this cutthroat season, former standout designers come back to New York to compete for runway gold.

Tonight’s episode of Project Runway All-Stars kicks off with the designers introducing themselves.  Season 4’s All Star cast includes:

Alyssa Millano joins the all-stars, and reveals that they added returning winner Dmitry and Michelle to the cast.  This season there will be no immunity, their mentour will be Zana, of Marie-Clare magazine.  Their first challenge will be a team competition, but they will be judged individually.  They will be divided in to two teams – boys and girls.  The boys will be creating designs based on down-town NYC, and the girls will be creating designs based on up-town NYC.  Each collection has a budget of $1500 to spend at Mood fabric store, and the designers have 24 hours to put their designs together.

The girls head up-town to get inspired for their collection.  Michelle decides to put together a small, yet expensive leather dress with suede cut-outs.  Meanwhile, the guys head down-town, and Fabio is sketching an edgy jump-suit.  Chris is working on a flannel look, Ben has decided to put together a silk dress.

After a whirlwind trip to Mood fabric stores, the all-stars head to the design room and check out the sewing machines.  They begin unpacking, and chaos ensues.  Somehow during the mayhem at the fabric store, Fabio’s fabric wasn’t cut and paid for.  He begins panicking, and has no idea what he is supposed to do.

The all-stars’ mentor Zanna Rossi arrives to check in on the designers.  First Zanna bursts Michelle’s bubble and says that the judges may think she is doing too much with the suede and leather.  She informs Patricia that her flower dress is way too Bohemian, and not up-town at all.  Zanna informs Kate that she needs to make her dress more modern.

Zanna doesn’t exactly take it easy on the guys either.  She tells Benjamin that he is going to have to make several changes to his design – because his dress doesn’t look don-town at all.  However, she does like Chris’s flannel kilt.  After Zanna leaves the workroom, the designers’ models arrive for their fittings.  Michelle is having a tough time working the leather on to her model.

The next day the designers return to their workroom to put finishing touches on their designs before the runway show.  The models arrive to be dressed for the show, Fabio is thrilled when he gets him jumpsuit on his model and thinks that it looks perfect.  The designers head to Mary Kay studio to pick out their models’ hair and make-up looks.
The models head to the runway for the first Season 4 All-Stars fashion show, the designers take their seats.  And, Alyssa Millano and the other judges – Georgina Chapman, Isaac Mizrahil, and Ivanka Trump take their seats and take notes as the models parade down the runway in their Up-Town and Down-Town designs.

After the runway show the judges announce that the guys have won, and their collection was better than the girls up-town collection.  Alyssa announces that Gunnar, Dmitry, Sonjia, Sam, Justin, Alexandria, Helen, and Jay are safe and can leave the runway.  The guys top three are: Chris, Fabio, and Ben.  The bottom three girls are Kate, Patricia, and Michelle.

The judges critique the top three designers and bottom three designers on the runway.  Kate’s dress wasn’t a hit, her split is too high, and the breasts are augmented with too much fabric.  Michelle’s dress’s fabric wasn’t a hit, Alyssa says it looks like car seat fabric.  Patricia’s dress’s breast darts are not appealing, and the fabric looks dingy or dirty.
After careful deliberation, the judges announce that this week’s winning designer is Fabio.  And, Patricia is officially eliminated.